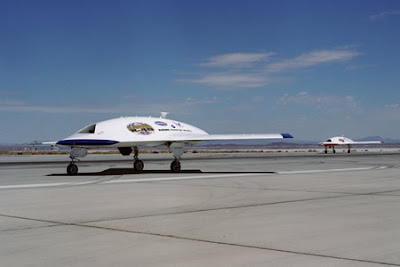 Mr. Robert Horton, UAV Test Pilot and Senior Manager at Boeing Company, gave the keynote address at the AIAA St. Louis Section annual Awards Dinner on May 12. He gave a fascinating inside view of the Boeing X-45A program that paved the way for the current Phantom Ray demonstrator rolled out earlier this week. His presentation provided a balanced overview and technical description of the program that was appreciated by both engineers and non-technical enthusiasts alike.

After retiring from the USAF in 2000 as a B-1B Offensive Systems Operator, Mr. Horton searched for an opportunity to remain in military aviation programs and joined the Boeing Unmanned Combat Air Vehicle (UCAV) X-45A program team. The X-45A program then under development was designed to demonstrate technology needed to perform unmanned combat missions as a force enabler for U.S. armed forces. The 2 X-45As went on to perform multi-vehicle coordinated operations at the height of the test program.

The 2 air vehicles were built around several design constraints and technical requirements. One was the need to store the aircraft in an enclosed container that allowed for systems testing while in storage. This requirement in part led to the small size – 8,000 lbs empty weight and 34 foot wingspan – and detachable wings. Another was the use of off-the shelf components, such as F-5E/T-38 landing gear and Honeywell F-124-GA-100 small jet engine, were used where available to save resources and development time. Also, all-electric systems were used to allow for computerized testing and control and for the avoidance of multiple hydraulic systems prone to leakage (except for nose gear). These requirements were incorporated due to customer request or to concentrate the development effort on the essential avionics and guidance systems.

The vehicles were constructed of aluminum and composite skin, and had two weapons bays. The avionics pallet was positioned in the right weapons bay, and the test weapons were housed in the left bay. Other features, such as thrust vectoring nozzles and stealthy jet intake, were incorporated as proven design features rather than as part of advanced flight test concepts. Of course, the most important aspect of the aircraft was the avionics suite, which provided the capability of autonomous simulated combat flight with pilot override.

During the flight test program, which lasted from May 2002 through August 2005, both test aircraft accomplished their mission goals of successfully flying autonomous system test flights and weapons delivery, including missions with both aircraft simultaneously flying separate simulated combat missions and returning to Edwards AFB. The aircraft flew among other aircraft, including within traffic pattern, and were monitored by crews at Edwards AFB in California and from Boeing’s facility in Seattle, Washington on the same mission. Four Boeing pilots (including Robert Horton) and 2 U.S. Air Force pilots participated in the flight tests. During one weapon delivery, an inert GPS-guided weapon released from an X-45A landed within four inches of the target vehicle on the NAS China Lake Weapons Range!

Following the X-45A program, the X-45B and X-45C programs would have incorporated the successful elements of the X-45A into larger, combat-capable platforms. However, they were cancelled before operational prototypes entered flight test programs. The current company-funded Phantom Ray continues in place of the cancelled programs, and will be the platform to prove the practicality of the autonomous, air-refuelable unmanned combat air vehicle.

(Content of this article based on the presentation given by Mr. Robert Horton, May 12, 2010)

Posted by Carmelo Turdo at 2:54 PM