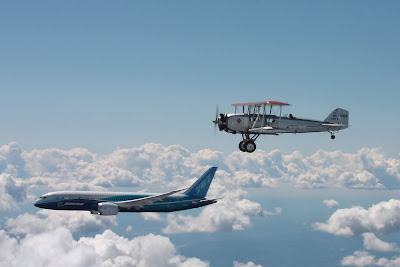 EVERETT, Wash. The Boeing Company's (NYSE: BA) latest addition to its lineage of pioneering commercial airplanes, the 787 Dreamliner, on May 8 caught up to its ancestor, a Boeing Model 40, in the skies over Mount Rainier south of Seattle.

The fully restored 1928 vintage Boeing Model 40, owned and flown by Addison Pemberton of Spokane, Wash., is the only flyable Model 40 in the world and the oldest flying Boeing aircraft of any kind. The Model 40 not only is notable as Boeing's first production commercial airplane, but its innovation and efficiency were the deciding factor in Boeing Air Transport (the airline subsidiary of the Boeing Airplane Company) winning the lucrative Oakland-to-Chicago air mail route in 1927. That event set William Boeing on a course that, within just two years, would take him from managing his airplane company in Seattle to presiding over a vast nationwide aviation empire called United Aircraft and Transport Corporation (UATC).

Taking a very short break from the 787 program's intensive flight test program, Boeing Chief Test Pilot Mike Carriker expertly maneuvered the first 787, ZA001, into formation with the Model 40 at 12,000 feet to allow photographer Ryan Pemberton, flying in an A36 Bonanza, to line up for the striking photo.

"It really took a lot of work and planning," Carriker said. "When I came alongside the Model 40 against those big puffy clouds it was unbelievable: Here is this 1928 biplane flying with a 2010 airplane side by side. How amazing the history of The Boeing Company is – it was really exciting."

Posted by Carmelo Turdo at 1:01 PM