The Aero Experience would like to promote a new book that traces the route of "The Lindbergh Line," the primary cross-country flight path used by Transcontinental Air Transport, later TWA, a staple of Midwest Aviation for many decades.  We will let the author, Mr. Robert Kirk, describe the book in his own words, and we encourage our audience to get a copy or two at  www.authorhouse.com and Amazon.com.


Last July my wife and I flew our small airplane across the U.S. to retrace the old Lindbergh Line. This series of 12 airports/stations, approximately half of which were built by the Transcontinental Airline Company, or TAT, was named the Lindbergh Line.  It was named after Charles Lindbergh who was hired by TAT to be the head of their technical department and select the locations and oversee the building of the airports. This story is about the first coast-to-coast airline passenger service in the U.S. Its goal was to cross the country in 48 hours. In 1929 the trains took four days and four nights to take passengers across the country.

I researched the history of TAT and its airports and along with it, utilized information gained at the visited locations, libraries and museums to write the book about TAT. The book is titled Flying the Lindbergh Line: Then and Now. It includes over 225 photos that show what the airports were like in 1929-30 and what they are like today. 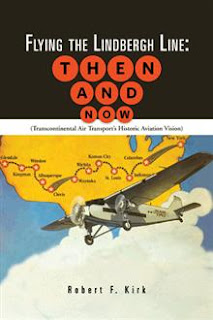 Relive the vision of TAT’s “Lindbergh Line” that began the first scheduled coast-to-coast airline passenger service in 1929. Fly with the author as he retraces in words and photos this historic route across America. Flying in the early 20th Century was dangerous business. Aircraft were made of sticks and cloth and their engines failed at an alarming rate. Those who flew experienced a high incidence of accidents. Almost every pilot had stories of seized engines, landing or takeoff mishaps, becoming lost, bad fuel, dangerous weather and lost friends.

﻿﻿
However, some saw this stumbling attempt to master the skies as an opportunity to bring the human race forward. They had a vision of stylish travel across the ground and into the heavens with comfort, speed and profit. Such was the vision of Transcontinental Air Transport’s Lindbergh Line that began the first scheduled coast-to-coast airline passenger service in 1929. It teamed with aviation visionaries Charles Lindbergh and Amelia Earhart to build a new industry. That industry’s successful struggle evolved into our modern airline passenger service, one that carries us across the continent and across the world.
Posted by Carmelo Turdo at 10:59 AM