Ministry Uses Aircraft to Care for Children in Guatemala, Part One: The Midwest Aviation Connection

Caring for over fifty foster children in southwest Guatemala is a challenging, and very rewarding, mission fulfilled daily with love by the Manos de Compasion (Hands of Compassion) children’s home ministry. Nestled within the wooded landscape near the Bay of Santiago Atitlan and between two volcanoes, the Manos de Compasion property includes five houses, a school, gardens, livestock and…an airstrip. And now, a newly-arrived airplane. That airplane, and the support of missions aviation, has united members of the St. Louis, MO aviation community to the work of Manos de Compasion.

The airplane, a twin-engine Piper Geronimo, arrived at the Manos de Compasion airstrip on February 27 after a layover in Guatemala City since leaving St. Louis three weeks earlier. But that was the shortest portion of the journey. This aircraft has been working its way from the Louisiana/Arkansas border to Big River Aviation in the St. Louis, MO area during a nearly two-year restoration process culminating in the delivery flight to Guatemala last week. More of this story, and the work of the Manos de Compasion ministry, will unfold in Parts Two, Three and Four of this series.

The current Director of Manos de Compasion, Dave Reichard, and the former Director and Dave’s father-in-law, Tom Stukenberg, visited Big River Aviation at St. Louis Downtown Airport several times between November 2019 and February 2, 2020 as the aircraft was nearing completion. They participated in evaluation flights following the most recent aircraft updates and assisted in trouble-shooting some stubborn mechanical and electrical issues.

“We ended up here in St. Louis through a chain of references, actually starting in Guatemala with some other bush pilots down there,” Dave Reichard told The Aero Experience. “The big issue was that the plane we had purchased was in the middle of nowhere, and we didn’t know any mechanics down there. Luckily, Paul Voorhees at Big River Aviation decided that he would take on the challenge and head down there. Then we flew it up here, my father-in-law and Nick Turk with Turk Aviation. Then the work started here…”


Paul Voorhees describes the situation after arriving to inspect the aircraft. “The airplane was gutted from nose to tail. Everything in the nose compartment, all the air ducting going to the heater. The nose gear was not even connected. The steering was all disconnected. All the electrical had been removed out of the nose and was all just piled up around this hangar. It had no electricity…It took six trips.”

“The plane will help us as a ministry," Reichard continued. “My father-in-law had a plane down there years ago, and it worked wonderfully. It was a great help…God ended up providing for a plane, we found a plane, and now it’s finally fixed and we’re excited to use it again. This isn’t new for this ministry, having a plane. We’ve used it before, and it was very advantageous.” 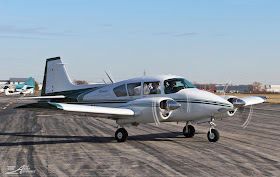 “There, flying saves us weeks of our lives,” Reichard told The Aero Experience during a break in the work at the Big River Aviation hangar. “We calculated that if we only flew to Guatemala City once a week for a year, we would save about sixteen days of travel time. The plane helps us spend more time with these kids preparing them and helping them for their future.”


Tom Stukenberg agreed, having flown a similar type of aircraft in previous years.  “It’s a real time saver. There are little tiendas [stores] that are not able to supply for fifty kids between the different houses. We have to buy all the groceries…There’s a Price Mart in the city, it’s like a Sam’s Club or Costco, and we buy the stuff there that we can along with the local vegetables from the market...That’s where the airplane really comes in handy.”

Upon the aircraft's arrival in Guatemala, Paul Voorhees of Big River Aviation wrote this on his Facebook page: “Mission accomplished! Thanks to all that helped get this ready for service. Steve Long, Kevin Hammon, Nicholas Turk, Wayde Spenner, Brandon Schnicker, Mike Read, Nelson Miller, Trinity Propeller, Wings Of Hope and anyone else that helped the Big River Aviation team! I look forward to helping Dave Reichard and Tom and Susan Stukenberg keep this plane in service!” We will include many of these contributors in the next several parts of this series.


Nick Turk, of Turk Aviation added, “Steve Long’s One Spirit Engineering, and Paul Voorhees’ Big River Aviation, spent thousands of dollars and hundreds of man hours on the Geronimo project. Many of the systems on this 60 year old plane were checked, repaired or overhauled. Engines were tuned and operated after years of neglect…The panel was rebuilt by Steve Long, avionics repaired, ADS-B installed, circuit breakers replaced fuses, state of the art engine analyzers discounted from Electronics International were installed adding a nice digital touch to the panel. After a few flights the radio stopped malfunctioning, fuses stopped popping, engines kept running, and the heater worked.” 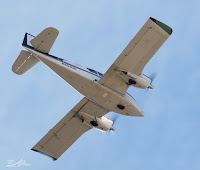 All told, returning the aircraft to service for the Manos de Compasion children’s home was a significant achievement for all involved. The Aero Experience was privileged to cover the process from the St. Louis area over the last year, and we will provide detailed coverage in the next three editions that we will post over the next week. We thank Big River Aviation, Manos de Compasion and all involved with this aircraft restoration and its return to service in the mission field. Check back frequently for the next three parts of this amazing story!

We hope that you will support the great work of Manos de Compasion by contributing directly to their ministry. Please consider visiting their website and making a generous donation to support their work as a foster family to these beautiful and wonderful children!
Carmelo Turdo at 3:51 PM