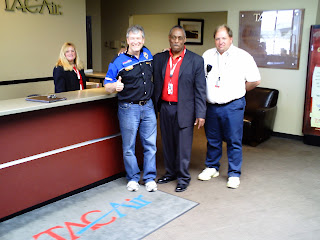 Spirit of St. Louis Airport hosted the fifth leg of Michael Combs' Flight for the Human Spirit this morning at the TAC Air terminal. Michael and his wife Michele are on a 50-state, 19,000 mile U.S. tour in a Remos GX light sport aircraft to encourage everyone they meet to follow their dreams. This flight is special not only as a piloting and logistical accomplishment, but more importantly, as a personal triumph that has its roots in near tragedy. In the few minutes that Michael was on the ground with us, he related the purpose of the Flight for the Human Spirit and what he hoped to accomplish along the way. 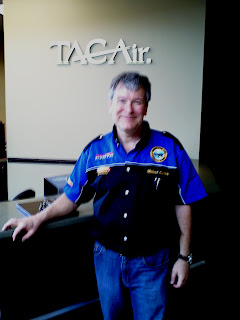 "I had always wanted to fly - always - and forever had put it off. I became very ill in August of 2003, and it hit me a few months after that as I was recovering that I was never going to fly," Michael explained. "And it weighed on me like a ton of bricks. As I got a little better, there was an article in Popular Mechanics about light sport aircraft industry - it was a new class (of plane) that was coming out - and it buoyed my spirits. And I promised myself that when, not if, but when I get well, I will live my life with no regrets. So that was the beginning of the Flight for the Human Spirit." Michael has since obtained his Light Sport pilot's license and embarked on an airborn mission to tell 20 million people (including you now) that it is never too late to follow your dreams.

And so the flight has begun, and on the second day of the journey, Michael and his wife Michele landed at Spirit of St. Louis Airport at around 10:30am on the fifth leg of the journey, which began this morning in Columbia, MO. "I would not have missed St. Louis - there is so much aviation history here," he said. He described the flight as "smooth and very scenic - one of the best flights I've ever had, I mean ever!" Despite some heavy winds in Kansas City yesterday, the flight is proceeding as planned. Spirit of St. Louis Airport was picked from among the local airports because it was just the right size for a quick refueling stop with a light sport aircraft (he needed 4 gallons to top off). The flight is planned to last 40 flight days, or 63-75 total days. And yes, Michael plans to arrive in Hawaii, though not on his own tank of gas. That leg will be accomplished in the cargo hold of a cargo jet or ship where the folding wings of the Remos will become very useful.

The Remos GX aircraft being used on this flight was the ideal choice. "Remos has had a good customer service history, a lot of good reviews (of the plane) and the folding wings were a big part for the easy accomplishment of this mission. The Remos Team has been fantastic to work with." The aircraft cockpit is fitted with an array of technology, some of which was custom-fitted for this flight. This is not the base model inside the cockpit! After the flight is accomplished, it will be donated to an aviation museum.

Inevitably, our conversation returned to the purpose of the flight, and Michael shared his thoughts on how all of us can make positive strides toward achieving our dreams. "No matter what it is, first and foremost, you've got to believe it," he began. "Once you believe it, you've got to start taking those daily steps. I kept taking those steps, knowing that I was on that path to accomplishment. If you do those simple things, you'll get whatever you want of life. It's never, ever too late!" He left with the thought that we should all continue to encourage others to follow their dreams as well.

Please check Michael's website, http://itsneverevertoolate.com/ for details about the flight and Michael Combs' personal story. Support his cause and make a difference in the lives of others.

"My heart quickened as we approached The Spirit of St. Louis airport. I couldn't help but think of aviation history that had been set not only here, but also around the country. Soon Hope One would be there and St. Louis would have one more event that they could be proud of for years to come. The winds were light and straight down the runway which set me up for a beautifully smooth landing. "Ah...I'm back in my element," I thought as I taxied off of the runway. My landings in Kansas weren't that good yesterday...partly because of the cross winds, but yet it seemed like I just had lost that smooth edge that I had been so dedicated to obtaining over the last few months.

Wes, Phil, and the team at TAC Air were fantastic. They greeted us at the airplane with a warm handshake, and a hearty welcome to St. Louis. They graciously topped off the tank, and helped us with the management to contact when we reached the next TAC Air in Lexington, (thanks TAC Air St. Louis). I was interviewed by Carmelo who was going to put the event on his aviation blog. He had pre-printed photos for me to sign, and even brought his own Sharpie. It was great to meet him as he helped with anything that he could."

Posted by Carmelo Turdo at 5:38 PM