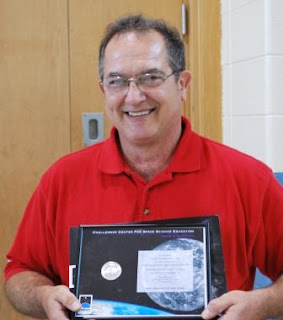 The Teacher of the Year award is comprised of a special Apollo 8 medallion originally produced by NASA in the 1960s. The medallions, containing small amounts of pure aluminum carried into space by astronaut Frank Borman, were struck in honor of Apollo 8, the first human mission to orbit the moon. They medals were originally presented to professionals who had provided support for those missions. The medallions used for this new Challenger Center award are special gifts from the late Mr. Turner N. Wiley, former Chief of NASA’s Communication Branch for Engineering at the Goddard Space Flight Center.

At his request, his gift is being used to honor students and teachers who perform exemplary work in education. Mr. Wiley stated "What better way to continue the tradition of these medallions than to reward educators who are working in both classrooms and Challenger Learning Centers to cultivate the next generation of space explorers. I congratulate and thank the five educators who are making such a profound impact on our nation’s children."