2014 AIRSHOW SEASON IN REVIEW!
GUEST EDITORIAL BY DOUG GARDNER
SUN N FUN
I’ve been a long time friend of The Aero Experience team, having seen them over the years at various fly ins and events at my home airport (Creve Coeur, 1H0) where my dad and I hangar our Great Lakes Biplane, as well as at airshows, fly-ins, and other gatherings around the region.  Outside of my ‘real world’ job doing sales with an aerospace defense company in Chesterfield, I also crew with Patty Wagstaff and Bill Leff on the side.
Having been fortunate enough to grow up around aviation and attending the St. Louis County Fair and Air Show and Fair St. Louis throughout my childhood, high school, and early college years, it’s no wonder that aviation and airshows are a passion of mine.  Being able to travel the country to various events is an amazing way to share my passion with others, as well as have a unique perspective of some of the most amazing pilots in the industry that I looked up to when I was younger and working towards my pilot’s license.
My 2014 airshow season began with the week at Sun'n Fun in Lakeland, FL.  After a brief, last minute trip to Colorado to visit my newborn nephew, as well as celebrate the 2nd birthday of my oldest nephew, I came home to St. Louis for 24 hours.  Before I left for Colorado, I had been keenly eying the weather forecast, and knew that the Sunday upon my return would be warm enough to take the Great Lakes out for the first flight of the season. Upon my arrival at Lambert, I headed straight to Creve Coeur, where I had already pre-positioned my helmet and goggles before I left town.
After my flight, it was home to pack for the next week, to work on Monday, and back to Lambert to catch my evening flight to Orlando, where I rented a car and drove to my hotel in Lakeland.  Even though Sun'n Fun is smaller and not as well attended as Oshkosh, I personally enjoy the layout and atmosphere more, as it seems more casual and laid back. While still busy with lots of opportunities, it’s not as chaotic or overwhelming as Oshkosh.

It was a fun and packed week. I spent the first day on my own, exploring the exhibit hangars in the “what do I need this year” or “I don’t need that at all, but it’s not a bad deal so maybe…” struggle, visiting the parts exchange, and the various vendor displays, where I’m able to catch up with friends such as Jerry with Great Lakes/Waco, Amy with Wipaire, and Mike with Quest.

Long time PWAS team member and friend Andy took care of the Extra during the week, while I took Patty to her various autograph sessions, sponsor meetings, and talks throughout the week. During the days when Patty flew in the airshow, Andy would take our volunteers out to the runway early for the ribbon cut, and I stayed back to get Patty strapped in and started.  Andy is an airline pilot based out of Denver, and it’s always nice to work shows where he is around (especially Oshkosh) and be able to take turns helping Patty, as well as helping each other with various show duties.

During the week, Bill Leff called and asked me to help coordinate his arrival; he would be arriving after the airfield was closed, so we chose Plant City as an alternate for him to fly into. I checked him in and was able to pick up his rental car and pre-position it at Plant City for his late night arrival the following day.  After he flew the airplane into Lakeland, and Patty was busy signing autographs at AOPA, I was able to run him back to Plant City to retrieve his rental car. Patty flew the show Saturday afternoon, and Andy and I turned the airplane while the Blue Angels were flying. Once they were done and the airfield opened back up, Patty launched back home to St. Augustine.
﻿﻿﻿
﻿﻿
﻿﻿
I went back to the performer hangar and helped Bill and his son Greg get the T-6 wired up with pyro for the night show.  Greg hadn’t worked Sun'n Fun in some time, so I accompanied him during the dark drive and walk through the airport at night to the announcer stand.  There, longtime friend and Announcer Rob Reider helped us get set up for music playback with Jay (another friend with Air Show One Sound) as well as get Greg ready for operating the remote control lights on the aircraft.  After cleanup and disposal of the used pyro, we joined the rest of the airshow crew outside the show hangar and relaxed with drinks and snacks. I spent some time catching up with Kyle Franklin and discussing his new airplane, Dracula, as well as the Great Lakes and various techniques I use while flying it.  Kyle was nice enough to let me try Dracula on for size in the hangar before we called it an evening.

Sunday morning I was able to catch up with my good friend Ashley, who is well known to many at Sun'n Fun as the head line technician and operations manager at the local FBO.  After getting a quick picture in front of the Blue Angels, and visiting with some airshow people show center, it was time to head back to Orlando to catch my flight home and go back to work. Sun'n Fun is always a great time to be able to catch up with other performers and their crew that you haven’t seen since ICAS or the previous season, including friends outside of the business, and nothing beats the front row seat to the amazing aerial performances.
﻿﻿﻿


As hard as it is to come back home to reality, it’s always nice to see the dogs I’ve missed and get a proper welcome home! 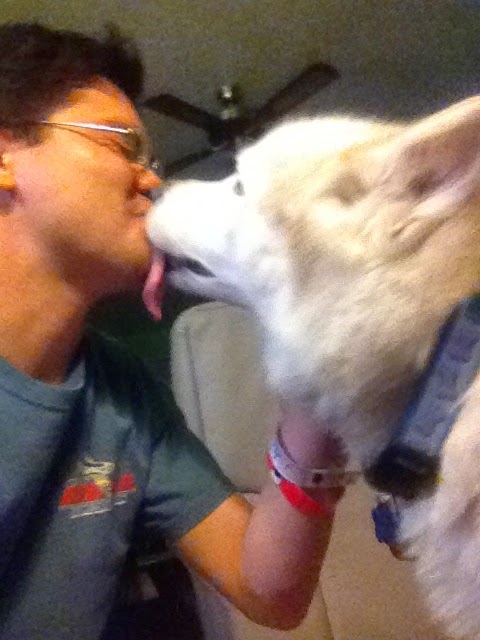 Editor's note: Special thanks to our friend Doug Gardner for this great first-hand account from Sun'n Fun 2014.  We look forward to more reports from Doug during the 2015 airshow season!
Posted by Carmelo Turdo at 9:18 PM