Pioneers of the early U.S. manned Mercury and Gemini space programs were honored June 30 at an event held to dedicate the "Liftoff" Gallery at the James S. McDonnell Planetarium of the St. Louis Science Center.  The "Liftoff" Gallery, featuring the Mercury and Gemini full-scale articles made by locally-based McDonnell Aircraft (now Boeing) in the 1960s, was a fitting backdrop for the gathering of former McDonnell Aircraft employees who designed and built America's first two types of manned spacecraft.  The occasion to honor these space program pioneers is the latest in a series of programs held over the last few years, featuring a panel discussion with former McDonnell Aircraft engineers, to commemorate the anniversaries of the spacecraft and military aircraft production at the St. Louis facility.  Several such events were sponsored by the Missouri Aviation Historical Society, and another by the St. Louis Space Frontier chapter of the National Space Society at the Gateway to Space Conference last November. 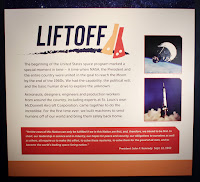 The guests for the evening gathered at the Holekamp Family Skyport, near the "Liftoff" Gallery, for the reception and tour of the gallery.  The gallery includes Astronaut Walter Schirra's Mercury back-up spacecraft, Gemini 3A Thermal Qualification Test Vehicle, Astronaut Gordon Cooper's space suit used during visits to McDonnell Aircraft to train for the last and longest Mercury spacecraft flight and other related artifacts.   Present at the reception were John F. McDonnell, former Chairman of the Board of McDonnell Douglas and currently serving on several Boards of St. Louis corporations, and Bert Vescolani, President and CEO of the St. Louis Science Center, to greet visitors prior to the main event.


Following the reception, the guests were escorted to the Orthwein Starbay upstairs for the recognition ceremony and presentation of a special award from a group of McDonnell Aircraft (later McDonnell Douglas) retirees who directly contributed to the design and construction of the Mercury and Gemini spacecraft.  The award recipients, referred by themselves as Mac's Old Team, proudly took the moniker to identify themselves with McDonnell Aircraft founder James S. McDonnell (Mr. Mac and later Old Mac) and his term for company employees as "Teammates."  The award was originally presented at the Gateway to Space Conference last November following a panel discussion on the early space programs at the Boeing James S. McDonnell Prologue Room.  The panel members decided that the award should be displayed in a public place as a reminder of the McDonnell Aircraft team's contribution to the U.S. manned space program, and the "Liftoff" Gallery was chosen as the current location.


St. Louis Science Center President and CEO, Bert Vescolani, introduced the McDonnell Aircraft veterans during his opening remarks.  "What we're doing tonight is opening one of several galleries that we are opening in the near future - that's our "Liftoff" Gallery downstairs where you saw the capsules.  For you, it means a lot more: the minds that were making them and the hands that helped craft these things.  You know them more than we could ever know them - every bolt, every decision made, the magic behind making those things.  These are the stories we love to tell our guests."   Following a short video that was presented featuring some of the McDonnell Aircraft engineers who regularly served on the guest panel during previous events, Vescolani added, "We realized during the shooting of this video how humble all of them were, how behind the scenes they were working eighteen-hour days on a regular basis.  I am proud to be in your presence."

"I want to thank all of you who have gathered to celebrate an amazing group of people who I had the joy and privilege of being able to work with first-hand and who truly changed the face of history.  They call themselves Mac's Old Team, because in his later years, Mr. Mac, when he did his PA addresses, called himself Old Mac calling all the team.  Now that they are in their later years, they have turned that around and called themselves Mac's Old Team."  He later noted, "They were people who worked for more than a paycheck.  They dedicated themselves to accomplishing what seemed impossible, and the results showed.  McDonnell Aircraft, including the people you have just heard from around this room, stepped up to the challenge...Mac's Old Team played an important role in America regaining the technological lead by successfully launching and landing astronauts six times on the moon.  Almost fifty years later, still there is no other nation that has accomplished that even once...The (Liftoff) Gallery downstairs, our gathering here, are about more than today's event.  The gallery and commemorative plaque will help nearly one million visitors each year understand a bit about the history of our great city, our great people and the amazing things we can do by working as a team."

Mac's Old Team member Jerry Roberts presented the award received by Mac's Old Team in November to the St. Louis Science Center for public display in the "Liftoff" Gallery.  He put the award in perspective.  "Mac's Old Team is really a state of mind.  Once you have worked for any McDonnell company, you are a lifetime member of Mac's Old Team.  It is something never to be forgotten.  The common thread is, 'This is Old Mac calling all the team.'  There was silence in every building around the lambert Field complex, and we knew that either a significant announcement was about to be made or that we had a distinguished visitor."  Regarding the achievements of the Mercury and Gemini spacecraft programs, Roberts added, "The biggest asset that all of us had was that we did not recognize our own limitations.  We didn't know what could not be done, so we just did it.  And this was true time, after time, after time...We were really pleased that we were at the right place at the right time to kick something like this off."  Roberts recognized other members of the group who keep the monthly luncheons on schedule and "members" informed.

The award was then presented by Jerry Roberts, Bert Vescolani and John F. McDonnell for those who had not yet seen it.  The award, sponsored by the St. Louis Space Frontier, AIAA St. Louis Section and the Space Museum in Bonne Terre, MO, features a lighted Mercury Spacecraft containing a portion of foil carried aboard Apollo 11 to the moon and back:


Following the award presentation to the St. Louis Science Center, a group picture of all McDonnell Aircraft /McDonnell Douglas employees present and the Mac's Old Team select panel was taken: 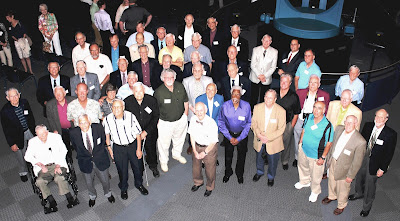 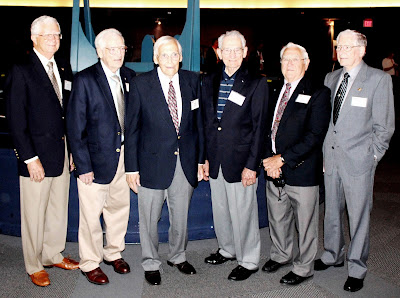 Posted by Carmelo Turdo at 7:40 PM