The Midwest Aviation community has again joined together to assist local experts monitoring the bald eagle population along the Mississippi River north of St. Louis, MO.  This year’s bald eagle census flights, coordinated by Valley Park-based World Bird Sanctuary, are flown weekly when possible through the winter migratory season.  Local pilots have again answered the call by volunteering their time and aircraft to exemplify the spirit of The Aero Experience’s new series, 2016 Year In Aviation Service.

“From late December through hopefully mid-March, I try to get a flight in per week,” explained World Bird Sanctuary Director Jeffrey Meshach.  “Cold weather is what pushes the eagles down from their breeding territories in south central Canada and the north central U.S.  Traditionally, the freeze/thaw line in the middle of the U.S. is around St. Louis, which usually gives Missouri and Illinois the second largest wintering population of bald eagles in the lower 48 states.”  The flights will taper off once the warmer weather arrives and the eagles and other migratory birds fill the air and become a collision hazard.


The Aero Experience arranged to report on the recent February 4 bald eagle census flight with pilot Bob McDaniel, World Bird Sanctuary Director Jeffrey Meshach and Paige Meshach flying out of Ideal Aviation at St. Louis Downtown Airport in Cahokia, IL.  McDaniel, a veteran military and civilian pilot who had flown two bald eagle census flights prior to this one, volunteered his time, skill and beautiful Cessna 172 Skyhawk aircraft for another trip up the Mississippi River.  “I thoroughly enjoy flying the census flights,” McDaniel told The Aero Experience.  “It’s something different and I enjoy meeting the people involved.  It’s enjoyable, but also challenging to fly smoothly and precisely while maintaining the proper altitude and optimum distance from the riverbank.”  The Cessna 172 is the Ideal aircraft for the flights, since it can seat four comfortably, fly reliably and economically and have enough reserve fuel capacity for the 3-hour flight.


Eagle survey flights start early in the morning when the bald eagles are perched by the river and catching fish.  Flight planning, though, requires precise calculation of weight and balance, fuel consumption, air traffic control communication and navigation.    Briefing for the flight began around 7:20am, and they took off around 7:45am.  The census counting began over the locks in Alton, IL and proceeded on the Illinois side of the Mississippi River until reaching about 10 miles north of Quincy, IL (about 150 miles).  The census counting continued along the Missouri side of the river heading back towards Alton.   McDaniel made sure to follow the contours of the riverbanks while flying at about 700 feet and between 90-100 mph.  Maintaining proper position along the route takes constant adjustment to the heading and bank angle of the aircraft, making it a challenge for census counters new to flying to retain their breakfast at first.


Pilot Bob McDaniel is ever mindful of the challenges of flying an effective bald eagle census flight.  Maintaining situational awareness and preparing for contingencies are critical factors in planning and executing the mission.  “While there are few traffic conflicts with other aircraft, it’s important to maintain situational awareness, monitor various airport frequencies, and make appropriate traffic reports as we pass by several airports along the way,” he said.  “Because we fly over the water at the minimum legal altitude, I’m always looking for suitable emergency landing areas and thinking what the wind would do to our engine-out glide path.”  Flying the low-altitude, low-speed mission profile also has it’s unforgettably positive moments.  “Occasionally, we get to fly right alongside soaring eagles…what a beautiful sight,” McDaniel added. 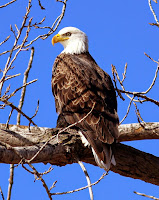 World Bird Sanctuary Director Jeffrey Meshach was very pleased with McDaniel and the flight.  “Bob is an excellent pilot,” he told The Aero Experience.  “Even after just 2 flights this census season, he's mastered the ability to keep the observers the perfect distance from the river bank.  The eagles are almost always in the trees right at the river bank because the majority of their food comes from the river.  Being able to see the river bank perfectly makes our census all the more accurate.”

Meshach mentioned that he saw 193 bald eagles last week, about one-third as many seen in past years.  One reason for the low winter counts: Asian carp.  “I am of the opinion that the Asian carp have destroyed the population of gizzard shad, which is the native fish that used to feed all of the birds over the winter,' he said.  "Unfortunately, the eagles can’t eat the carp because they go deep during cold weather - they go to the bottom of the river.”

The summer bald eagle population is showing an increase, however.  “In the summer, they eat them (Asian carp), and there are more now nesting in Missouri than there have been in many years," Meshach remarked.  "They continue to increase their numbers - their nesting numbers - in Missouri.  There were 262 nests in Missouri last year and they will probably be in the 270s this year.”

The World Bird Sanctuary has been doing census flights of bald eagles along the Mississippi River throughout the winter for over 30 years. The Sanctuary is located in Valley Park, Missouri, on the opposite side of the road from Lone Elk Park. It is open from 8 to 5 every day of the year except Thanksgiving and Christmas, with free entry and free parking. There’s something there for everyone with free seasonal shows, nature trails, educational programs and picnic pavilions. Their live displays of bald eagles, owls, hawks, falcons, vultures, parrots, reptiles and other birds and critters are popular with all ages. Visit their web site at www.worldbirdsanctuary.org for more information.

Editor's note: Portions of this article were acquired through interviews with the participants and previous year's background materials still relevant to the current year.
Posted by Carmelo Turdo at 1:06 PM