Elite Aviation hosted the February edition of their monthly speaker series on Thursday featuring the legendary Harrier pilot Colonel Jack Jackson, USMC (Ret.). Attendance was high for this presentation, with many in the audience expressing fond memories of Colonel Jackson's airshow demonstrations in the Harrier over St. Louis. But Colonel Jackson's career in aviation includes more than just being the most experienced Harrier pilot anywhere. So after getting some pizza and popcorn, the still gathering crowd settled in as he relived some great aviation adventures. 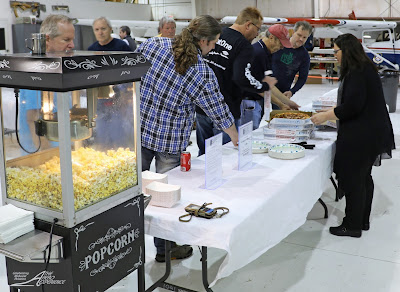 Colonel Jackson began his presentation with a humorous reflection on his college experience at Purdue University and early military flight training. He worked to pay for obtaining his engineering degree, which included fulfilling a baseball scholarship leading to semi-professional league play. He worked for a short time at General Motors, and then decided to join the United States Marine Corps after seeing a life-sized poster of a Marine in dress blues uniform. "I think I'd like to have that uniform," he remembered thinking to himself. He recalled that after giving General Motors a two-week notice of his departure, his boss told him about aviation opportunities in the USMC. After realizing he could have both the uniform and a flying career, Jackson pursued that path through flight training (an accelerated course due to ramp up for the Vietnam War). He related several other stories from his flight training days, including flying a long distance with his landing gear down and forgetting to cut full power following his first carrier landing aboard the USS Franklin Roosevelt.

He was assigned to a unit flying Cobra attack helicopters and OV-10 Broncos in Vietnam. He also flew in TA-4 Skyhawk jets to mark targets for attack aircraft. He was shot down twice while flying Cobra helicopters. He flew over 600 combat missions in Southeast Asia. 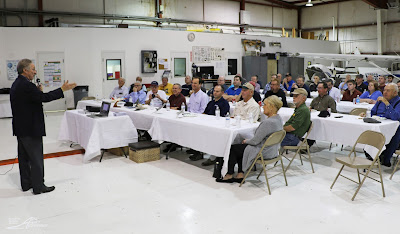 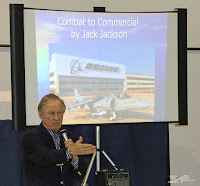 Following his combat in Vietnam, now Marine Captain Jackson went to United States Naval Test Pilot School at NAS Patuxent River, MD. The AV-8A Harrier jump jet was coming into the USMC inventory at that time, and Jackson became the 74th USMC pilot to be trained to fly it. The early model Harriers were difficult to fly. "The Marine Corps bought 107 of them," Jackson said. "We crashed 56, and killed 28 guys. It was hard to fly." Jackson went to work for McDonnell Douglas as a test pilot for 26 years following his military service, flying the upgraded AV-8B Harrier II assembled in St. Louis.

Flying the Harrier is always a challenge. While flying the second YAV-8B pre-production model, the jet's engine failed during a test flight and Jackson had to eject to save his life. Jackson told the story. "I slammed the throttle forward and the engine surged. I pulled the throttle back, and it kept surging. So the next thing I had to do was shut the engine off...I rode that thing down to 20,000 feet and I tried to start it. I tried five or six air starts. Nothing. Absolutely nothing...I rode that thing down to 2,000 feet, and I said 'It's time for me and that airplane to part company.'" Jackson ejected from the aircraft over rural Missouri, recovered from his injuries, and resumed testing the Harrier. 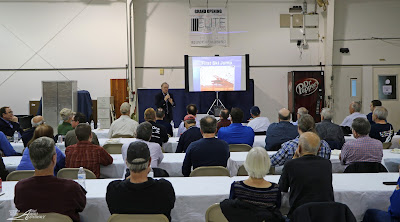 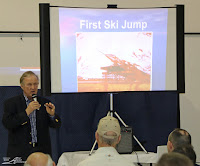 The Harrier's combat capabilities improved over time as the USMC learned to operate the new jet effectively. The Ski Jump was designed to improve the Harrier's takeoff performance from aircraft carriers. The additional energy gained from going up the ramp on takeoff increased the payload capacity of the aircraft significantly. Another unique attribute of the aircraft, the large engine intakes, had to be treated with care. The compressor stage was relatively exposed to foreign object damage and stalls caused by exhaust from missiles as they were launched from the aircraft. The aircraft is also known for its vertical takeoff and landing capability, made possible by swiveling the exhaust nozzles on each side of the engine from rearward to downward and back. The Harrier's wing is a molded carbon-fiber structure, an advanced manufacturing accomplishment in the early 1980s. Jackson's performances in the Harrier were featured in airshows in St. Louis and around the country. 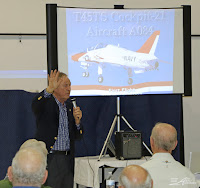 Jackson tested other McDonnell Douglas aircraft as well, including the T-45 Goshawk trainer for the US Navy and USMC. The aircraft was a derivative of the British Aerospace Hawk trainer, strengthened for landing on aircraft carriers. Jackson worked on solving some of the jet's development issues, including throttle settings for landing approach. The T-45C model continues to train naval aviators and will continue to do so into the foreseeable future.

Between his USMC aviation career and his test pilot position at McDonnell Douglas, Colonel Jackson has a wealth of knowledge about tactical jets made in St. Louis. Here are some of his comments:

F-4 Phantom II: On my first flight in the F-4, my RIO said, 'Jackson, if you get in trouble with this thing, you push those throttles as full forward as you can and pull straight back on the stick and you'll be fine.'

F-15 Eagle: I call that a gentleman's airplane. That was a magnificent machine...We made it very easy to fly.

F/A-18 Hornet: I call that our 'Star Wars' airplane...On the wing everything was moving and the heads up display and glass cockpit were telling me all this great information. 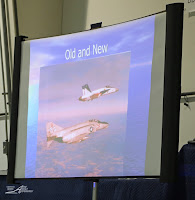 "The reason that we made these airplanes (Eagle, Hornet and later Harrier) easy to fly was that they were combat airplanes," Jackson continued. "They were built to protect this country. We made them easy to fly so that you could put the bombs on the target and get home. That was our job. And everybody who worked out there at McDonnell Douglas, now Boeing, did a fantastic job. We did that very well."

In recent years, Jackson has flown many VIPs around the nation in modern business jets. In commercial aviation, the ability to operate as a crew in a wide range of operational conditions adds a new dimension to even an experienced pilot's range of experience. The mission changed from combat to safely transporting passengers and crew from one place to another. Some things, though, carry through all situations for the pilot in command: you are still in charge of the mission. If it is not safe to go, don't go.

The Aero Experience thanks Elite Aviation and Colonel Jackson for providing an excellent February edition of the Elite Speaker Series. Elite Aviation is the general aviation flight school and piston-engine repair facility at Spirit of St. Louis Airport. Contact them through the above link for more information on how they may provide for your flight training and aircraft maintenance needs.
Posted by Carmelo Turdo at 4:11 PM