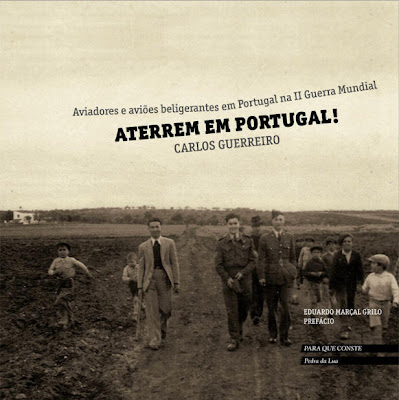 (Carlos Guerreiro Book Photo)
Mr. Carlos Guerreiro, author of Landing in Portugal, writes to The Aero Experience:
During WWII, more than 100 aircraft from belligerent countries crashed or landed in Portugal.  More than 600 men, that crewed those aircraft, had to finish their missions in a neutral territory because of mechanical failure, lack of fuel or enemy action.

All those stories can be found in a new site – in Portuguese and English - that was recently published:  www.landinportugal.org


Dozens of Commonwealth men (British, Australian, New Zealanders, Canadians etc), Americans, Germans, Austrians and even French and Belgians were interned in this neutral country during the period of 1939 to 1945.


Many others lost their lives in consequence of the event’s they were involved.


The site brings you about 140 individual files with information about the events, dates, aircraft and men involved in these incidents.  The site is based in the material collected for a book I published in 2008 named “Aterrem em Portugal!” (Land in Portugal) , where I interviewed about 15 crew members that were in Portugal during that period, besides Portuguese witnesses and others.


Documents from many archives around the world were also searched for this publication that displays more than 150 pictures in 300 pages.


In the next months I will update the information contained in the site with information and pictures. This updates will be announced in a blog were you can find also stories related with WWII and Portugal.  You can find the blog in www.landinportugal.blogspot.com


For any questions or contacts please send one e-mail to landinportugal@gmail.com
Posted by Carmelo Turdo at 9:18 AM