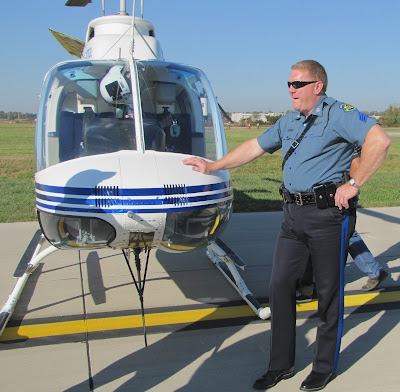 Sgt. Schuengel and his Bell 206 on display Oct. 9 at Spirit Airport (Carmelo Turdo)
Missouri Highway Patrol pilot, Sgt. Joseph Schuengel, a 17-year veteran, lost his life today in the line of duty while returning to Spirit of St. Louis Airport in Chesterfield around 11am today.  After dropping off two troopers in Jefferson County, Sgt. Schuengel reportedly encountered possible rotor separation and managed to aim the Bell 206 towards a tree-lined roadway at Horseshoe Ridge and Kehrs Mill Road.  Although no official statements on the cause of the accident were released, it appears from the early video of the accident site that Sgt. Schuengel heroically avoided nearby houses and saved many more lives on the ground.

We extend out deepest sympathies to the family of Sgt. Schuengel.
Posted by Carmelo Turdo at 3:27 PM