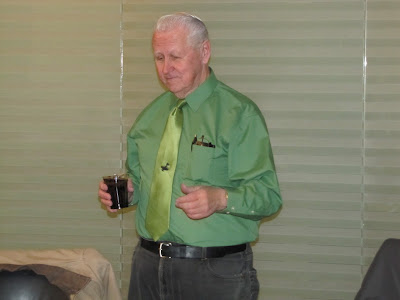 Aviation Author Tom Doll Spoke at the Recent MO AHS Meeting
Aviation historian and author Tom Doll, a member of the Missouri Aviation Historical Society, gave a presentation that included rare color photos and video of pre and post World War II naval aviation.  Doll has authored or contributed to many publications, including﻿ SBC Helldiver in Action (Aircraft No. 151), Chance Vought F-4U Corsair (Aero No. 11), USN/USMC Over Korea: U.S. Navy/Marine Corps Air Operations Over Korea 1950-53 (Aircraft Specials series 6048) to name a few.  Doll spent part of his career at the Lockheed Skunk Works, preparing aircraft surfaces for such aircraft as the F-104 Starfighter and SR-71 Blackbird.  The Missouri Aviation Historical is very fortunate to have him as a member!
Posted by Carmelo Turdo at 10:59 AM