The Aero Experience is honored to have Mr. Jack M. Abercrombie, Curator of the Greater St. Louis Air & Space Museum, as our guest author today.  Jack retired as an aeronautical engineer from McDonnell Douglas in St. Louis, having worked on aerodynamics design for the F-4 Phantom II and F-15 Eagle, among others.  He is also one of the founding members of the Greater St. Louis Air & Space Museum, which now makes its home in historic Curtiss-Wright Hangar 2 at St. Louis Downtown Airport.  Jack has been investigating the mysterious reference to the aircraft and pilot featured on the cover of City of Flight, a book that chronicles in great detail the early aeronautical history of St. Louis.  Now his research has revealed the identity of the aircraft and pilot.  Here is an excerpt from a future article that will soon appear on the museum's web site. 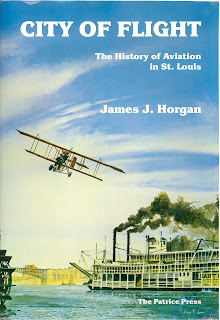 The dust jacket for James J. Horgan’s  City of Flight—The History of Aviation in St. Louis (1984), features a colorized version of an old photograph taken at the St. Louis riverfront. The photograph from which the color version was made is arguably the greatest portrayal of early St. Louis commerce and transportation ever made. In the background, the bridge (designed and built by James Eads--completed in 1874), connecting the mid-west to the eastern part of the country, represents surface travel—the lower deck for a railroad and the upper deck for pedestrians and both horse drawn and motorized vehicular highway travel. The foreground shows a steamship, “St. Louis,” representing a major segment of the trade and travel between north and south. And overhead is an early biplane heading towards the St. Louis shoreline.


Unfortunately, the smaller, black and white copy of the actual photograph within the book carries a caption identifying the aeroplane as the “Red Devil” with Tom Baldwin as pilot during the September 1910 exhibition in which Baldwin flew under the Eads Bridge. Although Baldwin did, indeed, perform the described feat (as well as flying under the nearby McKinley Bridge), the photograph and the caption do not match up.

Noted aviation historians have observed ever since the book was published that the pictured aeroplane is not the “Red Devil.” Some historians have suggested that the aeroplane configuration more nearly resembles one of the “Little Looper” airframes flown by Lincoln Beachey. But there the matter lay dormant for nearly three decades.

But recently a break-through of sorts occurred. The Greater St. Louis Air & Space Museum received a donation of a large, 20 x 24 inch, photograph identical to that shown in City of Flight.  Dr. William R. Green, MD, a professional photographer as well as former physician for McDonnell Aircraft Co., was the donor of the photograph which he acquired during the 1960s from a long closed camera shop in the St. Louis area. Dr. Green, of course, recognized the significance of the image after having observed the glass plate negative from which the enlarged print was made. 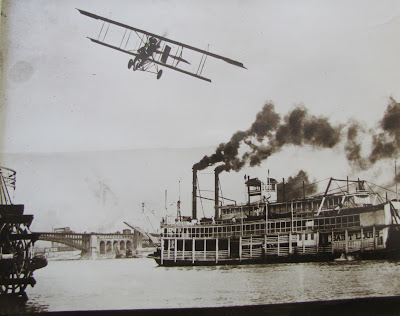 The photograph is sufficiently large to show details not heretofore available-details which lead to identification of both the time period as well as the pilot and aeroplane.

The first clue as to the date of the photograph was a sign on the side of the ship which identified the owners of the “St. Louis”—the St. Louis & Tennessee River Packet Co. Since there have been at least a half dozen steamers named “St. Louis,” this total identification was important because this specific boat was not built until 1912—two years after the “Red Devil” flew under the bridge. (The steamer sank in 1918 after being wrecked by a snag a few miles south of St. Louis).


Further research revealed that the glass plate image had been in the archives of the long-defunct (1986) St. Louis Globe-Democrat newspaper. Consequently, a search of Globe-Democrat news articles was warranted, with the focus being on Lincoln Beachey. Knowing that Beachey had toured some 126 cities between May and the end of December 1914, the search was narrowed to that time period.

Thanks to the micro-film newspaper collections of the St. Louis County (MO) Library, it was learned that Lincoln Beachey had, indeed, visited St. Louis during the 1914 tour. On 20 September, he performed at the old Maxwelton Racetrack in St. Louis County, where in addition to performing several aerial stunts, he “raced” against an automobile driven by Barney Oldfield in one of 35 or so staged events in which the team participated around the country. 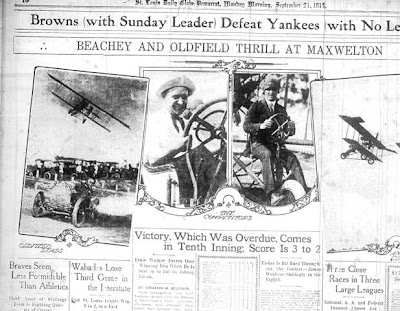 As previously mentioned, the aeroplane aerodynamic configuration is one of several that Beachey flew during his exhibition days. This particular one is that on display as the original aeroplane in the Hiller Aviation Museum in California. It is the same configuration that a week after his St. Louis visit, Beachey flew over the U.S. Capitol building and the White House on 28 September 1914 (following an intermediate show in Springfield, Illinois). 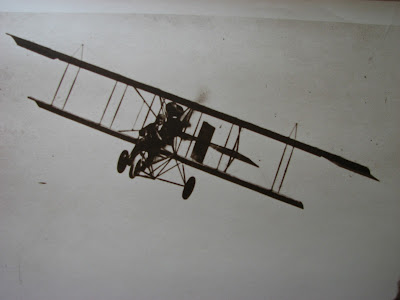 But there is more to the story—a comparison of the aeroplane in the “over-the-riverfront” image to the “Oldfield Leads” image in the next morning’s newspaper shows that the two aeroplane images are identical! There are several indications that the Globe-Democrat superimposed the aeroplane image from the over-the-riverfront photograph onto the racetrack photo for some unknown reason. You may also notice that the sun is shining from the left of the aircraft and from the right of the car.  As a result, the riverfront photographer got no credit for one of the greatest St. Louis aviation historic photographs of all time.
Research on this subject continues. At a future point, an article is planned for the “Publications” section of the Greater St. Louis Air & Space Museum web site.

Posted by Carmelo Turdo at 9:53 PM

Wow! This is a great bit of research to firm up this moment in St. Louis aviation history. Thanks to Jack Abercrombie for his scholarship in this matter.