Regretfully, we announce the passing of Rick Albrecht (January 21, 1934 - February 5, 2012) after a long illness. We express our sympathies to his wife Gen and family. Rick donated his body to science so there will not be any visitation. 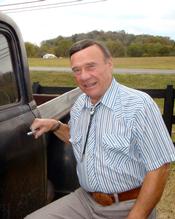 Rick was a cornerstone of the Greater St Louis Flight Instructors Association. A few of his many contributions to the association were being president for six years, he was a director for many years, he headed up the committee for the Edward A. Blue Flight Instructor Scholarship Awards and for years he was in-charge of testing at the FIRC. He was always available when asked. He worked tirelessly to promote our association and bring in new members.
Rick’s love for aviation was never ending. Most of you knew Rick and we do not have to tell you what a great flight instructor and person he was. There are many many “students” that Rick taught and flew with. For those of you that did not know Rick, he was a friend to all. We will all miss him.
Posted by Carmelo Turdo at 10:50 PM