﻿
Members of a McDonnell Douglas retiree group, informally known as the "Mac Old Team," visited the Greater St. Louis Air & Space Museum, located in historic Curtiss-Wright Hangar 2 at St. Louis Downtown Airport, this week following their last monthly luncheon meeting of the year.  The group has made several visits to the museum in recent years, and individual members have donated significant pieces of aerospace memorabilia that now reside in the museum galleries.  Joining the group this year were several students and their Director from the Vincennes University  Center for Technology, Innovation & Manufacturing and leaders of the Purdue Alumni Club of Jasper, Indiana.  Also present was a group of high school students representing "Learning Experiences in Applied Fields," a peer-to-peer mentoring group that currently assists students in areas of technology studies.  The connection to the Indiana education institutions is an outgrowth of a visit by some McDonnell Douglas retirees to the Virgil I. Gus Grissom Memorial Museum in Mitchell, Indiana for the 50th anniversary of Grissom's (McDonnell Aircraft Company-designed) Mercury spacecraft flight in 2011.  Since then, visitor exchanges have occurred to solidify the new relationship between the McDonnell Douglas retirees, museums and education institutions in the respective states.
During the visit to the museum, retiree group member Carl Scheske presented a collection of Space Shuttle memorabilia, including mission patches, posters and prints donated by fellow retiree John Schuessler.  The items, accepted by museum Curator Mike Burke and museum President Mark Nankivil, will become part of a future exhibit.

﻿ Following the presentation, members of the McDonnell Douglas retiree group and the visitors from Indiana toured the museum, some for the first time.  The students in the group were drawn to the life-size, interactive exhibits such as the restored F-4 Phantom II jet fighter cockpit, "Spirit of St. Louis" cockpit reproduction, aircraft in the hangar and the functioning Link Trainers.  Other gallery exhibits, such as the jet engine cut-away working model and the pilot flight gear display, sparked conversations between the retired engineers and the students about the development of jet propulsion and the corresponding issues concerning flight crew physiological health with jet and rocket flight.  The real success of the visit was seeing the interaction between the pioneers of the jet and space age and the very bright, new generation of students starting to make their mark on the future of the nation's aerospace industry. 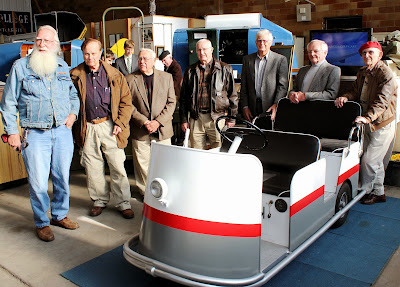 Some of the McDonnell Douglas retirees were present in the plant in 1962 when James S. McDonnell, Chairman and CEO of McDonnell Aircraft Corporation, drove President John F. Kennedy in the factory cart now on display at the museum.  Those in attendance posed near the cart, from L-R: Nelson Weber, Carl Scheske, Earl Robb, Wade Wilkerson, Dean Purdy, Tim Tinsley, and Donald Alwine.


Special thanks to Norm Beckel and the "Mac Old Team" for arranging the luncheon and visit to the museum with our visitors from Indiana.  Also thanks to museum Curator Emeritus Jack Abercrombie for coordinating the visit to the museum.
Posted by Carmelo Turdo at 12:18 PM