St. Louis Downtown Airport was pleased to host the arrival of the pink Cessna Conquest that occasionally visits the St. Louis area.  Flown by Ron Buchanan for Three Lakes Enterprises out of New London, Minnesota, the aircraft flies corporate clients throughout the region.  The aircraft retains it's pink hue and hot pink stripes in honor its previous owner, World War II Women Air Force Service Pilot (WASP) Suzanne Parish (1922-2010).  The base color is actually called ANA 616 "Sand," similar to the FS30279 pictured here.     Parish reportedly favored that color for her post-war aircraft after seeing the "Sand" paint on the North African P-40 fade into a shade of pink under the intense desert sun.  Not surprisingly, her P-40N Warhawk, now displayed at the Kalamazoo Air Zoo Main Campus, is also pink!


﻿﻿﻿﻿﻿﻿﻿﻿﻿﻿﻿﻿﻿﻿Suzanne Upjohn DeLano granddaughter of W.E. Upjohn, took up flying as a distraction from an ankle injury sustained from a horse riding accident in 1941 at her home near Kalamazoo, Michigan.  She continued her training in a more favorable climate near a family home in Phoenix, Arizona, and joined the Women Air Force Service Pilots (WASP) in the class 44-W-6.  She went on to test fly U.S. Army Air Force AT-6 Texans after they underwent maintenance or modifications in Bryan, Texas.  The WASP mascot, "Finfinella," created by Walt Disney Studios in the likeness of a female gremlin taken from the Roald Dahl book Gremlins, symbolized the WASPs' ability to fly safely despite the many mechanical "gremlins" that seemed to haunt combat aircraft of the period.  It remains on the aircraft as a reminder of the valuable service WASP pilots gave to their country, some paying the ultimate price.

Following the war, Suzanne DeLano married Preston "Pete" Parish, and as they started their family, they also started another family - a collection of aircraft.  One, as mentioned above, is the P-40N now on display at the Kalamazoo Air Zoo, and another is the 1984 Cessna 425 Conquest recently seen in St. Louis.  Along with the unique exterior paint scheme, the aircraft sports a pink interior and PT-6 turboprop engines with the Blackhawk conversion kit from Kal-Aero, doubling the available shaft horsepower.  The aircraft was leased to Western Michigan University's College of Aviation in 2004, an agreement which included about a year's restoration work by the university's students.  It was later acquired by current owner, Three Lakes Enterprises in 2012.  The aircraft continues to honor the legacy of Suzanne parish and the WASPs as "The Pink Plane" attracts an audience wherever it lands.

Here are some view of the Conquest as it remained on the Ideal Aviation ramp one day this week: 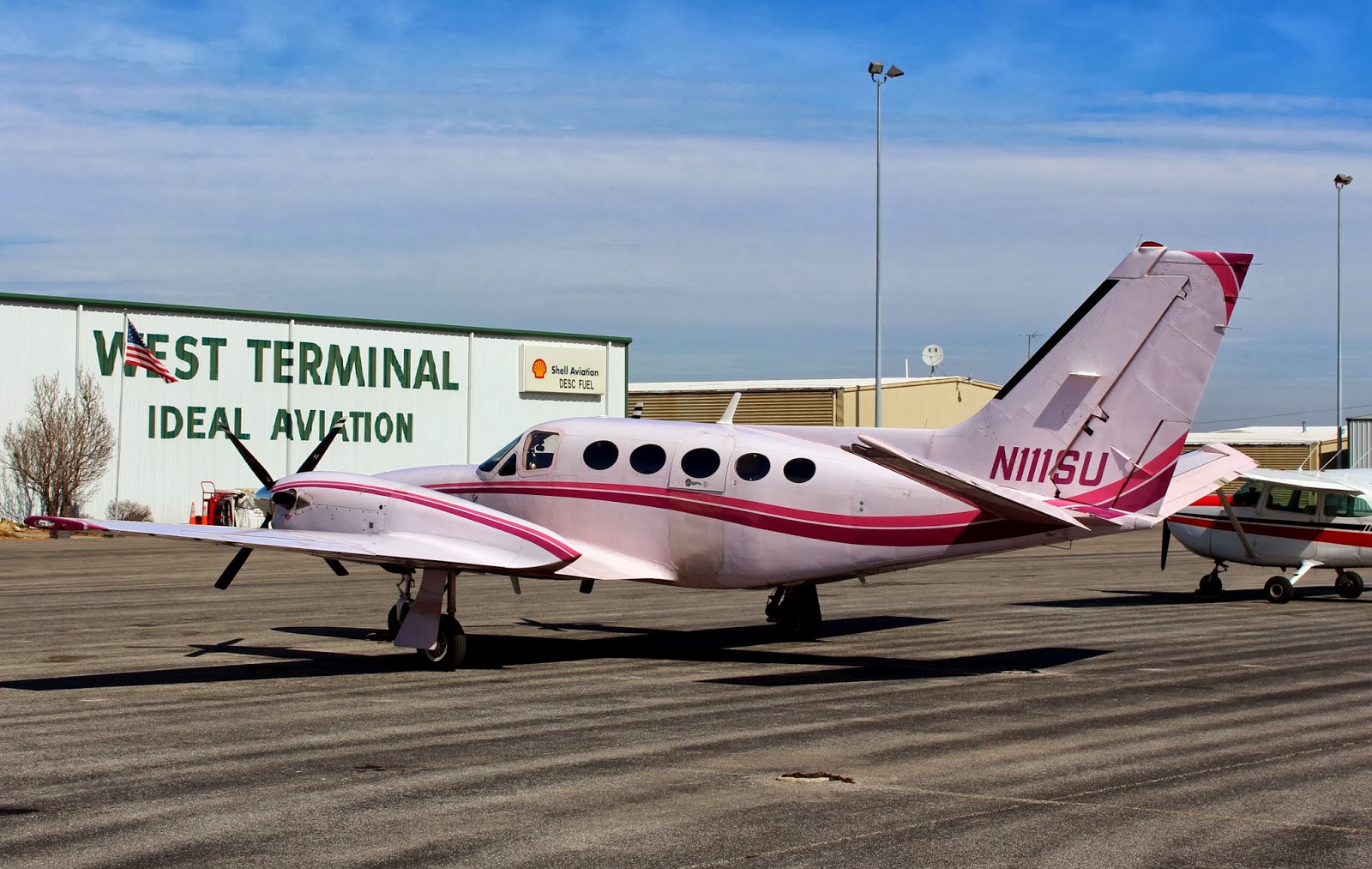 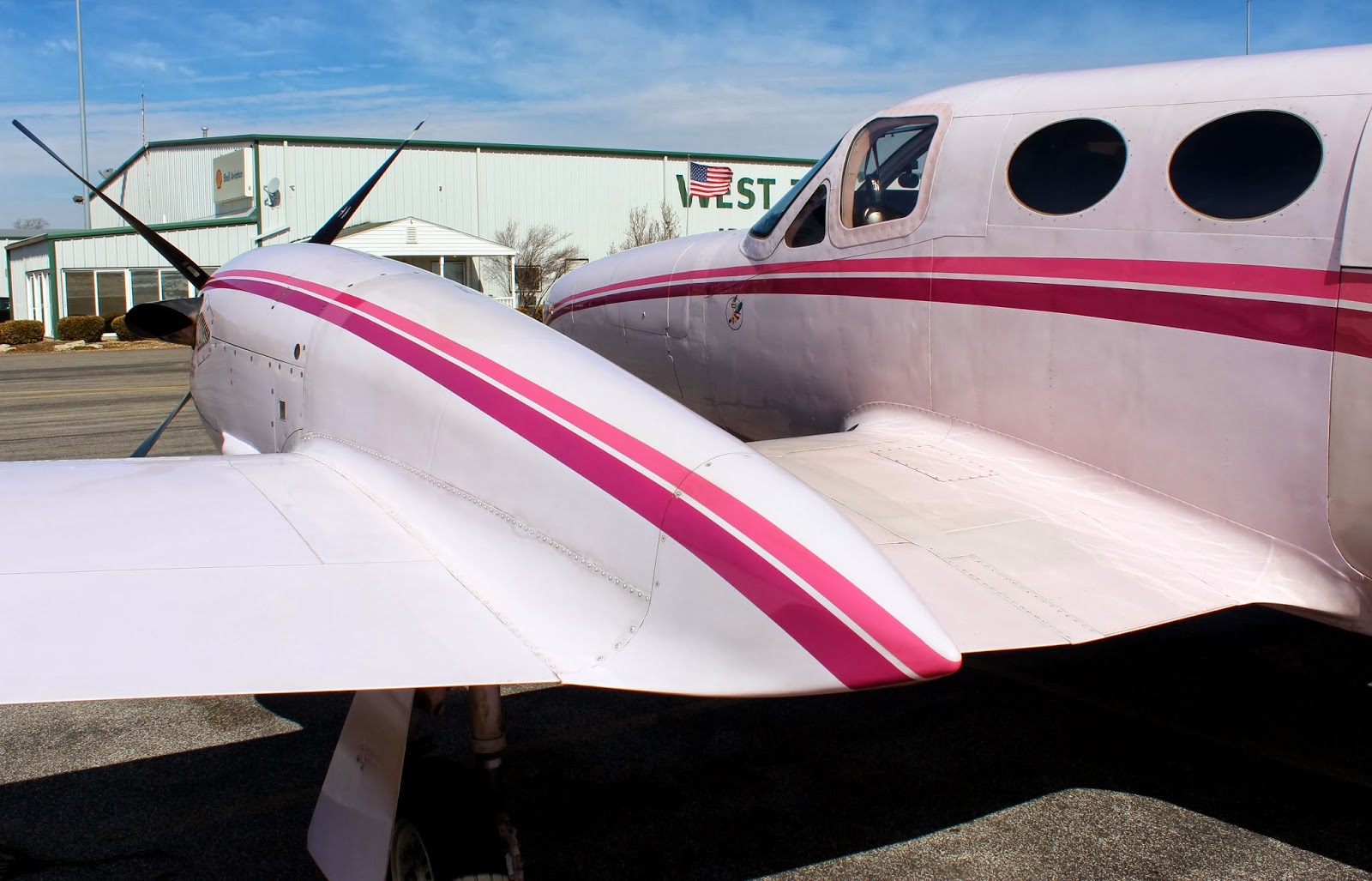 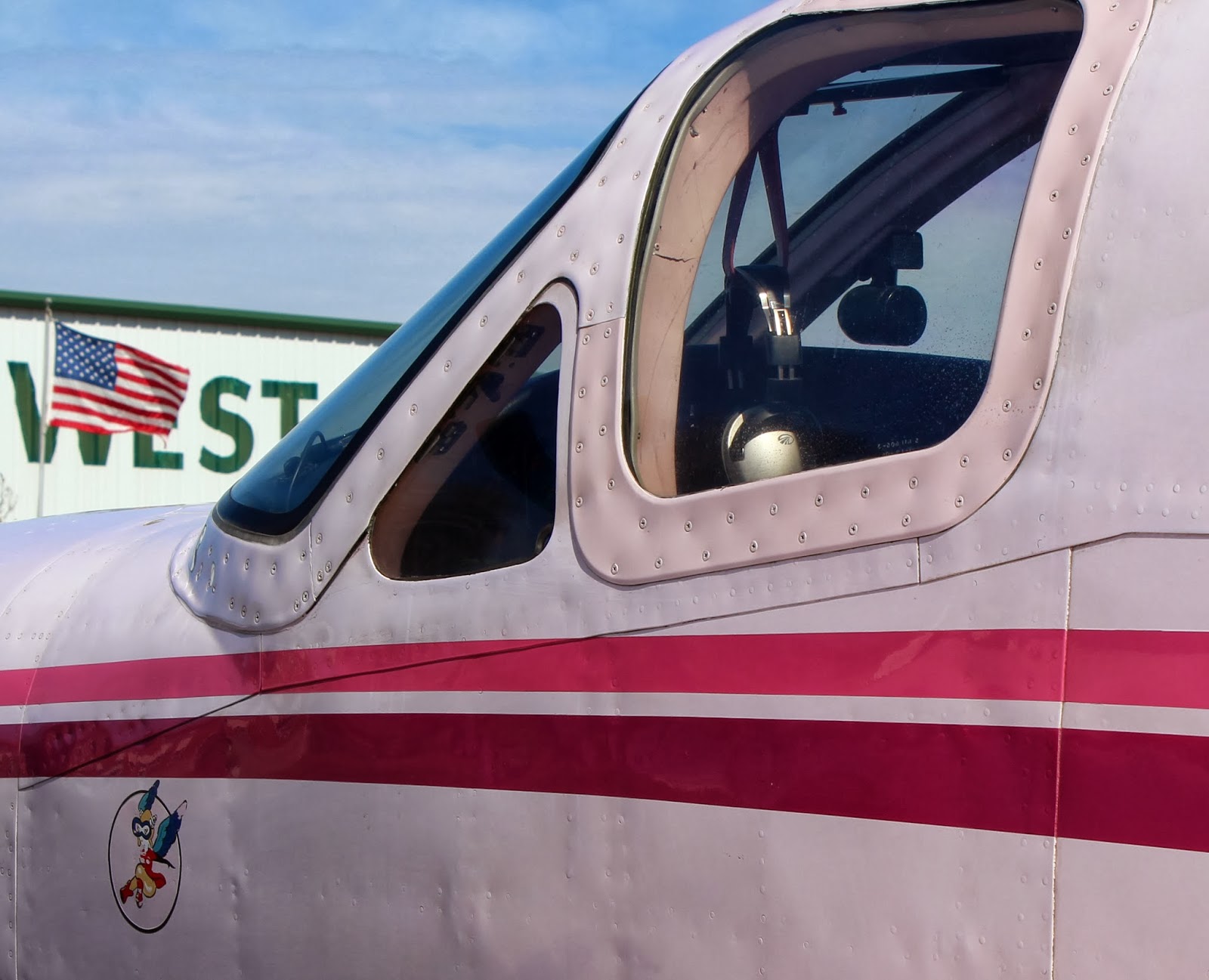 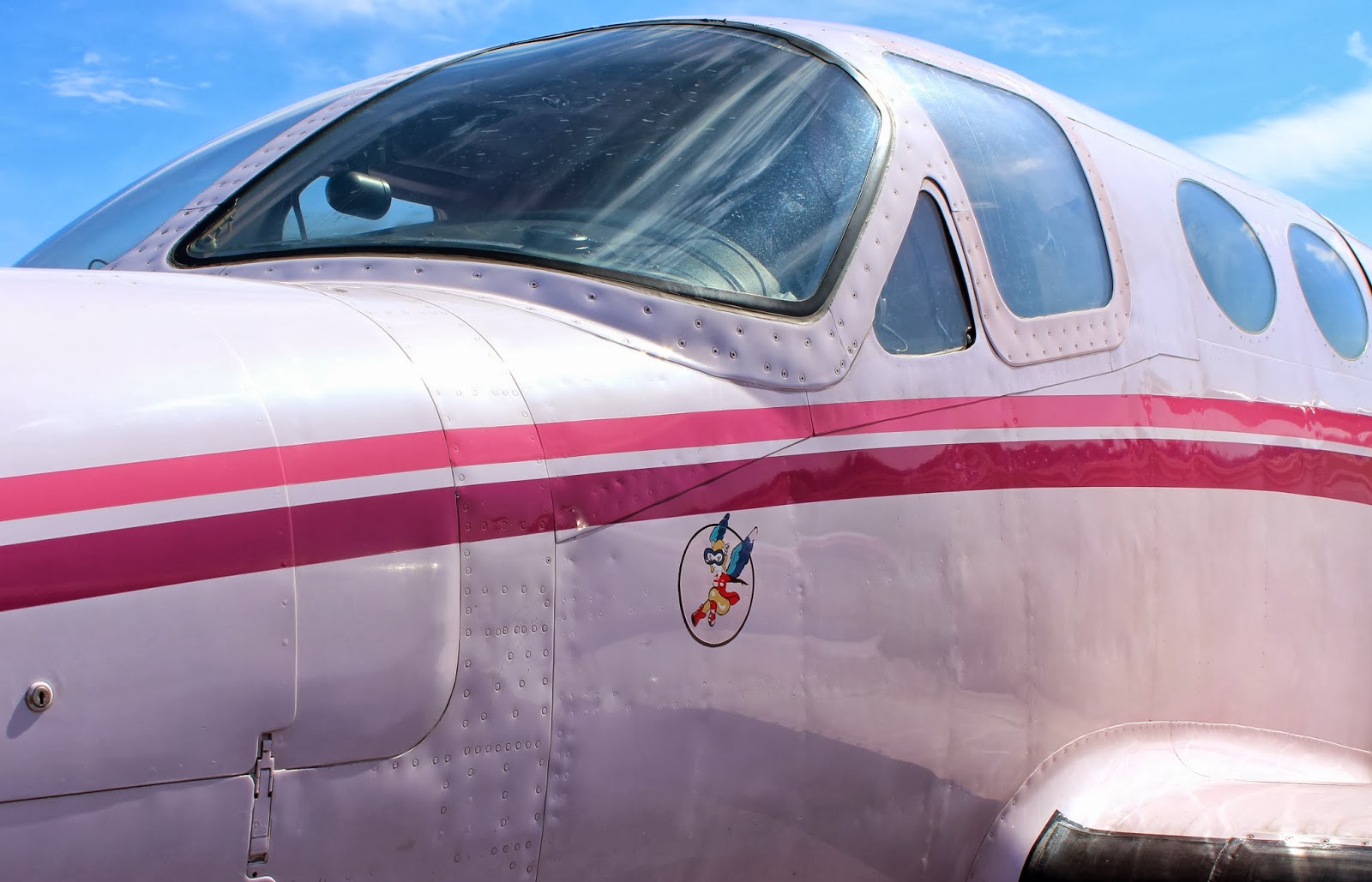 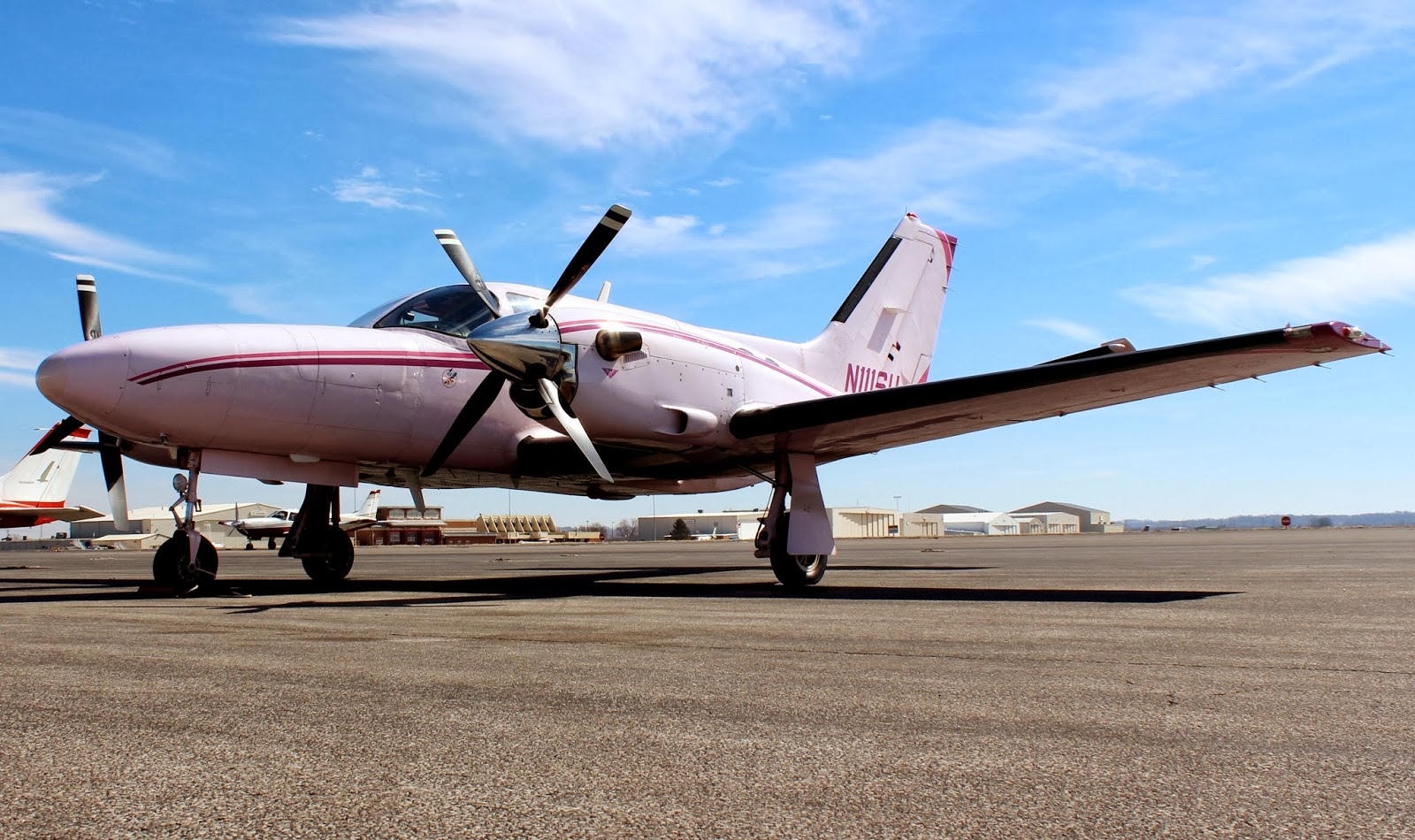 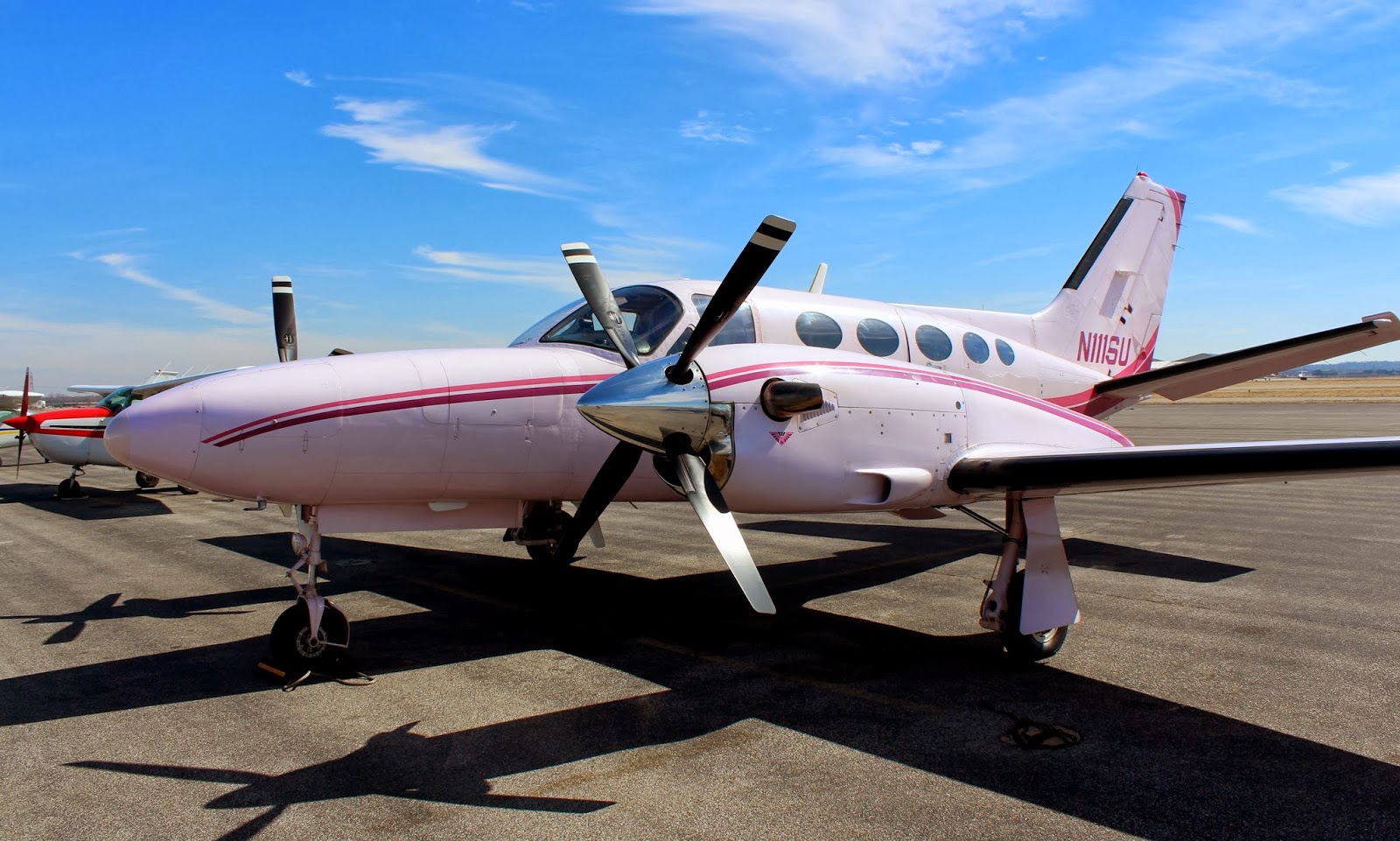