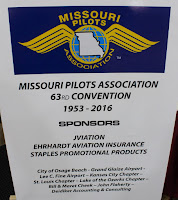 The 2016 Missouri Pilots Association (MPA) Convention was held Saturday at a new central location, the Inn at Grand Glaize in Osage Beach at the Lake of the Ozarks.  The annual event is a way for MPA members in chapters from across the state to renew friendships, review the issues of the current general aviation industry and learn ways to improve the skills of each pilot.  There were a variety of topics covered by specialists in their fields, including an FAA presentation and demonstration of spatial disorientation, a physiological look at how exercise improves health, and an update from the Missouri Department of Transportation.   Following dinner, members enjoyed the traditional state and chapter awards presentations and a keynote address by Aircraft Owners and Pilots Association (AOPA) Central Southwest Regional Manager Yasmina Platt.  Over 100 members were in attendance, an increase over that of previous years.

The MPA 2016 Convention began with the presentation of the colors by the Miller County VFW Post 2442 color guard, the Pledge of Allegiance and the singing of the National Anthem by Ms Reagan Taylor. 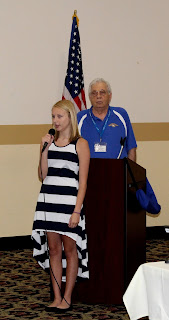 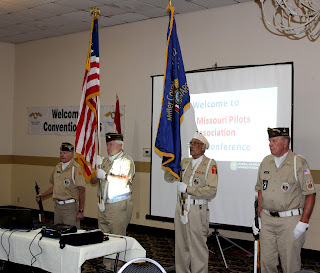 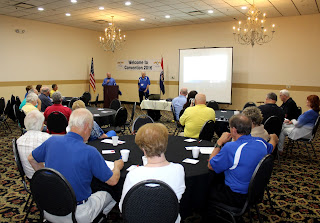 The newly-elected Mayor of Osage Beach, MO, The Honorable John Olivarri, welcomed the convention to Osage Beach.  As an Alderman for the previous nine years, he has met some of the members during their "hangar dinners" at the nearby airports and is familiar with the needs of the aviation community as well as the very important tourism industry that permeates the area.  He also thanked those who took the optional Celebration Cruise on Friday evening.
﻿
A favorite and very valuable part of this and other MPA events is the practical discussion about aviation safety by the Federal Aviation Administration's Safety Team (FAASTeam).  St. Louis FAASTeam St. Louis Program Manager Phil Dixon led an excellent session on the topic of spatial disorientation, a contributing factor to many fatal aircraft accidents occurring in instrument flight conditions.   His opening slide set the tone for the importance of recognizing and avoiding spatial disorientation, often encountered during flight into cloudy/storm conditions and at night.  It read: "The average person involved in a fatal spatial disorientation accident is a 30 year old male with ten years and 1500 hours of flying experience."  Dixon initially left the number of hours blank and asked the members present to guess the hour figure, and most of the responses were figures less than the 1500 hours quoted.  The point of the exercise, of course, was to emphasize that even pilots with 1500 hours of flight time are susceptible to spatial disorientation.      ﻿ 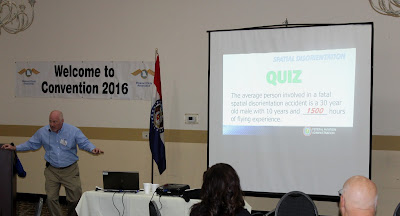 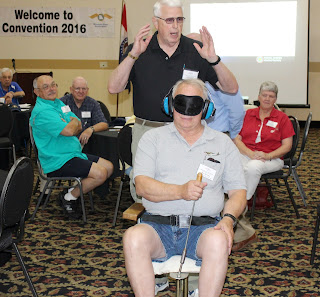 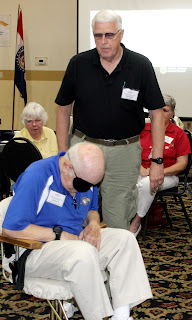 Former FAA FAASTeam Program Manager Fred Harms assisted with demonstration of spatial disorientation using the Barany Chair.  The Barany Chair, named for 1914 Nobel Prize-winning Austro-Hungarian Otologist Robert Barany, is a device used for demonstrating the effects of spinning motion on the test subject's vestibular system that regulates one's sense of balance.  The subject is blindfolded to remove visual references that would otherwise cause severe motion sickness.  He is spun around and asked to indicate (here by using a "control stick" as if flying an aircraft) which direction he believes he is spinning.  As the chair begins to spin, he correctly identifies the direction.  Once the chair is slowly brought to a stop, he begins to move the stick to the center and then to the other direction even though he is not moving at all.  A pilot not skilled in using instrument flight techniques and has lost visual reference to the ground in a cloud may begin a turn to the right, sense he turning left, and overcorrect again to the right.  This would result in a spiral down to a fatal crash fatal.  When encountering instrument flight conditions beyond the pilot's skill level, it is advisable to maintain course and request assistance from air traffic control rather than attempt to take evasive action to find a way out on one's own. 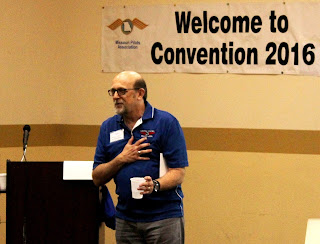 Continuing with the physiological theme, Dr. Pierre Moeser, who practices with the BJC Medical Group in St. Peters, MO gave an informative presentation on the effects of regular exercise in the prevention and control of chronic health conditions.  His advice: 30 minutes of walking per day will have positive effects on keeping physically fit, reducing blood pressure and preventing heart attacks, strokes and the onset of Alzheimer's Disease for most people.  Pilots who regularly exercise may find that they think more clearly, better endure the rigors of flying high-performance aircraft and tire less frequently during routine flying (not to mention a tradeoff for better performance from your aircraft).     ﻿
﻿ 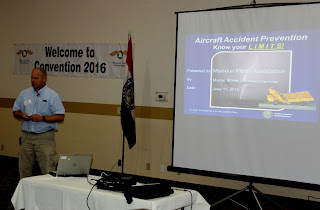 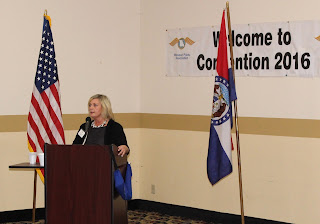 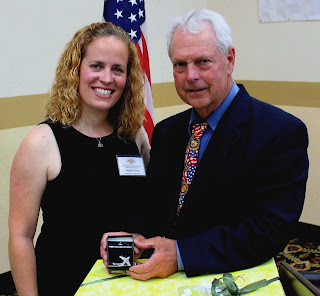 The evening's Keynote speaker, Aircraft Owners and Pilots Association (AOPA) Central Southwest Regional Manager Yasmina Platt, was again welcomed to the MPA Convention with great enthusiasm.  She brings a new spirit of encouragement in support of general aviation.  Platt presented the various property tax categories available in Missouri for general aviation aircraft, and led a discussion on how to approach the state to declare an aircraft for the coming year.  On the more positive side, she introduced some of her ideas on how to invigorate the general aviation community, including state flying activities such as her "Ozarks Air Trail."  This route description includes not only great airport communities to visit, but other travel information such as dining, camping, boating, museums and other places of interest that add value to each destination.  The flying trail concept gives pilots a new way to sharpen their navigation skills while providing greater economic impact to the communities served by the destination airports.  This in turn gains more support for airport development in those communities.
A series of awards were presented by the MPA Board and by the chapters in attendance.  Included among them were:

More coverage of the MPA Convention awards will follow soon!
The Aero Experience thanks the Missouri Pilots Association for the opportunity to work on great feature stories throughout the last few years, and for holding a great convention.  We are honored to be chosen for the 2016 Media Award.
Posted by Carmelo Turdo at 11:21 PM