The Midwest experienced an unusually warm first weekend in December, and for many in the aviation community that meant getting some last warm-weather flying time logged before winter weather finally arrives. On Saturday morning, The Aero Experience was visiting the Greater St. Louis Air & Space Museum at St. Louis Downtown Airport when we were introduced to St. Louis-area World War II U.S. Navy veteran aviator, John Foy, who was preparing to fly in a small aircraft for the first time since landing on an aircraft carrier during his service days. We caught up with Mr. Foy as he was seated in a Cessna 182 with pilot Bob Miller. Foy, now 97 years old, reached the aircraft with the aid of his walker and was ready for the mid-morning flight around the Gateway City. A quick wit, he looked to Bob Miller and said, "I always ask how many hours the pilot has." Miller's answer, about 3,000 hours, seemed satisfactory and so they closed the doors and prepared for takeoff. Foy, whose eyesight is severely limited, also asked Miller to take him to the end of the runway so he could act as LSO (Landing Signal Officer who guides in aircraft to the carrier) and grade his landings. 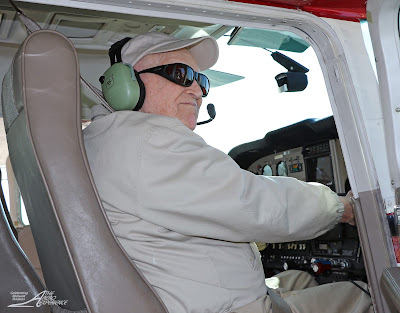 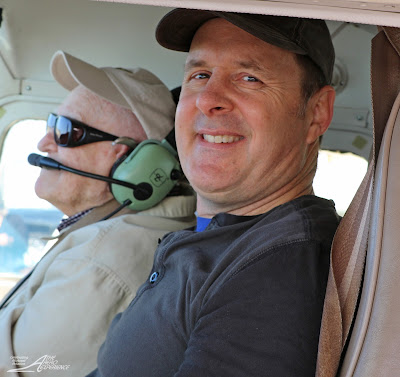 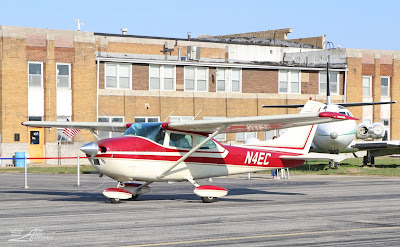 Bob Miller met John Foy through his wife, a Doctor of Physical Therapy, and they quickly became friends. Over time, he researched John Foy's World War II U.S. Navy wartime experience. Foy was in VF-80 (Fighting Squadron 80), named "Vorse's Vipers" after their commanding officer, Lt. Cmdr. Albert O. Vorse, Jr.  The unit began combat operations in November of 1944, and initially flew 36 Grumman F-6F Hellcats off the USS Ticonderoga in attacks against the Japanese Empire. The squadron was transferred to the USS Hancock after their carrier was hit and damaged by a kamikaze attack in January, 1945. VF-80 supported operations in the Philippines and the invasion of Iwo Jima before being relieved in March of 1945. The squadron was credited with 159.5 aircraft destroyed and another 60 probably destroyed or damaged. Foy also flew Vought F-4U Corsairs until the war's end. One of his squadron-mates, Richard "Zeke" Cormier, led the U.S. Navy Blue Angels Flight Demonstration Squadron in the early 1950s during its reactivation following the Korean War.
"I flew the F-6F most of my time in combat, and we switched to the corsair when we were doing strikes over Tokyo near the end of the war," Foy said. "We were hit by two kamikazes, and the Ticonderoga went home for repairs." Foy jokingly credits tapioca pudding for saving his life, since he was in the ward room enjoying a post-flight snack rather than on the flight deck when the kamikazes struck the aircraft carrier. He liked flying the Hellcat better for its more straightforward flying qualities, noting that the Corsair was trickier to fly due to its unforgiving spin characteristics. "It (the Corsair) had a placard that said, 'Do not spin this aircraft more than one-quarter turn.' I never tried!"
Following the war, Mr. Foy worked as a detective for the New York City Police Department and later for the U.S. Treasury office in St. Louis. He was married to his wife, Agnes, for 62 years and raised eight children. Today's flight was especially meaningful considering the many years since his last one. "The last time I flew was when I landed on the deck of the Hancock," he said. Saturday he had another flight in the front seat, over 70 years later. 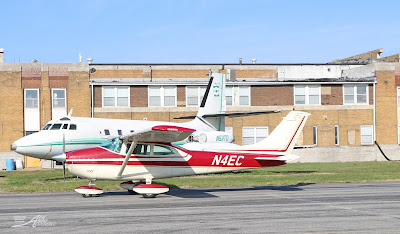 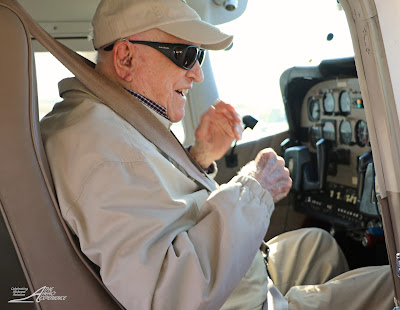 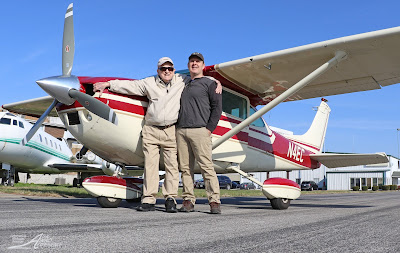 From his reaction after landing, it was clear that John Foy, World War II U.S. Navy Hellcat fighter pilot, enjoyed being in the air again. Always in good cheer, he reported, "The pilot was a little unsure, so I had to straighten him out!"

The Aero Experience thanks Bob Miller for introducing us this hero of the Greatest Generation, and to Mr. John Foy for his service to our nation and our community.
Posted by Carmelo Turdo at 5:52 PM