St. Louis Center Manager Alex Thurmond introduced the awardees. "Bill and Dale will make our twenty-sixth and twenty-seventh recipients of this award," he told the employees and family members gathered for the ceremony. "They do a fantastic job, they get fabulous reviews from our customers and our clients, they're great teammates. People who work with them really enjoy being around them and having them here as part of our team." Following the introduction, both Dale Grove and William Short gave presentations covering their military and civilian aviation careers. 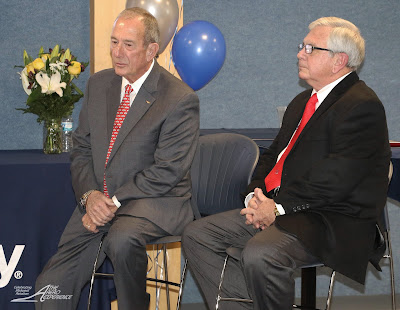 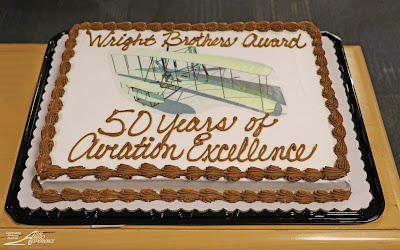 Dale Grove began his presentation with a look at his first solo flight photo from the U.S. Navy, taken at NAS Pensacola, FL on May 13, 1969. He carrier qualified in the T-28, and in 1971 he began his service in Vietnam flying the OV-10 Bronco in VAL-4 "Black Ponies" Composite Squadron. He was stationed at Subic Bay, Philippines in 1972 and Bandar-Abbas, Iran in 1973. His Naval Aviation career led him around the world, though it was not his original career choice. The Vietnam-era draft was looming for Grove, who was working as an engineer, and joining the U.S. Navy as an officer seemed the better option.

Following military service, Dale Grove flew briefly for United Airlines, then for Southwestern Bell Telephone (now ATT) in St. Louis and several other companies before joining FlightSafety International. "I have continually flown for all fifty years," he noted. "I have always been current in something."  Pointing to a slide showing his family, he closed with, "This is what it's all about." 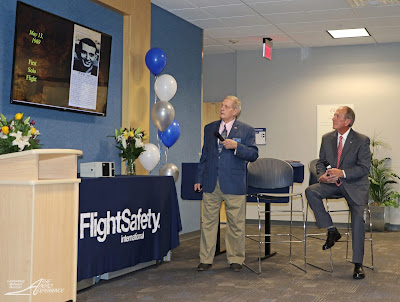 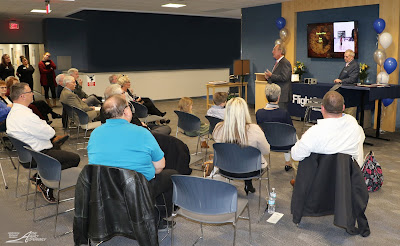 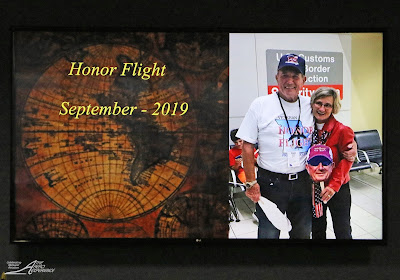 William Short then gave a summary of his aviation career, also beginning with military service. His career choice was influenced by his father's service in the U.S. Army Air Forces as a B-24 Liberator bomber pilot in the European Theater. He soloed on October 24, 1969 in Carbondale, IL at age 17 and received several pilot ratings and A&P training at SIU Carbondale. William Short served in the U.S. Air Force from 1971 until his retirement in 2000, instructing pilots in the T-37 and later flying the C-9A Nightingale aeromedical transport in support of military deployments and Presidential missions. He commanded the 459th Airlift Squadron at March AFB, CA and served as Chief of Staff, Air Mobility Command.

After retiring from the U.S. Air Force, William Short flew corporate jets for FedEx and later joined FlightSafety International. "I am very proud to be here," he told his colleagues, family members and guests at the awards ceremony. "It's been a blessing...I had two careers in aviation, and I wanted to close down with a third. This is where I will close my aviation career." 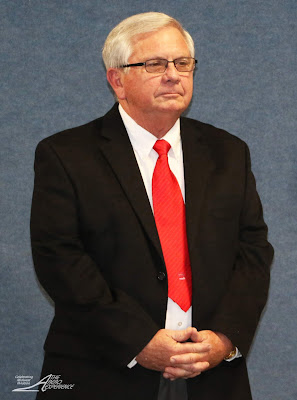 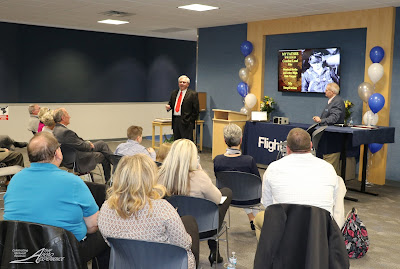 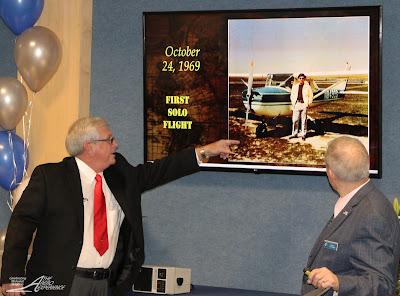 Following the aviation career presentations, the Wright Brothers Awards were given to Dale Grove and William Short. The award package includes the certificate, a plaque and a copy of each pilot's FAA files. Commemorative pins were offered to the awardees and their wives, recognizing the support given by family members over those fifty years. Following the awards ceremony, FlightSafety International provided a dinner buffet and cake for all in attendance. 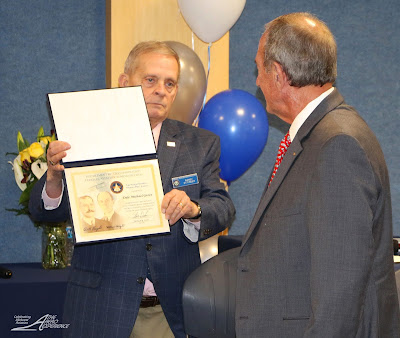 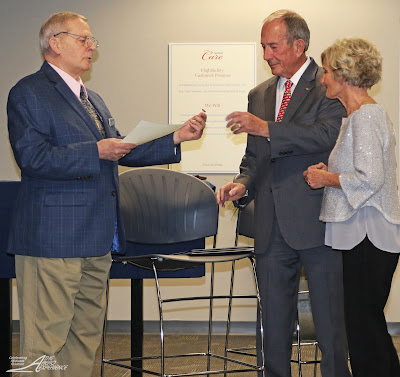 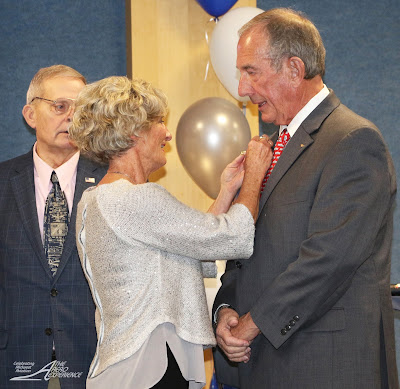 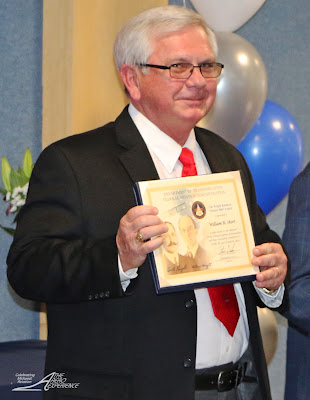 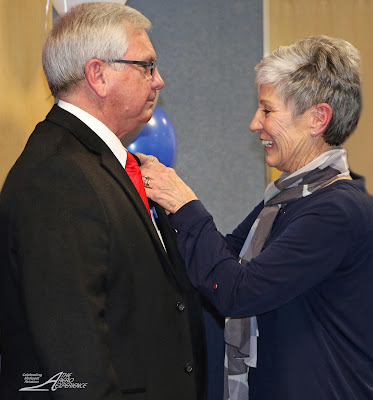 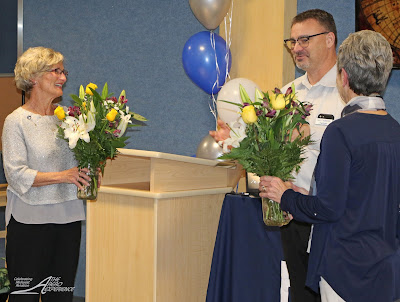 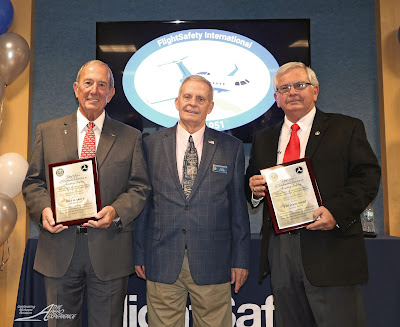 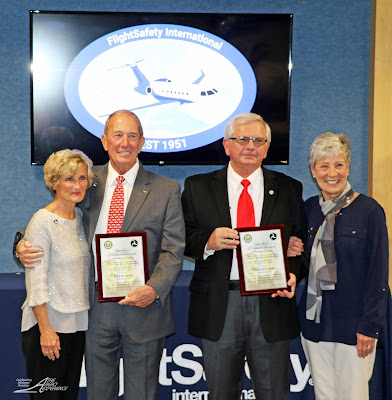 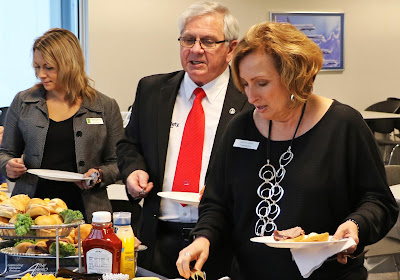 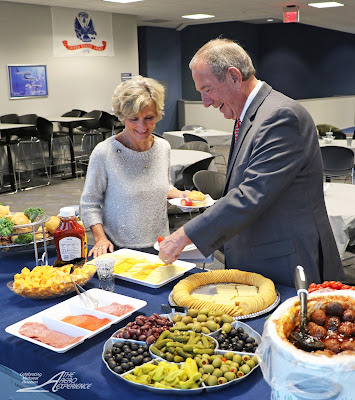 The Aero Experience thanks FlightSafety International St. Louis Center for recognizing the career accomplishments of their employees. We also thank the FAA St. Louis Office for presenting the awards and preparing the presentations used in the ceremony. For award application information, please see the FAA's Wright Brothers Master Pilot Award dedicated web page.
Posted by Carmelo Turdo at 3:18 PM