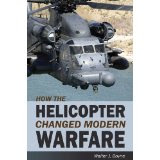 (Amazon.com Image)
"Walter Boyne has made what could be a prosaic subject read like one of his thrillers. It never slows and is packed with an immense amount of information and sometimes alarming, but illuminating, insights.
This guy is good!" -Budd Davisson, editor in chief, Flight Journal magazine.
"Anyone interested in helicopters or flying generally will find this book indispensable." -Philip Handleman, Handleman Filmworks.
"In yet another home run, Walter Boyne sets forth and definitively explains the transformational importance the helicopter has gained on American battlefields from Korea to Iraq and Afghanistan. This is an insightful and thought-provoking book." -Eric Hammel, author, The Road to Big Week.
The vertical lift aircraft was a unique invention when introduced to combat during World War II. Since then, it has changed the way we perform transport, soldier extraction, and close air support. Carefully cataloging the steps from idealistic concept to fantastic killing machine, this historical overview touches on the major points of the helicopter's developmental journey. The helicopter has proven advantageous in overcoming problematic geography and terrain and has empowered the United States military in ways previously unimaginable. Unfortunately a combination of factors, including arguments over the machine's role in the military, operating costs, maintenance, and the increased attention toward nuclear weapons, has stalled its progress. Blaming Congress and the Department of Defense for this irresponsible oversight, this account simultaneously pays tribute to all those who made the technological advancements possible.
Walter J. Boyne co-founded the cable channel Wingspan, the Air and Space Channel, which was bought out by the Discovery Channel in 1998. Since then he has appeared as a commentator, discussing aviation, space, and military events on broadcast networks and on such cable channels as the History Channel, A&E, the Discovery Channel, and the Military Channel. Boyne, a retired air force colonel, was inducted into the National Aviation Hall of Fame in 2007 and was awarded the Lifetime Achievement Medal by the Air Force Association in 2010. He is the author of more than fifty fiction and nonfiction books on his subject of expertise, including The Influence of Air Power upon History, available from Pelican. He resides in Silver Spring, Maryland, with his wife, Terri. ﻿
Posted by Carmelo Turdo at 9:16 AM