With sequestration taking place, many airshows throughout the country have cancelled their events, and the list keeps growing. At The Aero Experience, we strive to provide top quality aviation-related stories, events and media material complete with pictures and sometimes video. We try to keep everything as positive as we can because aviation is great, and I'd even reach out and say it is a magical thing. It's the closest we can get to heaven and the stars while still enjoying life - and what can be negative about that?

This leads me to ask this question, "Why are cities cancelling their airshows?" Now, I know the obvious reason, the removal of military jet teams, which really draw in crowds and in turn generates revenue. Here's the problem I have with that: after attending innumerable airshows, it has NOT been my experience that people will sit in the sun for hours JUST to see a military jet team. There are so many great individual aerobatic pilots on the circuit, along with many civilian formation aerobatic teams, to draw an audience.  Also, let's not forget the predecessors to the military planes of today, the warbirds of years past. Sean D. Tucker, Julie Clark, Skip Stewart, John Mohr, Kyle Franklin, Matt Younkin, Patty Wagstaff, Aeroshell Aerobatic Team, Lima Lima Aerobatic Team, Team Aerodynamix, B-29, B-24, B-17's, P-51's, F-4U's, P-40's, B-25's, P-38's, T-6's, SNJ's, TBM's, Skyraiders, T-34's, Stearmans, WACOs.  These are just some of the performers and aircraft that come to my mind when thinking about airshows, there are many more. Yet, a lot of people will miss out on seeing these unbelievable performers/artists just because the military has grounded the Thunderbirds, Blue Angels and some of the tactical fighter teams. 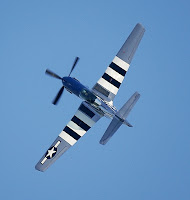 I enjoy the modern aircraft immensely, the noise, the power, the speed.  But were there not airshows before the jet age arrived?  Millions of people have headed out to Reno for years to see different aircraft race and perform, and will continue to go whether there is a military jet demonstration team there or not.  A good example of this was yesterday at the St. Louis Science Center where we attended a showing of the Air Racers movie. The theater was filled and it was the second weekend they were showing it.  The audience was not there to see a military jet demonstration team, they were there to enjoy the magic that is aviation. My advice to those organizers of airshows nationwide: Promote your shows as throwbacks to the glory days of aviation, where barnstorming and tales of the aces of WWII captivated audiences and taught people the history of how aviation evolved to what it is today. Bring people into the world of aviation, rather than cancelling shows that may captivate and consume a boy or a girl like it did me many years ago.
Posted by Carmelo Turdo at 9:02 PM

You are right, however we have transformed from the "Good Old Days" of aviation into shows that built thier entire business plan on getting "Free" stuff. Well, Business 101 - there is no such thing as free and and plan based on a sole source is doomed to failure. We need to get back to charging a fair price at the gate and paying a fair wage to the acts that make up the show. There are civilian jet acts out there - but they are not "Free". We as an industry will survive - some of the individual shows and acts will not - and maybe that's not a bad thing as those who make it through this will be stronger for it.

Thank you for your comment Drew. I agree whole heartedly, while living in Cleveland every show I went to charged admission somewhere in the area between $10-$20 and I never minded paying it. When I go to a show I get there when the gates open and usually don't leave until I'm kicked out, that's about eight hours of thorough entertainment for between $10-$20 dollars. How can you beat that? The only suggestion I would make to organizers would be to either charge admission and keep food prices down or allow outside food in so that you don't break a large family who already might have spent $40-$60 (depending on prices for and number of children,) coming through the gates. Leo