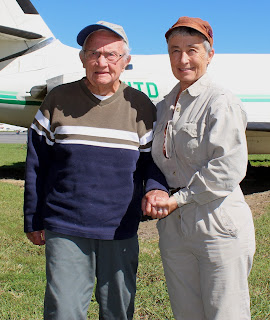 The Midwest Aviation community mourns the passing of aviation icon Carl "Chub" Wheeler yesterday morning at the age of 103.  Chub began his flying career at Curtiss-Steinberg Airport, now St. Louis Downtown Airport, and received his pilot's license in 1935. He became an instructor before and during World War II, airport manager and corporate pilot. He was a Life Member of the Greater St. Louis Air & Space Museum that resides in historic 1929 Curtiss-Wright Hangar 2 at the airport, and 2014 inductee into the IL Aviation Hall of Fame.  Our condolences go out to his family and our aviation family as well.

We were fortunate to visit with Chub and his daughter Mary Kay just last Sunday at the museum.
Posted by Carmelo Turdo at 3:55 PM