On Tuesday, May 10, the three Canadian Forces demo teams provided a once in a lifetime opportunity to capture the image of an event that has not occurred in the United States until this day, and may never happen again.  The  2016 Cape Girardeau Regional Air Festival was the setting for this very unique opportunity - all three Canadian Forces demonstration teams performed at this mid-week air show at the Cape Girardeau Regional Airport.
The Aero Experience was given the opportunity to take a group photo of the Canadian Forces Snowbirds, CF-18 Demonstration Team and the Skyhawks Parachute Team.  Many people went the extra mile to make this photograph possible, and we are very grateful for their efforts to bring the teams together upon their arrival.  All three demonstration teams were willing to accommodate us and pose for this photograph, even though many members were at the airport all day and most had not eaten for a while.  We were all starting to get very tired and hungry as it was now closing in on 6 p.m. 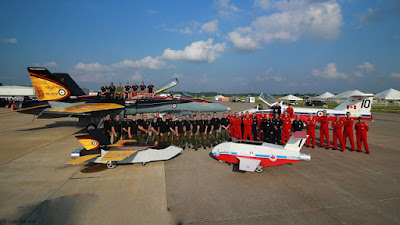 Major Indira Thackorie, Public Affairs Officer (PAO) for the Snowbirds, obtained permission to gather all the teams together and helped with positioning the aircraft that were used in the photo.  Her professionalism and friendliness earned the utmost respect for her and the Canadian Forces as a whole.
Snowbird 10, Captain Blake McNaughton, communicated with me via social media on several occasions, selflessly answered any questions or requests that I had, and introduced me to Major Thackorie upon arrival,  He gave priceless advice on how to get the photograph we requested.  Also helpful was Lieutenant Patricia Brunelle, to whom I first proposed the opportunity.  It would have been very easy to just ignore the request. Thank you for forwarding my email.
These important members of the Cape Girardeau Regional Airshow team were instrumental in making this historic photo opportunity possible:
The Cape Girardeau Fire Department, for your willingness to help us make this happen and for your support of the airshow;
Airport manager Bruce Loy for putting on a unique Wednesday evening airshow with top military and civilian acts and for allowing us unbelievable access to cover the show;
Hannah Seesing for providing our credentials and parking passes and answering all our questions in such a friendly manner;
All the airport staff and volunteers who worked the show and allowed us access to the aircraft and the aircrews - you are the unsung heroes that make events like this run smoothly for everyone;


The liaison for the Snowbirds while in Cape Girardeau for the use of your ladder. Without it this photo would lack the depth that it has.
The Aero Experience is proud to have been involved in this great Midwest aviation event, and we will continue to support this gem of a show in future years.  God bless the Royal Canadian Air Force and all those listed above for the opportunity to make this one of a kind photo possible.
(Look for more coverage of the 2016 Cape Girardeau Regional Air Festival this week)!
Posted by Unknown at 9:47 PM