The Illinois Aviation Hall of Fame held the 2016 Banquet and Induction Ceremonies Thursday at Southern Illinois University-Carbondale's Transportation Education Center.  Among the inductees this year is the Greater St. Louis Air & Space Museum at St. Louis Downtown Airport in Cahokia, a recipient of the Spirit of Flight Award for the museum's contributions to the Metro East IL and St. Louis metropolitan areas.  The museum has made many positive contributions to local and regional communities through the conservation of the area's aviation history and the numerous educational and community events held there each year.  The museum also received the AIAA St. Louis Civic Service Award in 2013. 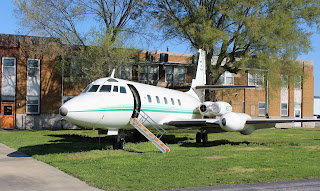 ﻿﻿
Criteria for the Spirit of Flight Award:


Significance of the Spirit of Flight Award:
Election to the Illinois Aviation Hall Of Fame is the highest honor that can be attained by people whose principal aviation activity and experience is Illinois based. It is awarded to people of good character for their excellence over a period of time. All of those selected have participated in community service, which reflects the character that earns IAHOF honors.


The Museum joins an esteemed group of inductees this year, including another Spirit of Flight Award recipient, EAA Chapter 277 based at the ceremony's host, Southern Illinois Airport in Carbondale.  Chapter 277 is recognized for active support of EAA's mission of providing Young Eagle flights, aviation scholarships, and supporting airport community events over the last 30 years.


Following the Spirit of Flight Award presentations, the 2016 Inductees were presented for acceptance to the Illinois Aviation Hall of Fame: Lt. Col. Charles Boyle, Civil Air Patrol; the Late Willa Brown Chappell (1906-1992); and Mr. Ludwig "Lou" Wipotnik (see their nomination biographies at the link above).


The Aero Experience salutes the 2016 Inductees and their predecessors for representing the highest standards of Illinois and Midwest Aviation.
Posted by Carmelo Turdo at 11:12 AM