This year Scott Air Force Base continues it's Centennial Celebration, serving the defense needs of the nation from the World War I era to the present.  From its humble beginnings as Scott Field in 1917 to operating in today's cyberspace environment, Scott AFB has grown to support a variety of missions with global impact.  Today, Scott AFB provides over 13,000 jobs and generates an economic impact of $3.5 billion for the southwest IL area.

During the last 100 years, Scott Air Force Base has adopted various missions as the U.S. Army Air Corps matured into U.S. Army Air Forces and finally the separate U.S. Air Force.  Named Scott Field in honor of Corporal Frank Scott, the first enlisted soldier to be killed in an aircraft, it was changed to Scott Air Force Base in 1948 following the establishment of the U.S. Air Force.  In the 1920s, Scott AFB was a lighter than air station, with dirigibles and balloons based in a giant airship hangar now replaced by modern Hangar One.  During World War II, over 150,000 radio operators were trained at the base's Radio and Communications school.  Today, the base is home to the follow-on to the Air Force Communications Command - the Air Force Network Integration Center.  Military Air Transport Service began it's operations at Scott AFB in 1957, and continues as the Air Mobility Command's 18th Air Force today.  Following experience from Operation Homecoming, the return of U.S. POWs from Vietnam, the 375th Aeromedical Airlift Wing supported medical evacuation missions around the world.  Today, the 375th Air Mobility Wing continues the tradition of providing airlift support and training for C-21, C-40 and KC-135 operations.  Scott is also home to the 126th Air Refueling Wing of the IL Air National Guard. 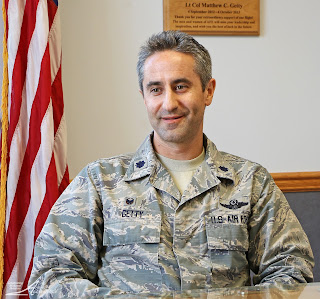 Recently, there was an opportunity to visit Scott AFB again during the arrival of the French Air Force Patrouille de France demonstration team for a fuel and rest stop on April 19. The Aero Experience coverage of the Patrouille de France arrival was made possible by the Scott AFB Command and Public Affairs staff who graciously accommodated our request.  Building on our earlier coverage of the Scott AFB Centennial Kickoff event in January, we were eager to produce another feature story touting the contribution that Scott AFB makes to the current armed forces structure and also to the local economy.  The 375th Air Mobility Wing Public Affairs Officer, Mr. Sean Clements, arranged for access to record the team's arrival, and as a great addition, included a personal briefing by 375th Operations Support Squadron Commander, Lt. Colonel Matthew Getty.  All this would not be possible without the support of the 375th Air Mobility Wing Commander, Colonel Laura Lenderman.  The media representatives invited, Joe Gurney, Larry Titchenal, Dave Kuenzel and Carmelo Turdo, are seen pictured here with Lt. Colonel Getty. 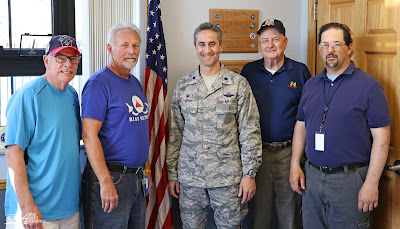 Lt. Colonel Getty is the Commander of the 375th Operations Support Squadron, and is responsible for critical services including weather forecasting, air traffic control, airfield management, transient aircraft support, aircrew training and scheduling, life support services, ground support equipment maintenance and other related services.  He received his basic flight training in an exchange program with the U.S. Navy at NAS Whiting Field, FL, and then returned to the U.S. Air Force for training in T-1 Jayhawks.  He then flew the Lockheed C-5 Galaxy from Travis AFB, CA and Gulfstream C-20 in Hawaii and Florida before coming to Scott AFB. 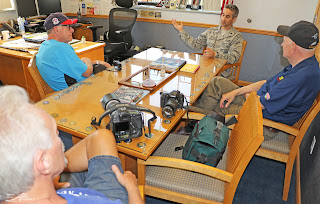 Naturally, we started our discussion around the visit of the French Air Force Patrouille de France scheduled for later that day.  Lt. Colonel Getty told us that Scott AFB was contacted by the team about 6 months ago for availability as a fuel stop for its World War I Centennial Tour.  Of course the answer was yes, though it was disappointing that they could not come back for the Scott AFB Centennial Airshow June 10-11.  “This is a mission that Scott AFB continues to provide, and has provided for a hundred years," he told us.  "We are right in the middle of everything.  A lot of the aircraft coming through are stopping here for services.”

Scott AFB is in a unique position geographically and operationally to have a significant impact on air operations in the U.S. and around the world.  The 375th Air Mobility Wing hosts 4 C-40Cs and 8 C-21As in addition to the 9 KC-135s flown by the 126th Air Refueling Wing, IL Air National Guard.  Scott AFB still has the space and operational capability to attract and support additional aircraft from other bases in need of servicing.  "We provide in-transit service to everyone," Lt. Colonel Getty continued.  "We are partnered with Mid-America Airport, so we have traffic on the civilian side also.”
Through a concerted effort to provide operations support services to other units over the last two years, the 375th Operations Support Squadron has contributed to the base's 63% increase in air operations without adding aircraft to the wing and with the resources already available.  Lt. Colonel Getty is quick to give credit to the current base facilities, service members, base leadership and a supportive community.  “Scott Air Force Base is a gem," he said.  "We have an 8,000-foot runway.  We have a 10,000-foot runway.  Fully instrumented on all sides.  We have a phenomenal community here.  We have no issues with encroachment.  We have this engaged community that wants this installation here.  We have very little competition here and generate billions of dollars of (economic) impact.  Of course we can’t do this without the support of our Group, and our Wing, which is there all day long for us.”


"What we found is that there is a regional void for the capabilities that we are offering," Lt. Colonel Getty explained.  "We asked, ‘What can we offer to the Department of Defense and the civilian community at large?’  This installation is critically valuable, and we are simply making that well known and opening our doors to make sure that we get those aircraft."


Additional operations capabilities contribute to increased readiness, and proficiency in peacetime operations contributes to combat capability.  Having more traffic is important for training and deployment readiness.  Lt. Colonel Getty described the ripple effect of the increased operations.  “Readiness internal to the squadron is spilling out into the wing, and then beyond the wing it spills out to our partners in the Air National Guard, and to the other services and to the civilian community.  It’s a great time for Scott Air Force Base.”
The recent period of significant growth in air operations is partly due to added capabilities at the base itself.  Hot-pit refueling is now being used.   Recently 5 Blackhawk helicopters used hot refueling while on a training mission.  “The reason we added that was to provide a service, in particular for the Illinois Army National Guard, so that they can come here (for hot refueling)," he continued.  "We looked in areas where we can increase operations here at Scott Air Force Base, and this visit is just a small drop in that pond that helps us with our readiness.”
Another added operational capability is a newly completed parachute drop zone, used for the first time March 1.  “We now have a drop zone here that goes from the surface all the way to 25,000 feet, coordinated through Kansas City Center," Lt. Colonel Getty added.  "We have the hot refueling.  There are not many installations that can develop that capability at their airfield."
The cumulative effect of the increased air operations, the new on-base capabilities and the exposure to civilian flights at Mid-America Airport was put in very real terms as we wrapped up our time with Lt. Colonel Getty.  “From a readiness perspective, when I send an airman to work in a tower downrange, in that pattern they can have small, propeller-driven aircraft, they can have UAVs, they can have F-16s and they can have KC-135s and C-17s.  When I put a Cessna or a light twin in the pattern, there is nothing that I see that is problematic there.  I need my controllers to know how to work that type of pattern that is closely mirroring what my airmen will see when they show up in Kabul.” 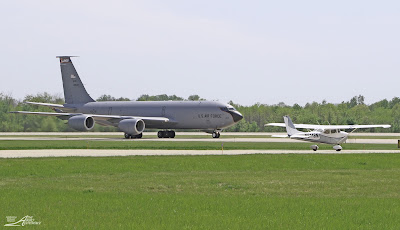 The Aero Experience and the other members of our media group wish to thank Lt. Colonel Getty for offering this interview during our recent visit to Scott AFB.  We wish for him, his staff and all service members further success in making Scott AFB an even greater Midwest military installation.

Posted by Carmelo Turdo at 6:37 PM