Midwest Aviation has been very active recently as the spring has turned into summer, and The Aero Experience continues to feature more great aviation businesses in our region.  The warm weather brings with it the opportunity to participate in perhaps the ultimate expression of aerial freedom, skydiving.  We visited the Gateway Skydiving Center at Greenville, IL Municipal Airport and learned that a combination of staff experience, customer empathy and the love of the sport make this the ideal place to learn and perfect your skydiving skills. 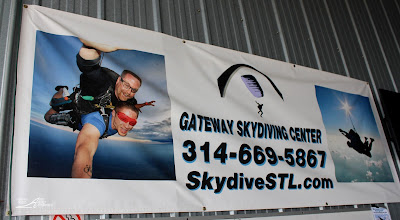 During our time with Gateway Skydiving Center Operations Manager Arnel Smajic and pilot Robert Coyle, we were given a warm welcome and had an open discussion about skydiving as a sport and a passion.  Arnel Smajic, son of U.S. National Skydiving medalist Zuko Smajic, carries on the family tradition of skydiving excellence by teaching others how to safely experience the sport in central Illinois.  Even after 4500+ skydives, he looks forward to each session with students as he shares his skill and enthusiasm with them.  Pilot Robert Coyle's mission is to safely bring his skydivers to the correct release point on what may be their first ever flight in a general aviation aircraft.  New students can be greatly reassured by a smooth flight from their pilot and positive reinforcement by their personal instructor. 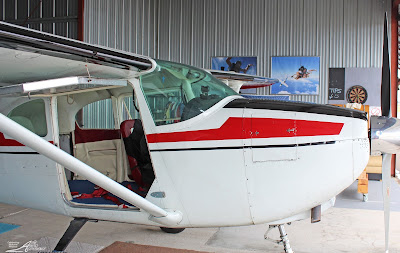 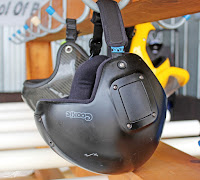 The first jump is a tandem jump, with the student attached to an instructor.  It is a safe way to let the student experience skydiving without having to control the descent and landing.  It is also a way for the student to evaluate whether it is something he or she wants to do again with further training.  Training for the tandem jump is done just before the flight and can be done in a group.  A student taking a tandem jump must weigh less than 230 pounds, but it is not necessarily age limiting.  It is a mental more than physical sport experience.  “When you do a tandem skydive, we take it (the stress of controlling the skydive) off of you," Smajic said.  "We keep it brief.  We know what it’s like to be that first-time student."

Training for the solo jump takes 6-8 hours.  Two instructors hold on during the initial jumps.  “On every jump you have a different task," Smajic continued.  "Number one skydive is to look at the altimeter and make sure you practice touching the handles to pull the parachute.  The next skydive we give you more – like team turns – together we turn slowly in the sky to make sure you know what your body is doing.  The third and fourth jump we start releasing you – the 'training wheels' are coming off.  We are still with you, but you are doing everything on your own – you’re pulling the parachute, flying the parachute.  We talk you down on the radio.  Then the radio comes off after five or six jumps and you move on from there."  The goal is to complete 25 skydives to get your license.

Learning where to land is part of the early training.  Arnel Smajic described the process.  "We do what’s called a ‘dirt dive.’  On the ground we go through everything.  We pull out an aerial map.  Each jump has a task required by the United States Parachute Association and we have a sheet we fill out before they go on each jump.  We want to make sure they know what they know before they go.  They draw for us the landing pattern  - they show they know where they are, where the silos are, where Lake Carlyle is, where the airport is.  Everything is training.

“These parachutes are very controllable.  We are fortunate enough to be at this airport that has lots of space around it.  But we do train them right away to stay accurate, to be predictable in the parachute.  We have landing patterns and we declare them before we go up.  We create a foundation that every student will carry on, just like a pilot, to be smart and be safe.”

Robert Coyle added his perspective of flying one of the school's two Cessna 182 aircraft.  "It's fast-paced and fun.  I am on a mission every time I go up to put them where they need to be based on winds aloft.  It’s a great experience.”  The flight pattern stays within a few miles of the airport based on winds and reaches 10-11,000 feet.  The door is modified to open upward, and is held open by the wind.

“From a pilot’s standpoint, there is a constant CG (center of gravity) change – you never see that in any other aspect of aviation," Coyle continued.  "I am constantly trimming (pitch) as they move preparing for tandem jumps.”  The C182 has enough room, power and fuel efficiency for the mission.  The school’s plane has STOL modifications that allow it fly at slower speeds of about 80mph.

Coyle also remarked that he renews his appreciation of flight by the reactions from the first-time students.  “People on first flights are amazed by flying next to clouds…We get so used to it flying all day.  They say, 'That is pretty cool we’re next to a cloud!'  They make us appreciate it more.” 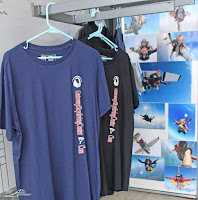 Arnel Smajic related some insights on how to describe the experience of a first skydive.  "I’ve taken thousands of people on their first jump, and they will say that the scariest and the best part was jumping out.  When the door opens, all your senses are kicking in.  Some people describe the jump itself as a euphoric type of experience.  Some say it’s a freedom feeling, some say time slows down, and some people say they don’t remember half of it – it flew by so fast.  Some people have sensory overload, and some are super heads-up.  You don’t know until you go through with it.

“People always call me and ask me what skydiving is like.  How do you explain to someone a feeling?  There is no stomach-drop feeling.  After we land, besides saying ‘This is awesome,’ the next thing they say is 'It’s nothing like I expected it to be.’  We have people that have never been in an airplane – this is their first aviation experience.  That (skydive) becomes their first big step!”  He has observed that previous flying has little effect on the success of the training.

Occasionally, Gateway Skydiving Center will do a tandem jump with a disabled or terminally ill person who wants to experience a skydive.  Smajic is obviously moved as he describes these occasions.  "Our job is special.  Once or twice a month, we have people with cancer, MS, disabled veterans or those with other illnesses that want to do a skydive…They know that you are doing extra for them and they do whatever they have to and pull it off.  You can’t explain that feeling of satisfaction." 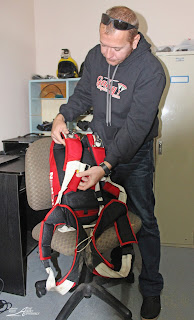 So what does a skydiver do during a cold Midwest winter?  Go to the southern hemisphere of course.  Arnel Smajic brings his parachutes with him to Australia and New Zealand.  The United States Parachute Association (USPA) has transferable international standards and there are special USPA drop zones in other countries as well.  There he hones his skills with other experienced skydivers and gains valuable experience in a very challenging environment.  He can also get more use of his high-performance sport parachute made by United Parachute Technologies that is highly maneuverable with high-speed swooping performance.

The Aero Experience thanks Arnel Smajic and Robert Coyle for their hospitality during our visit and for taking time for this interview.

Posted by Carmelo Turdo at 4:43 PM