The Space Museum is pleased to announce the grand opening of their new addition, the Grissom Center March 16th, 2019. To help us celebrate this momentous occasion we are reviving a previous museum event “Show Me Space.”  This year’s agenda is truly cosmic!  Our goal is not only to honor the Grissom family but to also showcase Missouri’s huge aerospace legacy.


Since the Grissom Center honors America’s iconic astronaut hero “Gus” Grissom, Lowell his brother and Gus’s sons Scott and Mark will be in attendance. George Leopold the author of CALCULATED RISK; THE SUPERSONIC LIFE AND TIMES OF GUS GRISSOM will host a book signing at the Grissom Center to further honor this American hero.


Astronauts Charles Walker, Linda Godwin and Richard Richards all of whom are either Missouri natives or have close ties with Missouri and astronaut Jerry Ross a space flight record holder will be attending. Rob Kelso a former Space Shuttle Flight Director will share some little known and hilarious stories about space flight. If circumstances permit, astronaut, Janet Kavandi, a Missouri native and the current Director of the Glenn Research Center will also be in attendance.


Janet Ivey of public televisions’ “Janet’s Planet” and a member of the Board of Governors for the National Space Society will moderate the open panel discussion between the public and the dignitaries.


Although astronauts are perhaps gifted with special talent and initiative they ARE NOT super heroes by accident. They are people just like you who have had a dream, set a goal and worked very hard to achieve it. In that respect they are REAL super heroes. Super heroes of pop culture have had their powers imparted by some accidental or otherworldly means for which they can take no credit. The astronauts, on the other hand, have achieved their status through determination and hard work and are therefore far more worthy to be considered heroes. Attend “Show Me Space” and be inspired so you too can do super hero things!


If you are interested in spending a day with SPACE ROYALTY then save the date.


Further information and tickets are available at http://www.space-mo.org/.


We continue to dream; SEE YOU THERE! See flyer below. 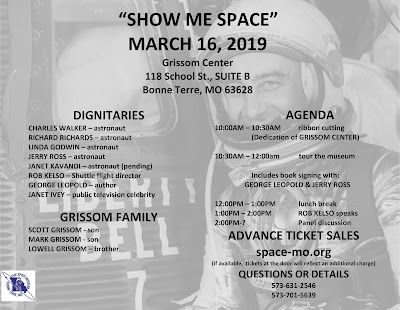 Posted by Carmelo Turdo at 9:56 AM