The 50th anniversary of the last Mercury spacecraft flight was commemorated yesterday with a panel discussion hosted by the Missouri Aviation Historical Society at its monthly meeting at Creve Coeur Airport.  Mercury Atlas 9, with Gordon Cooper's "Faith 7" Mercury spacecraft, lifted off from Cape Canaveral on May 15, 1963 and splashed down the next day after completing 22.5 earth orbits in 34 hours and twenty minutes.  Cooper's flight was shortened due to mechanical issues with the spacecraft, and his manual reentry and landing was considered the most accurate of the Mercury program.  A panel of seven McDonnell Aircraft employees who worked on the Mercury spacecraft, including Lowell Grissom, brother of astronaut Virgil I. "Gus" Grissom, answered questions from the group.  They also shared anecdotes of their experiences with the Mercury astronauts, including their influence on the final design of the spacecraft.

President of the Missouri Aviation Historical Society and host of the event, Dan O'Hara, introduced the panel members: 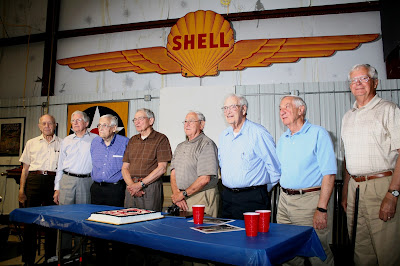 The panel was asked whether the United States was ready to take on the challenge of manned space flight.  Several panel members responded.  Jerry Roberts: “Now the Mercury and Gemini spacecraft look very primitive.  You have to remember, that was the state of the art.  That was the best we could do…The job was to take the warhead off a ballistic missile and put a man there and launch him and bring him back safely.  That’s exactly what it was…If anybody had said in ten years you’re going to the moon, you’d have said that was ridiculous.  But we were so young, we didn’t know it couldn’t be done…These were new problems, and none of the things that happened before would have solved the issues we faced."

Bob Schepp: “We were in the analog world, so we had to make judgements as to whether the device was functioning – we had to do a lot of thinking.  Today…there is just a button to push, and see what answer you get.”  Dean Purdy: “With the launch of Sputnik, the space race had started.  We could not have waited at that point.  'Mr. Mac' was a visionary.  He was working on the early proposal for the Mercury Program in 1957.  But we were always behind the Russians when it came to launch capability." Earl Robb: “McDonnell, through 'Mr. Mac’s' Foresight, had started the design several months before the government asked for bids, with his money before there was a contract.”

The Mercury spacecraft team was assembled from many current employees, although the new Space Division was formed to take on the project.  Panel members Norm Beckel and Bob Schepp were transplanted from the budding F-4 Phantom II fighter program to work on the new spacecraft.  Norm Beckel: “When the Mercury Program came along, they divided the groups into aircraft and space/missiles.  I was moved from the Phantom to Mercury…”  Bob Schepp: “I was working the F-4 autopilot flight testing when they called me to Mercury, and from then on I was full-time Mercury.”


Design of the Mercury spacecraft was also a topic of interest to the group.  Several panel members responded to a question regarding commonality of equipment between aircraft and spacecraft and the use of off-the-shelf equipment.  Dean Purdy: “One of the ground rules on Mercury was to use available equipment when we could…But we used different materials than on aircraft – titanium rather than aluminum.”  Bob Schepp: “The autopilot was similar to what was used in airplanes.  We had to use thrusters instead of ailerons, so the output was different.”  Norm Beckel: “The main criteria was size and weight…items had to be built to fit into a small spot.”  Jerry Roberts: “This was at the advent of the transistor…it was still very difficult to miniaturize anything…”


The controversial window design was also discussed.  Dean Purdy: "A very small round window and periscope were provided – the astronauts wanted bigger window."  Bob Schepp: “All the windows had inscribed on them the various pitch angles to line up the horizon with the attitude of the spacecraft.  That was in case the autopilot didn’t work.  Cooper used the scribe in the window to line up with the horizon for reentry.”


The Mercury spacecraft program introduced the astronauts into the design and production process, a phenomenon known as the "astronaut interface."  Earl Robb: “All of us loved to work with the astronauts.  McDonnell Aircraft established a McDonnell astronaut, Bert North.  He was a test pilot.  He was the interface with the astronauts.”  (Mr. North is now in ill health and was unable to join the panel).  Bob Schepp: “Most of us enjoyed talking to the astronauts because they were engineers…It was really fun talking to Gus (Grissom) because he had to learn our autopilot.  We spent hours trying to convince him how that gyro worked…”  Jerry Roberts: “He (Grissom) spent hours trying to convince us it wasn’t designed right!”


All in all, the panel was in agreement that working at McDonnell Aircraft during the space race was a very satisfying vocation.  Jerry Roberts summed it up well: “We worked until the problem was fixed, but we never dreaded going to work…What could you do today that has never been done before, of that magnitude?  It’s hard to imagine what we didn’t know at that time."

Posted by Carmelo Turdo at 9:57 PM