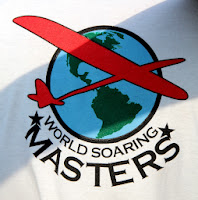 Your scribe had the honor of being the contest director for the 4th World Soaring Masters held in Muncie, Indiana September 20th through the 22nd of this year.  Hosted by the League of Silent Flight (LSF) on the National Flying Site of the Academy of Model Aeronautics (AMA) and sponsored by JR Radios and Horizon Hobby, this event is a premier radio controlled soaring contest with many of the best fliers in the U.S. and other countries attending.  One of the few sailplane events around with cash prizes, the level of flying and competition is top notch and a very competitive. 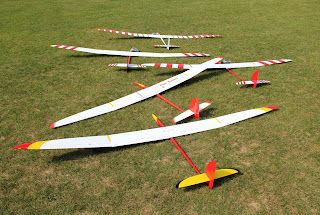 Flying started on Friday with an interesting day of weather to add a challenge to the day's flying.  Flight tasks were 12 minutes and an 80 point landing (graduated tape).  The morning started off with a breeze and light lift that took some effort to find and use.  As the day wore on, it progressively got windier as a storm front approached from out of the west-northwest.  A break in the flying was called when the rain came, but after the storm blew through, there was time for one more round of flying to take place prior to a steady rain settling for the evening.  That post storm air was glass smooth and was a distinct change from conditions prior to the storm.  Even with the rain and some challenges with the winch lines, we managed to achieve 6 rounds of flying for the 46 fliers in attendance.

Saturday morning was decidedly cooler than Friday, and low clouds blew through early in the morning leaving blue skies and puffy, white clouds.  Lift was initially hard to find but soon the thermals were popping and models were skying out to high altitudes.  Along with the lift, though, came some impressive sink.  For many either riding or chasing lift downwind, the flight back to the landing tape was cut short by the sink.  The day ended with another 8 rounds being flown.
﻿
﻿Sunday started off with a beautiful but cool  morning and clear skies.  The first few groups of fliers were stuck with flying in smooth but lift free air which required a high launch and precise flying with a well trimmed model to get the most from the launch height.  It wasn't long though before light patches of lift were being found and the fliers were starting to achieve their 12 minute target times.  Three more rounds were flown for a total of 17 rounds to complete the Preliminary fly offs.  From those scores, the top 10 fliers were selected for the Championship Fly Offs, 5 rounds defining the prize winners.
As the day worn on, the breeze settled down and the lift progressively got stronger and more well defined by the start of the finals.  The first two fly off rounds found everyone skying out in different parts of the sky and the scores were settled by the accuracy of achieving the precise 12 minute target time and a high landing score.  The third round started off much the same way, but as some of the fliers drifted well downwind with the lift, the sink and a strong following breeze moved in to keep some of the fliers from getting back to the field, let alone to the landing tapes.  Others decided that getting back to the field and the landing tape was worth taking a hit with their scores due to the shorter flight times.  In many ways, the third round settled the final results. The final two rounds were full flights for everyone though Ben Clerx found his sailplane not responding to controls while coming in to land.  After a few descending circles, the model came to rest in an adjacent cornfield, thankfully with no damage.

The top 10 fliers, with 1st through 5th winning trophies along with cash prizes, were: 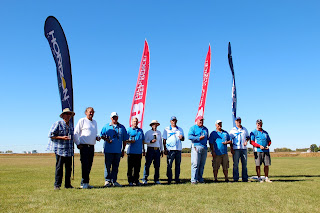 ﻿﻿﻿﻿
﻿﻿﻿﻿
A huge thank you goes out to JR Radios and to Horizon Hobby for sponsoring and creating such a great event.


Here are some more scenes from the World Soaring Masters:

The new video below posted by Horizon Hobby's John Diniz captures the flavor of the competition:

Posted by Carmelo Turdo at 7:40 PM