The Missouri Aviation Historical Society celebrated the upcoming 60th Anniversary of the first flight of the F-4 Phantom II (May 27, 1958) at their bimonthly meeting last Thursday. Over 150 members and guests attended the event, which featured memorabilia displays, custom anniversary cake from McArthur’s Bakery and a panel discussion with expert testimonials from McDonnell Aircraft engineers and military pilots who flew the legendary Phantom II. Missouri Aviation Historical Society President, Dan O’Hara, welcomed everyone before turning the program over to emcee and panel member, Gary Chambers. 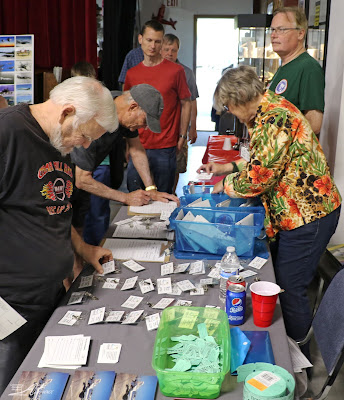 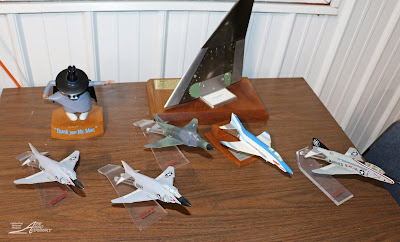 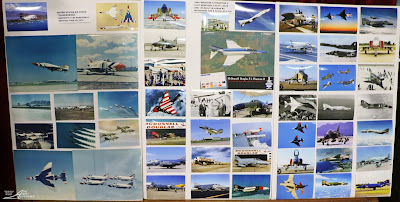 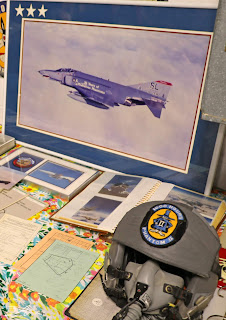 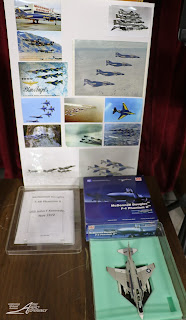 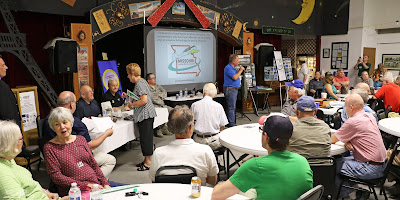 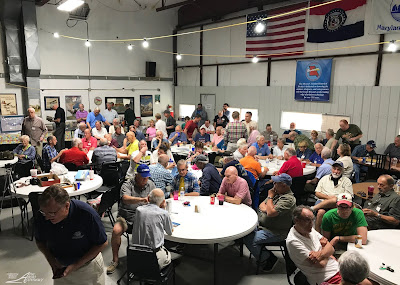 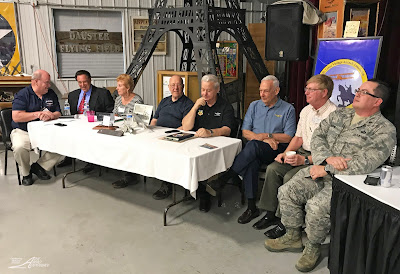 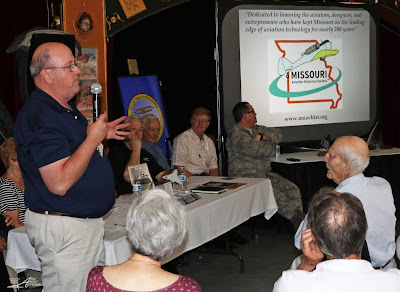 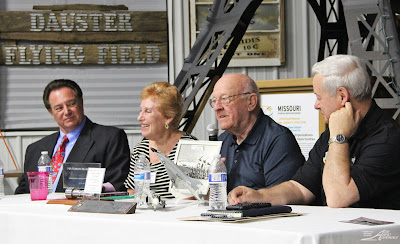 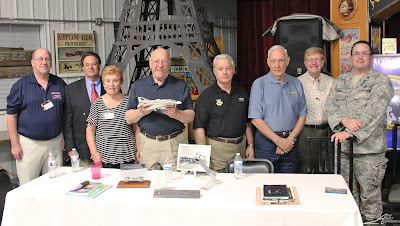 Members of the panel related their personal experiences with the production and operations of the F-4 Phantom II (video of the discussion will be available on the Missouri Aviation Historical Society website soon). The brief biographies below attest to the stature of the panel members:

Gary Chambers:
Gary Chambers flew as a Weapons Systems Officer for twelve years, accumulating over 1,600 hours in the F-4C, F-4D, F4E, and RF-4C models with Kentucky, Indiana, and Alabama Air National Guard units. He graduated from the USAF Fighter Weapons School in April 1986, three weeks before Top Gun hit the theaters. He was trained in PAVE SPIKE laser designation and did Follow On Test & Evaluation on the Navigation Weapons Delivery System (NWDS) ring laser gyro inertial navigation system.  Mr. Chambers is an executive board member of the F-4 Phantom II Society and curator of the group’s photo archives.

Donald C. Nagel:
Donald Nagel worked at McDonnell Douglas in structural mechanical design. From September 1968 through 1970, Mr. Nagel was a member of various engineering groups supporting design changes and improvements to the F-4 and F-15 airframes.  Studies included cost/performance tradeoffs, composite material utilization, internal systems, drag and wind tunnel analysis, and external mold line definition. During 1969 and 1970, Mr. Nagel participated in the TISEO (Target Identification Electro-Optical) modification program on F-4E aircraft. TISEO was a long range camera that was incorporated on the left inboard leading-edge flap of a F-4E aircraft to identify friendly/unfriendly aircraft over the skies in Vietnam.  He participated in the Advance Wild Weasel modification program that added upgraded missile jamming capability to F-4C aircraft. Mr. Nagel designed major portions of the fatigue repair for the U.S. Government ECP that resolved cracks in the spar fasteners on F-4E aircraft and in 1971 he began working on the design for incorporating high speed maneuvering slats on the leading edge of the F-4E inner and outer wing.

Bonnie Barkey Moore:
Bonnie Barkey Moore is the proud daughter of Nettie and Herman D. Barkey (Father of the F4 Phantom). She retired from McDonnell Douglas in 1996 after 34 years in Personnel/Human Resources.  She is married 30+ years to George Moore, a Navy veteran and MACAIR teammate. Her first-hand stories added a unique perspective about growing up with Herman Barkey and the birth and development of the F-4 Phantom II project.

LCDR Bill Smith:
Commander Smith began his Naval Aviation career by becoming a Flight Engineer on the PBY-5A Catalina while finishing high school. He entered the Navy flight training program in September, 1955, receiving his wings of gold in March, 1957. He flew most of the Navy’s jet fighters: the F9F-2 Panther & F9F-8 Cougar in VT-24, FJ-4 Fury in VF-792, F-8 Crusader in VF-124, and the F-4B/J Phantom II in VF-142. Bill transitioned to the Phantom in 1968.  The majority of his flight hours were in the Phantom while attached to VF-121 and VF-142 Ghostriders, NAS Miramar, California. He made the first target tow with an F-4J and the 50,000th Phantom II carrier landing aboard the USS Constellation.

Patrick Kesler:
Patrick Kesler earned a BS degree in Aeronautical Engineering/Aerodynamics and a Masters degree in Business Management. He was a Structural Test Engineer at Cessna Aircraft, Military Division, prior to entering USAF in 1969. Mr. Kesler began his USAF active duty as a Project Officer/Test Engineer at the Air Force Missile Development Center, High Speed Test Track, Holloman AFB, NM, (firing rocket sleds). He later completed Undergraduate Pilot Training and began his flying career as a reconnaissance pilot in the RF-4C Phantom II in 1971. Mr. Kesler served tours of duty in Tactical Air Command (TAC), Pacific Air Forces (PACAF), US Air Forces in Europe (USAFE), and Air Force Systems Command (AFSC). He retired after 20+ years and flew as a commercial airline pilot with US Airways, flew as a corporate pilot for Stifel Nicolaus Investments, and currently flies the B-25J Mitchell Show Me with the Missouri Wing of the Commemorative Air Force. Patrick Kesler's father, Peter Kesler, worked at McDonnell Aircraft for over 30 years as a photographer, and the family was based at Edwards AFB during F-4 flight tests from 1958 through 1959.

Colonel Peter B. Field, USMC (Ret):
Colonel Field is a graduate in Mathematics from The Citadel in 1962.  He entered the Marine Corps and completed flight training in 1964.  He served two tours in the A-4 Skyhawk, including shipboard cruises (300 carrier landings) and in Viet Nam, (225 missions).  He was a flight instructor in advanced jets and went to US Navy Test Pilot School in 1971.  Between assignments at the Test Center, he flew two tours in F-4 Phantom squadrons. After 27 years of Marine Corps service he became a Chief Research Program Engineer at McDonnell Douglas. He presently flies his experimental Lancair 320 which he completed in 2009 and serves as an Expert Witness consulting for legal firms.

Robert M. (Bob) Dowgwillo:
Robert Dowgwillo is an Aerodynamics Engineer at Boeing Research and Technology - St. Louis. Mr. Dowgwillo lent his expertise to the discussion of the aerodynamic quirks of the F-4 Phantom II, especially the boundary layer control system, that made the aircraft stable on approach to landing on aircraft carriers.

Following the panel discussion, the custom 60th Anniversary cake was cut by Bonnie Barkey Moore, and served, and the exhibits remained on display for a short time afterward. 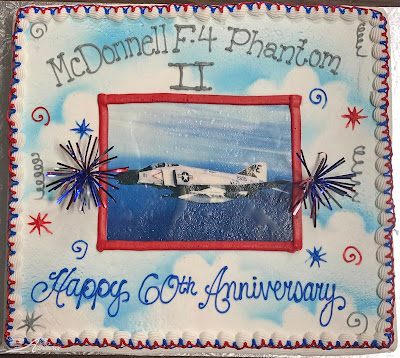 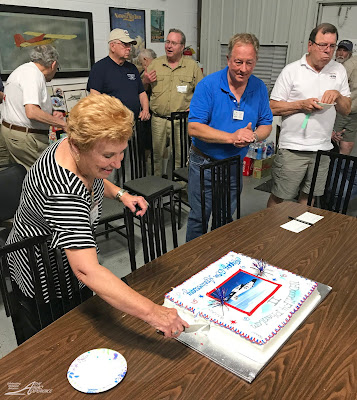