Two general aviation pilots have begun a flight that most of us only dream about - a cross-country tour of major U.S. landmarks in homebuilt Rans RVs.  Matt Ziemann and his brother, Mike, set off to Kitty Hawk, NC earlier this week where the Wright Brothers began their conquest of the air in the first practical powered aircraft.  Matt and Mike then continued on to Spirit of St. Louis Airport in Chesterfield, west St. Louis County.  The flight is a personal journey, one whose destination is the journey itself.

"I wanted to use this trip to show just how amazing general aviation is and just how many opportunities aviation can provide," Matt Ziemann told The Aero Experience.  "The
idea that two private pilots can take off in two homebuilt airplanes, fly coast to coast, in formation, covering 23 states, seeing our national treasures, and flying into anything from a major metropolitan airport to a back country Idaho STOL strip, all in 14 days, is something that only general aviation can allow you to do."  It's about freedom, but also about the spirit of adventure and the sheer enjoyment of flight in a country that offers so many journeys.

Joining Matt on the remainder of the trip is Paul Franzon, whom Matt calls "Aussie," (you'll know why by his accent).  Paul and Matt, along with other local pilots, fly formation together in their home base of Raleigh, NC  - often just for fun, but also flybys for events.
﻿
Paul landed at St. Louis Downtown Airport (CPS) Tuesday in anticipation of meeting up with Matt and continuing the journey westward.  However, weather and minor mechanical issues with his aircraft kept Matt at Spirit of St. Louis Airport overnight, so Paul took off later that day to meet up with him and get some protection from another round of thunderstorms. The flight resumed on Wednesday.  Paul was already planning a flight to AZ, and suggested that Matt join him "and it sort of grew."  Although Paul has made cross-country flights in the past, some of the destinations on this trip are new to him.  Flying is always a serious endeavor, but Paul described the upcoming journey as "Fun!" That says it all. 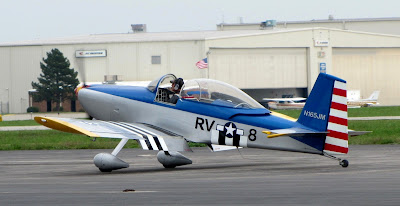 Paul Franzon took a few minutes with The Aero Experience during his short stop at CPS, so here are a few video clips describing the flight in his own words:

Matt Ziemann reiterated the purpose of the flight with his friend Paul, "I had been planning this trip in my mind for years, and finally decided it was now or never. I approached Paul, thinking he might want to do one leg, like just make it to Colorado or the west coast, but when I showed him the whole route he said 'I’m in!'  I want to get the message out to help inspire not only kids to fly, but adults as well who might otherwise get too wrapped up in the cost of flight training and lose sight of the big picture about why we learn to fly.  Even existing pilots need a reminder of why we fell in love with flying in the first place, and I want to motivate them to do things like this."
Travel Log Update from Matt on Friday:
"We’ve had two very long days...but we left on Wednesday morning and made it to Colorado Springs. Yesterday we hit Leadville, CO (highest airport); Durango, CO; Monument Valley; Lake Powell; the Grand Canyon; Meteor Crater; and Sedona, AZ.  The Flight to St. Louis was great...it was beautiful.  Other than headwinds, it was smooth with beautiful skies and a sunset arrival into St. Louis..."
Also from Matt: The points of interest along our route include:

Kicking off the trip at First Flight with my brother who is also a
pilot (the Ziemann brothers at the site of the Wright brothers; the
first flight with the first leg of the journey)

St. Louis (our hometown, the Gateway to the West, and Lewis and
Clark’s starting point for their westward journey)

Colorado (fly over the Air Force Academy (our alma mater), Pikes Peak, and Leadville to hit the highest airport in the US)

Aurora, Oregon (visit Vans Aircraft and see the birthplace of our planes)

Mount Rushmore
Ottumwa, Iowa (the first stop on my solo student cross country in 1997)
Dayton, Ohio (Wright Brother’s home and Air Force Museum)
Return to North Carolina
To follow the progress of the flight, please visit their travel log on the Vans Air Force site: http://www.vansairforce.com/community/showthread.php?p=702396#post702396.
Special thanks to pilots Matt Ziemann and Paul Franzon, and journalist Jeff Wilson for assistance with this story.