For a little bit of a change of pace from full size aircraft features, there’s a whole other world of model aircraft that many participate in and enjoy with the same type of passion.  From free flight to control line and radio control model aircraft, many people enjoy aviation without ever climbing into a cockpit and taking to the skies, yet they can enjoy it every bit as much as those who go flying.

This past weekend, the Mississippi Valley Soaring Association (MVSA) hosted the 2013 Gateway Soaring Open.  The club has been hosting this event for well over twenty years, drawing fliers in from across the Midwest to compete in a thermal soaring contest over the two day weekend.  So you ask, what is thermal soaring?  Thermals are columns of rising, warmer air that develop s from uneven solar heating of the ground.  As the air above the ground is heated, it develops into bubbles which eventually break away from the ground and rise into the air.  Cumulus clouds are usually the visual cue of thermals as they form from the warmer, moist air rising to a height where it cools and matches the surrounding air temperature.  The moisture vapor carried aloft forms the cloud.  When you see hawks, eagles and turkey buzzards circling in the air, they are riding the column of rising air and climb to great heights before leaving the thermal to travel further on or go off to look for the next thermal.  When you see swallows buzzing around a field and circling in a small area, they are usually feeding on insects that are being pulled aloft by a bubble of warm air, making them easy prey for the swallows.  And sometimes you see “dust devils” which are small, powerful thermals well marked by the dust and debris that they pull off of the ground.  Free flight and radio controlled model sailplanes (no motors/props) make use of the same air that the birds use to prolong the time of the model’s flight.


This year’s event had separate contests set for each day along with a trophy recognizing the best overall score for the full weekend.  Saturday’s contest had a target time of ten minutes (Sunday’s target time was twelve minutes) with a graduated landing tape (0 to 100 points), scoring being one point per second up to the target time and losing a point a second for going over ten minutes.  Groups of up to 5 fliers launched within seconds of each other so that they all flew in the same conditions with the best time/score being normalized to a 1000 points (plus landing points) and the other flier’s time/score being a percentage of the best time.


Most sailplane models flown had wingspans anywhere from 3 to 4 meter (118-158”) and typically weighting in the range of 50 to 80 ounces.  Models come in two varieties – “RES” which is rudder, elevator and spoilers and “full house” which usually is rudder, elevator, ailerons and flaps.  Launching is done with a 12 volt battery operated winch which launches the model up to 500-600 feet from where the model goes out and looks for thermal lift.


I have been building and flying R/C sailplanes for close to 30 years and have thoroughly enjoyed the journey.  To build then fly the model sailplane, finding the lift and then seeing the model sailplane climb in that lift is a truly satisfying accomplishment.    Whether sport flying or flying competitively, there is something for just about everyone to enjoy.
For more information on R/C Soaring, go to:
Mississippi Valley Soaring Association - http://www.mvsaclub.com
R/C Soaring Digest - www.rcsoaringdigest.com
League of Silent Flight - http://www.silentflight.org/
Getting Start in R/C Soaring - http://www.rcsoaringdigest.com/pdfs/GSinRCSr.pdf
﻿ 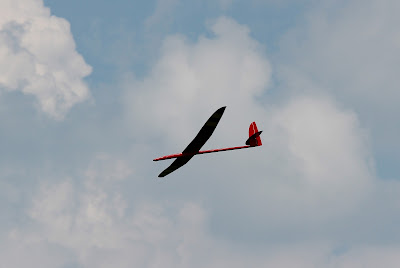 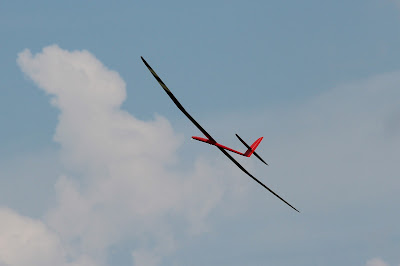 (Editor's Note: The Aero Experience thanks contributor Mark Nankivil for this primer on model sailplanes and coverage of the Gateway Soaring Open).
Posted by Carmelo Turdo at 10:58 PM