The September meeting of EAA Chapter 64, held Tuesday evening at St. Louis Downtown Airport, included a presentation on the history of the U.S. Navy Blue Angels by aviation historian Joe Gurney and Navy Captain (Ret.) William Switzer.  Captain Switzer flew with the Blue Angels as a Lieutenant during the 1971 and 1972 seasons in the McDonnell Douglas F-4J Phantom II, and also flew over 20 different aircraft including the F-14 Tomcat at NAS Miramar during the filming of the movie "Top Gun."   Joe Gurney gave a comprehensive view of the Blue Angels aircraft used since the 1946 season, while Captain Switzer relayed his experiences flying the F-4J as Opposing Solo No. 6 in 1971 and Slot No. 4 in 1972.  Members and visitors also viewed a film of the team flying the current F/A-18C Hornet, which in this year of uncertain federal budgets, is as close to a Blue Angel performance as possible.


﻿
As can be seen in the above videos, flying the Phantom II with such precision can be very challenging.  During a typical airshow, Blue Angel pilots pull between -1 and 9+ g loads (force of gravity: 1g = normal weight on ground, 9gs = 9x normal) during their maneuvers.  However, the Blue Angels pilots do not use anti-g suits - standard equipment for military tactical jet pilots that uses inflatable air bladders to keep blood from flowing out of the brain to the feet.  The air bladder inflation is a distraction that often makes the pilot move the stick slightly, which at close formation can lead to collision (the USAF Thunderbirds fly F-16s which have side stick controllers, allowing them to wear their anti-g suits).  Blue Angel pilots have to focus on the aircraft in formation and fly 36” apart during maneuvers.  Captain Switzer remarked, “It had to be total concentration, and you knew within about an inch or two if you’re high or low.  That’s all you focused on for the whole airshow.”

“We were flying about a hundred feet above the ground, inverted, and you never looked inside the cockpit," Captain Switzer continued.  "Even if you looked inside the cockpit for even a split second, your instruments are lagging a second or two behind what the airplane is really doing.  So you just set your nose out there on the horizon and you know exactly what you’re doing.” 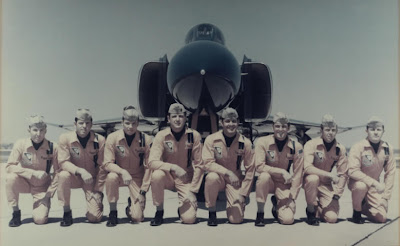 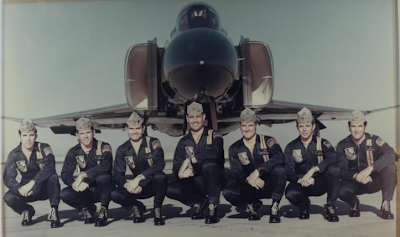 
Later in his career, Captain Switzer flew F-14 Tomcats as Commander of VF-24, including the period when the movie "Top Gun" was being filmed.  Four of his planes and crews were dedicated to the movie, and as can be imagined, many stories of working with the actors came from the evening's discussion.  A few years earlier, on December 19, 1981 then Cdr. Switzer and his Radar Intercept Officer Lt. Dave Baranek were forced to eject from their Tomcat when the arresting cable released from the ship and remained attached to the plane's tail hook as it rolled off the USS Constellation.  Both crew ejected safely and were rescued from the water within minutes, with Cdr. Switzer coming to the surface after automatic life preserver and oxygen equipment performed their functions as advertised.  While in the water awaiting rescue, he recalled mistaking various pieces of debris for sea snakes and sharks.  It was later determined that the arresting cable was not set for the proper weight of the Tomcat, and it's mounts fractured when the aircraft landed.
Captain Switzer is currently the Federal Security Director (FSD) at Lambert-St. Louis International Airport.  In 2011, he was named FSD of the Year and the airport was recognized as TSA Airport of the Year.  He will be a featured speaker at a future event at the Greater St. Louis Air & Space Museum.
Posted by Carmelo Turdo at 1:03 PM

Remember me Bill Switzer. I was the police officer who stopped you for speeding one morning on your way to work.
Thanks for your service GOD Bless.
Gerald Gaherty