St. Louis University's Parks College of Engineering, Aviation and Technology is proud to host SAFECON Region VI competition this week at St. Louis Downtown Airport.  The week-long event is sponsored by the National Intercollegiate Flying Association (NIFA) to encourage college student aviators to interact with fellow students at other institutions while sharpening their flying skills and aviation knowledge. The pace of today's activities is very different from that of the previous weekend - Monday's events take place at the beautiful Parks College St. Louis University campus in midtown St. Louis, away from the bustle of actual flying.  Following the opening welcome and contestant briefing from the contest judges, there were three written examinations to test the team members on their computation and navigation skills as well as their aircraft recognition knowledge.


Monday's opening welcome and team briefing were held at the Center for Global Citizenship at St. Louis University's main academic campus.  The newly renovated interior is in what was previously the 1920's era West Pine Gym and later the Bauman-Eberhardt Center.  The 70,000 square foot facility has found new life in its role of hosting events and activities that enhance the university's international education role. 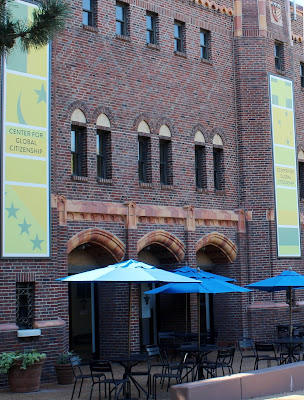 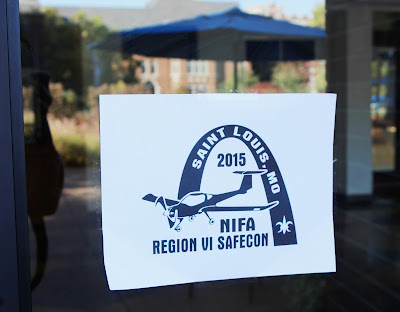 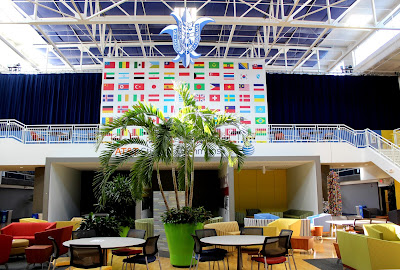 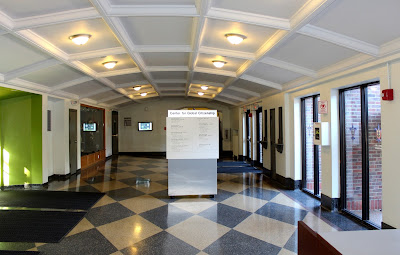 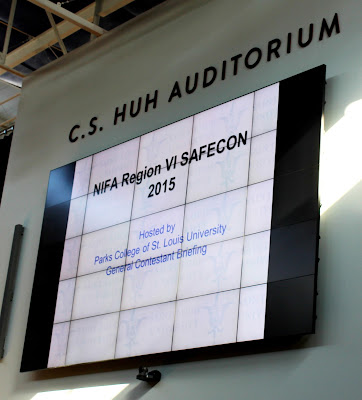 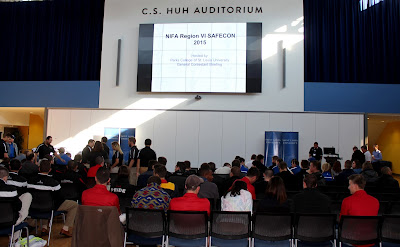 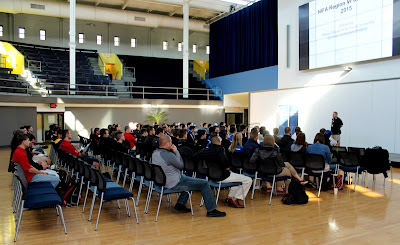 
﻿
﻿
NIFA Region VI Representative Scott Vlasek began the opening welcome by thanking the teams for arriving early, allowing the following written exams to begin an hour earlier than scheduled the rest of the day.  "I am here for all of you," he told the team members assembled in the auditorium.  "This is a competition - you are here to compete," he continued.  "But we want to do so in a professional manner, and with respect...Also remember that safety comes first and foremost throughout the week."  No doubt the teams have prepared to meet these expectations, and it was reassuring to hear the message again from NIFA.  The bulk of the briefing was conducted by the Chief Judge, Erich Hess, who also reached out to the team members to maintain open communication with him regarding any competition issues.  He then went into detail about the rules for each event and best practices for the flight operations.  ﻿﻿﻿﻿﻿﻿﻿﻿﻿﻿
Following the briefing and lunch, the teams gathered at nearby Tegeler Hall for the written exams, the first scored events of the competition.  In the Computer Accuracy event, team members must solve aircraft performance and navigation computation problems using a manual flight computer in a given time period.  The Aircraft Recognition Event tests the team member's ability to identify an aircraft manufacturer, model and name after viewing an image for only three-seconds.  Lastly, the Simulated Comprehensive Aircraft Navigation Event is a written exam that tests the team member's ability to solve problems related to planning a cross-country flight.
﻿﻿﻿
The Aero Experience was welcomed by the NIFA officials to attend the briefing, though we were understandably not allowed into the examination rooms.  A visit to the Parks College of Engineering, Aviation and Technology in McDonnell Douglas Hall was a great alternative:

﻿﻿﻿
﻿﻿﻿﻿﻿﻿﻿﻿﻿﻿﻿﻿
Tuesday's events will include a mix of flying and simulator time back at the Parks College facility at St. Louis Downtown Airport.  In the Navigation Event, competitors must plan and fly a route ranging from 70-120 miles using three to five separate flight legs.  Following the flight in the team's aircraft, crews will be graded on accuracy for time of each flight leg, total flight time, and fuel consumption. St. Louis University Flying Billikens Coach Jack Schwarz emphasized the importance of precision flying in this event: "Competitors will be scored based on how well they plan their route and also fly it as close as they can to their planning, including time to point, ground track to point, fuel burn during flight, etc."  Later in the day, pilots will participate in the Ground Trainer Event that tests their ability to fly in Instrument Flight Rules (IFR) conditions in the Frasca simulators.  Accuracy in maintaining altitude, airspeed and heading without ground references will be evaluated.
The Aero Experience will again be at St. Louis Downtown Airport to report on the progress of the St. Louis University Flying Billikens and the visiting teams as they progress through the Tuesday events.  Also, The Greater St. Louis Air & Space Museum will be open to receive visitors during special SAFECON Region VI competition hours: Tuesday, Wednesday and Thursday this week 10am-4pm, with additional Wednesday evening hours 4pm-8pm during the fly-in and social event at the museum.
Special thanks to NIFA SAFECON Region VI competition officials and St. Louis University for their hospitality during Monday's visit.
Posted by Carmelo Turdo at 9:15 PM