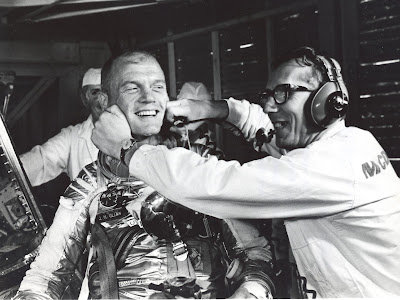 He retired in 1989, but still didn't leave the space program far behind. He worked as a consultant on Hanks' production "From the Earth to the Moon," and also worked with the team that recovered the Liberty Bell 7 spacecraft from the bottom of the Atlantic Ocean. That was the Mercury capsule Gus Grissom flew into space, but the spacecraft filled with water after splashdown and sunk.

He also returned to Kennedy on occasion and spoke with today's spaceflight engineers, technicians and specialists. In May 2009, Wendt told them to establish credibility, learn from mistakes and "think outside the box." He also told them, "Don't fake it. Always have the facts to back up your statements," and "never take things for granted."

Posted by Carmelo Turdo at 9:52 AM