Friday was a day of more arrivals and practice at the Cameron, MO Memorial Airport for most of the performers.  The day started off foggy, but it lifted early enough that it didn't cause any delays in what turned out to be a great day for Cameron and aviation. We arrived around 8:30 a.m. in time to get some unique shots of the aircraft with fog blanketing the airport. It lifted quickly, and soon the Aeroshell Aerobatic Team was at the airport preparing for some sponsor flights. This turned out to be great news for me as Steve Gustafson, who flies left wing for the team, informed my wife that they were getting me in the air with them as someone failed to show for their flight. So at 10 a.m. Jimmy Fordham, who flies slot, strapped me in, went over the necessary procedures for getting out if it was needed, and briefed me on what we were going to do. It was then taxi time and into the air. I'll cover more of what we did in a separate post, but it was a great thrill! 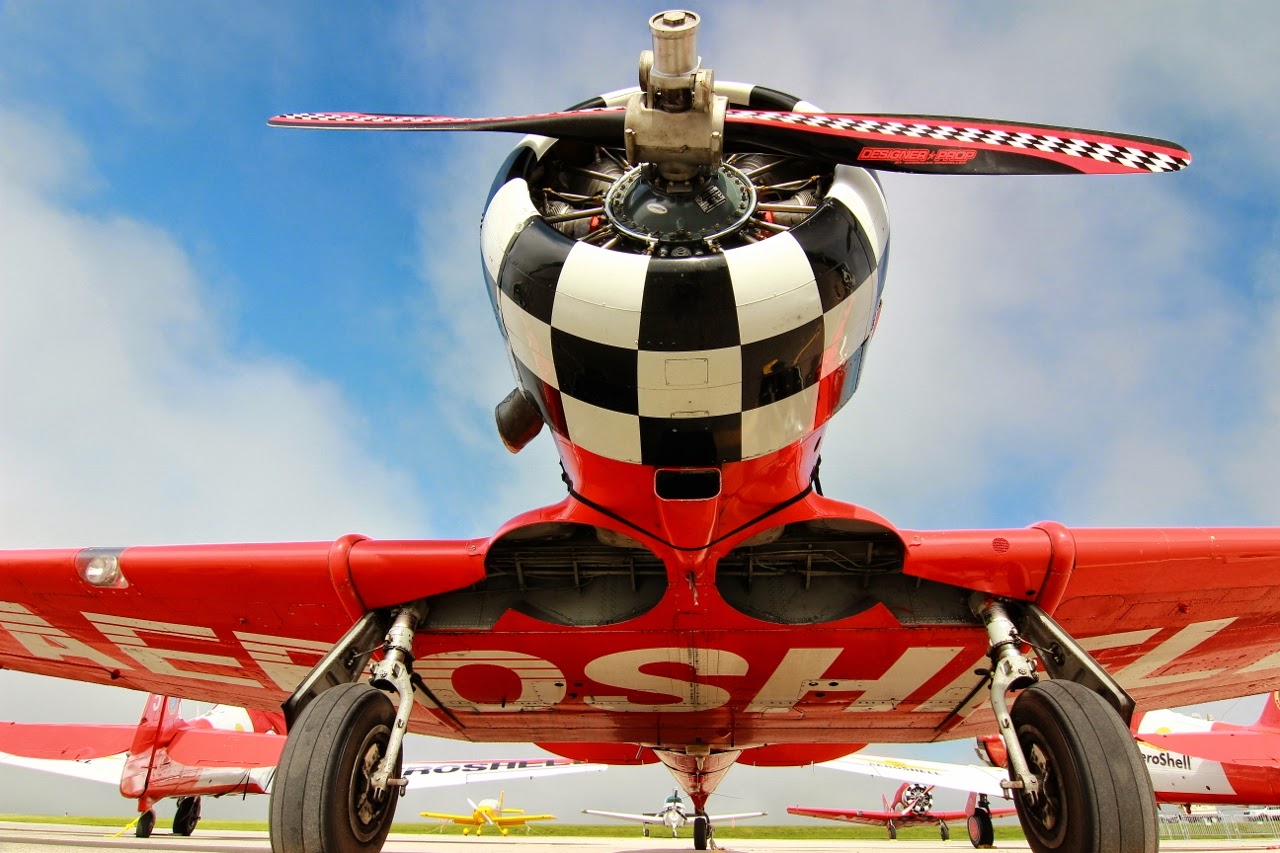 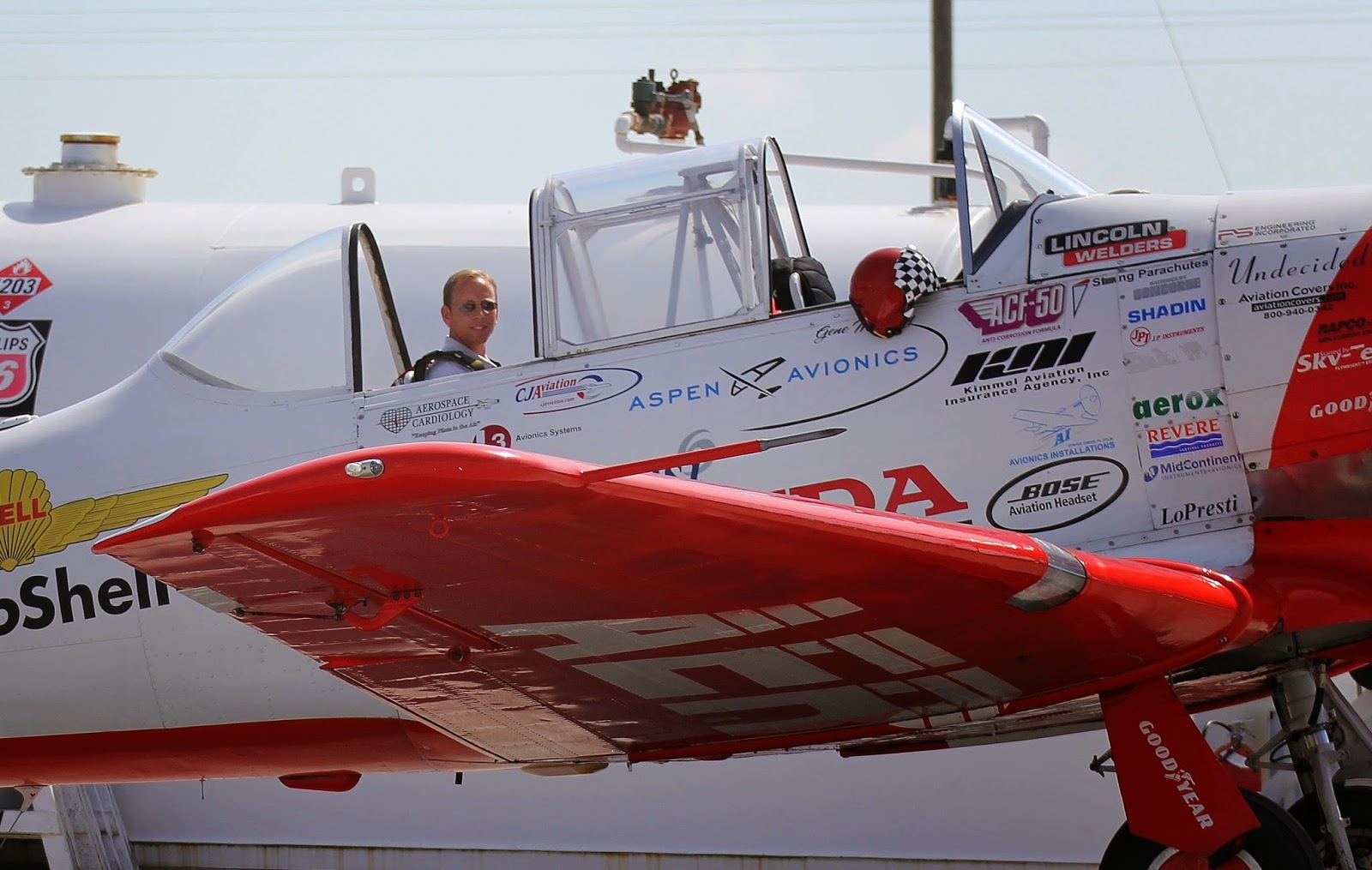 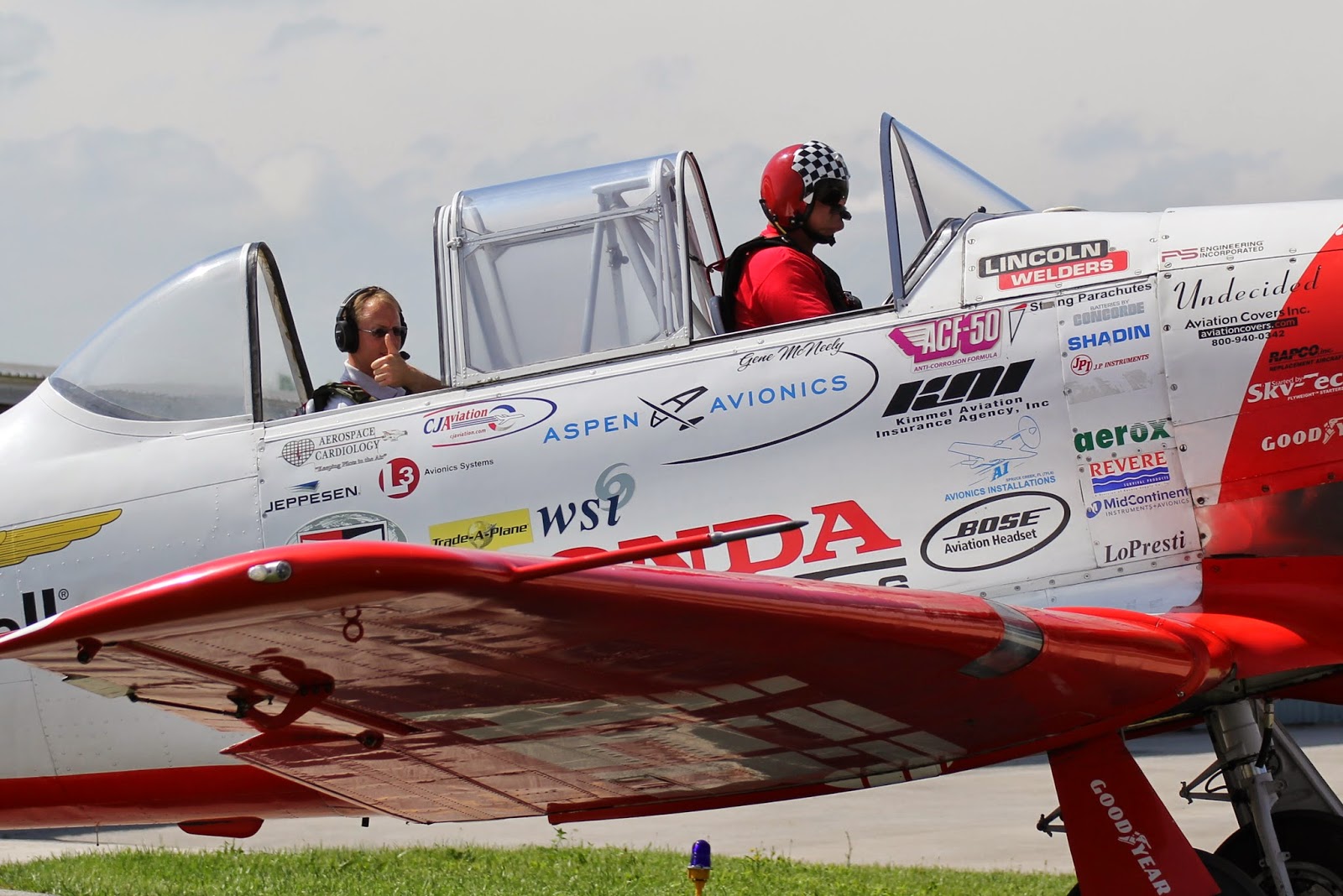 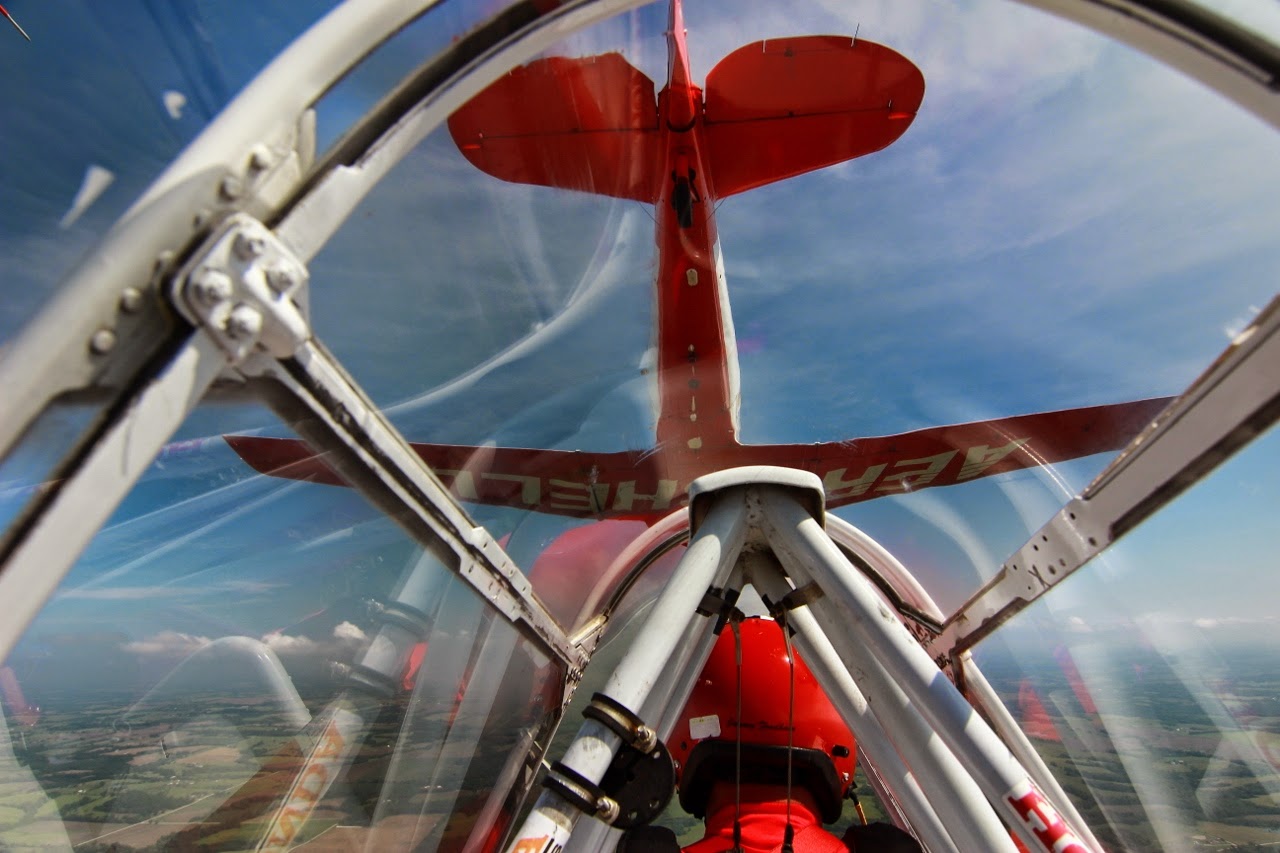 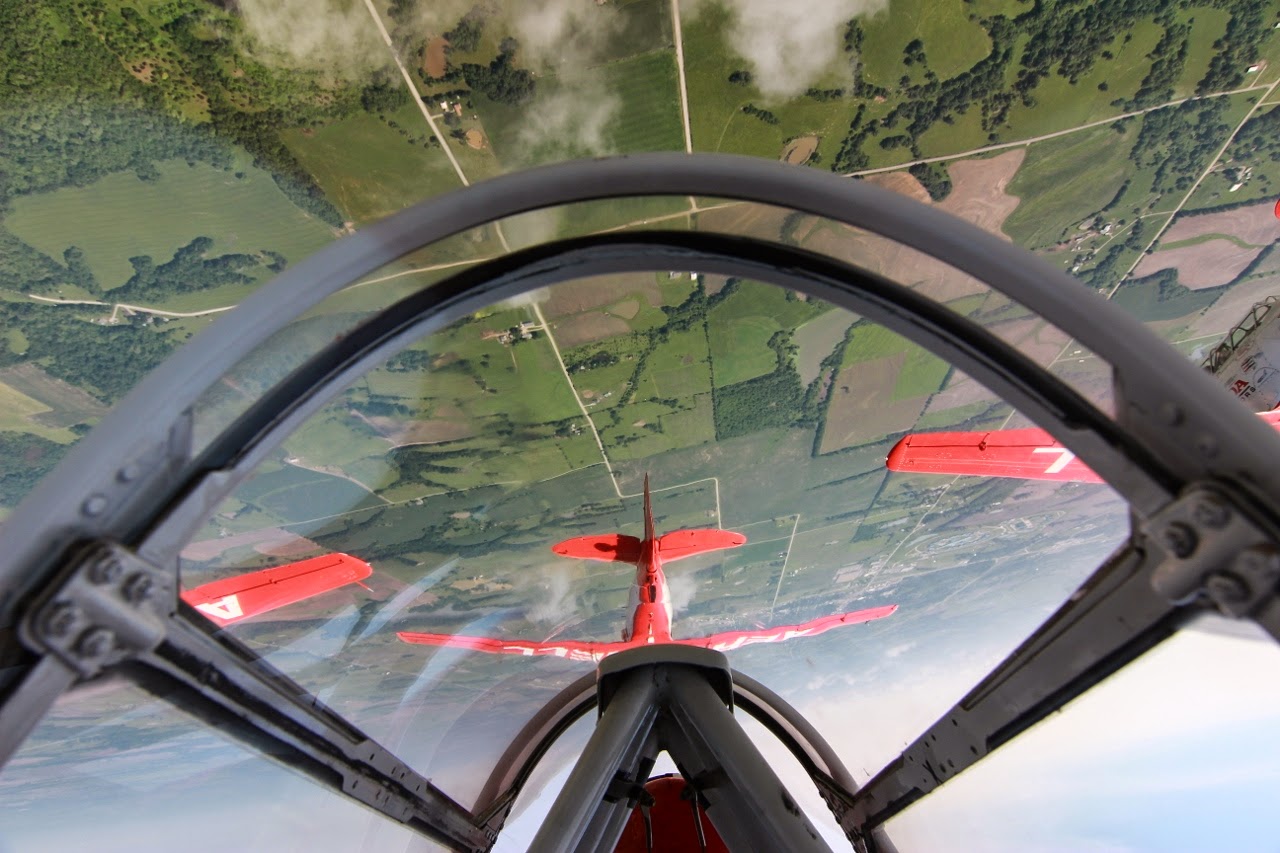 After I was back on the ground, it was time for arrivals.  The scanner came to life, and the tarmac quickly filled with airplanes. First in was Brian Correll, one half of Team Vortex in his Pitts. He was followed by The Red Stars formation team in their 4 Nanchang CJ-6's.  Bob Richards out of Lee's Summit, MO arrived next in his red and white Pitts. A good friend of The Aero Experience, Doug Gardner flew, in just before practice got underway in his 1983 Great Lakes Biplane. 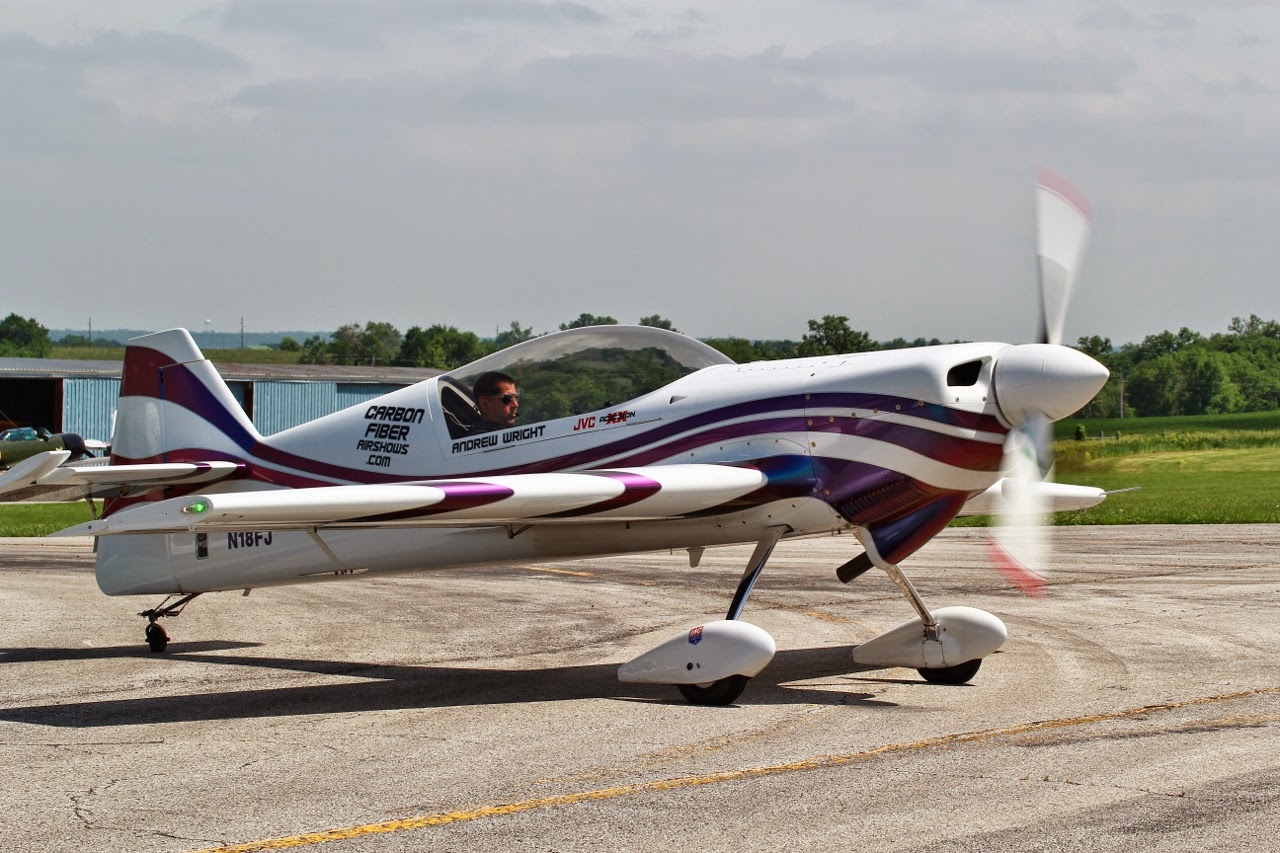 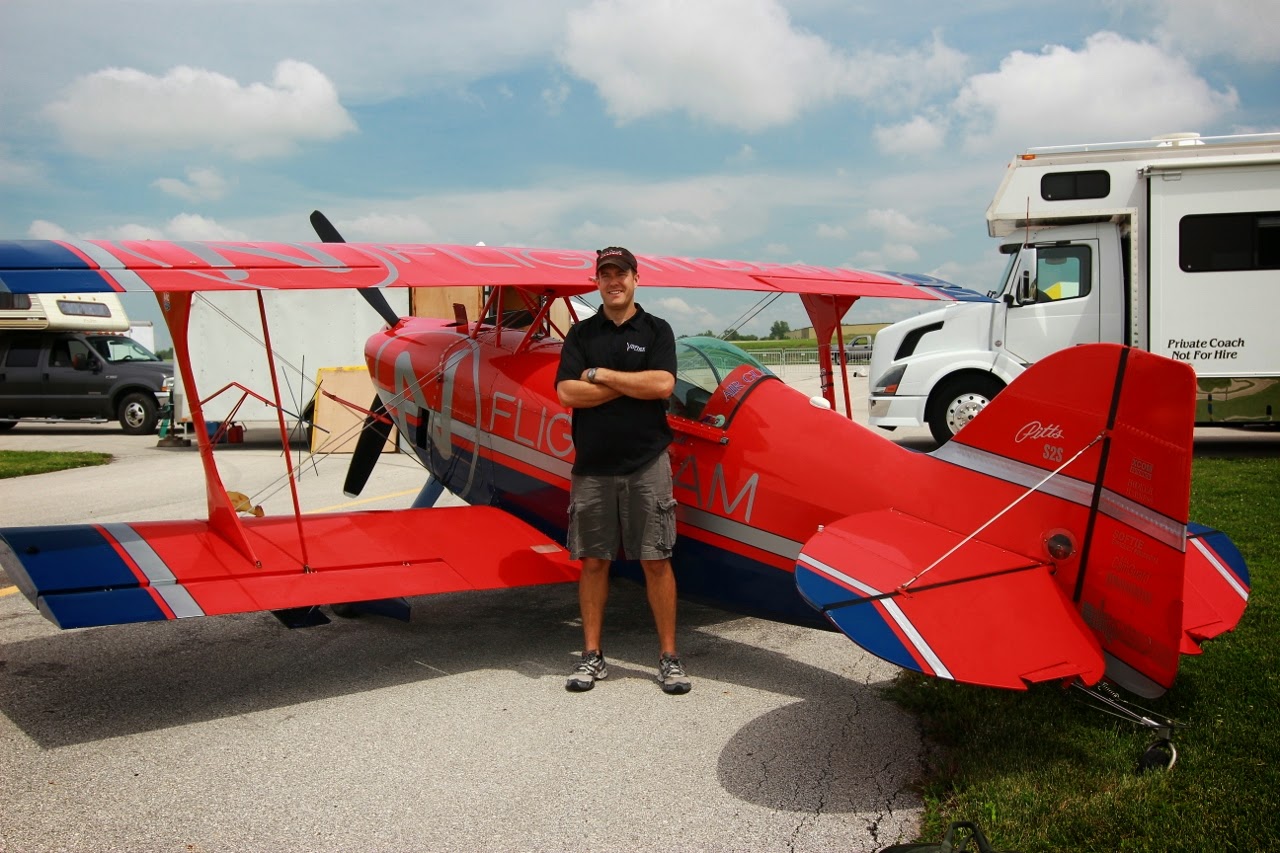 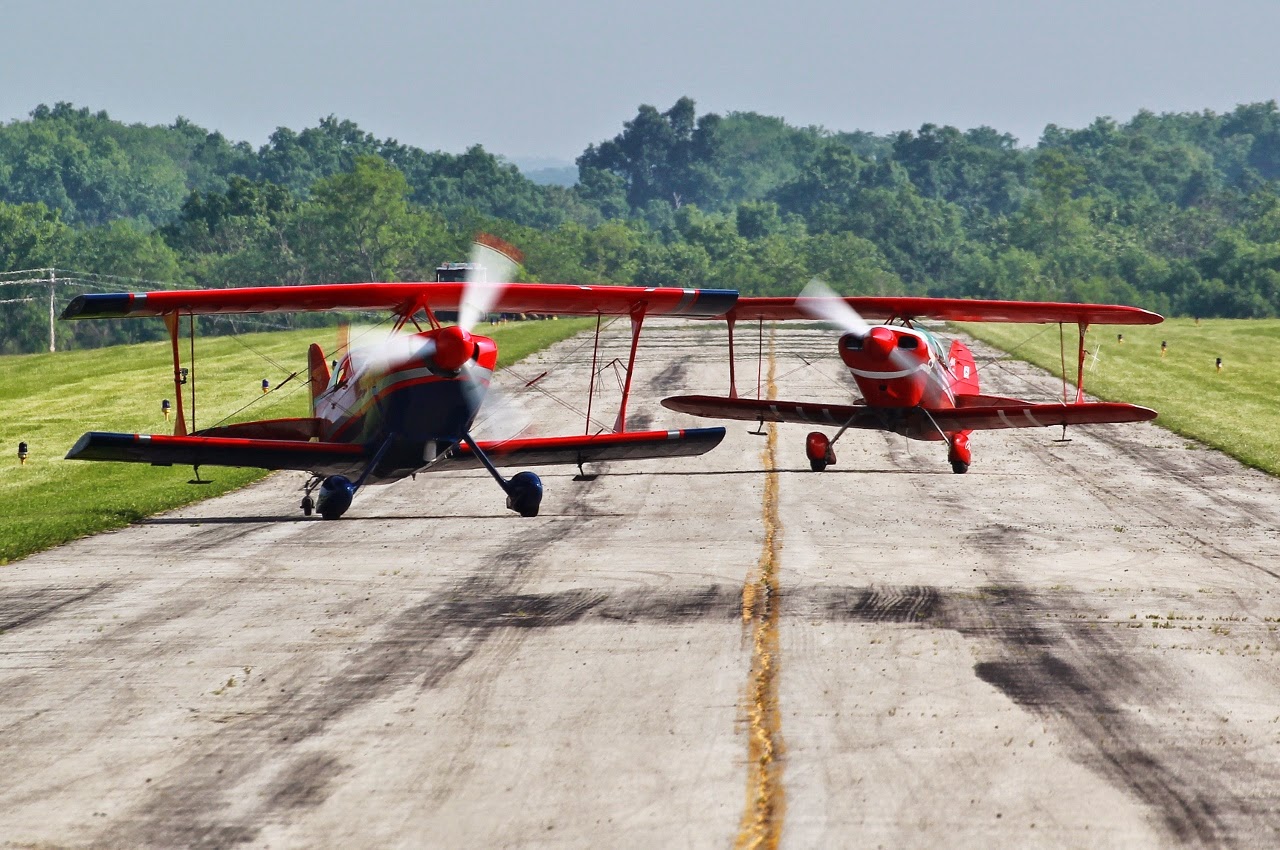 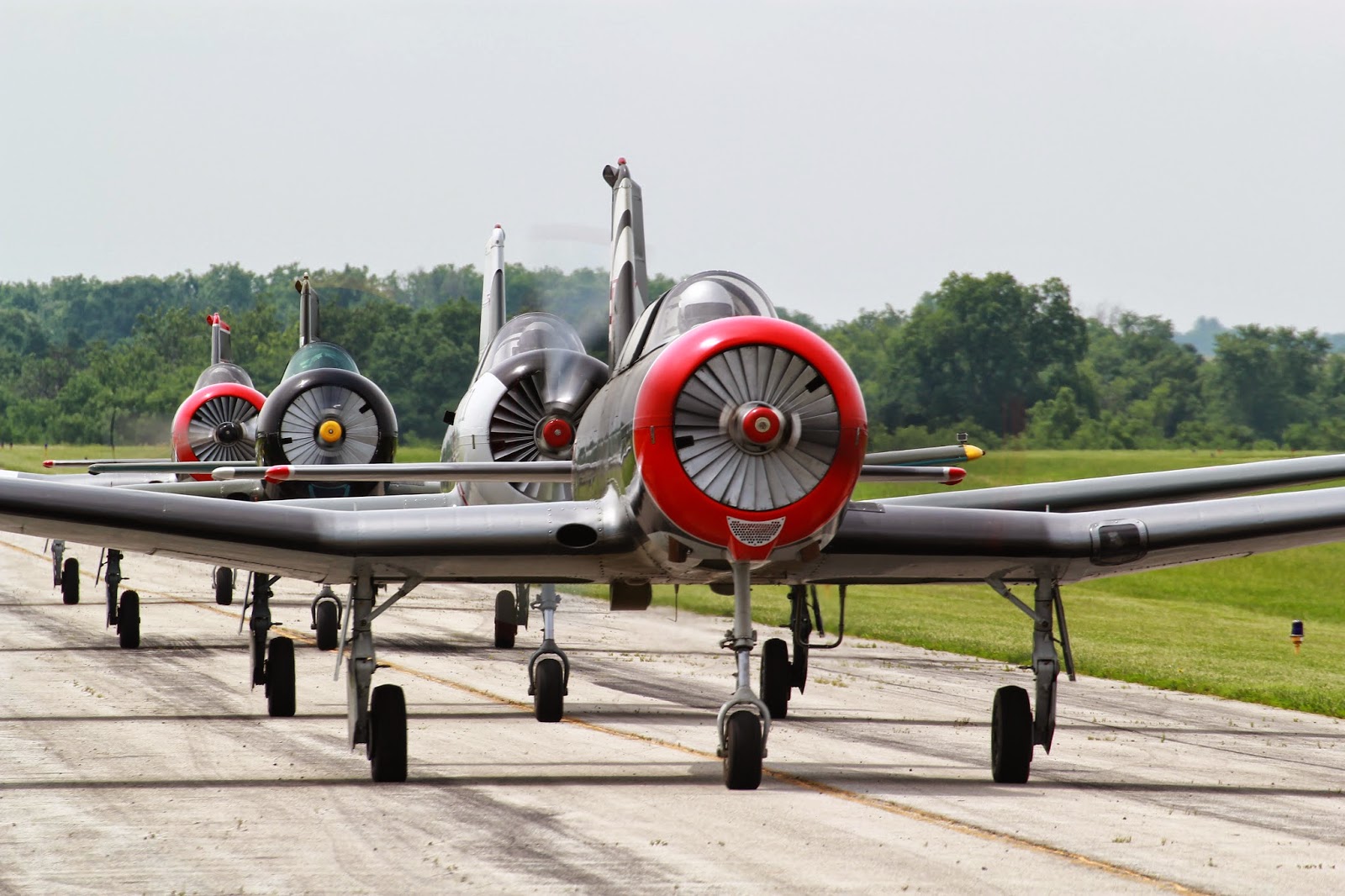 I had some really pleasant conversations with Bob Richards, Brian Correll and Andy Wright as they told me about their flights in, some of the maneuvers they would be performing and just some generally fun aviation related stories. All great guys, and the future of airshows looks bright with up and coming performers like these gentlemen who are as approachable and friendly as the other performers at the show.
We couldn't stay for all of practice as we needed to make the 5 hour drive home in order to attend the Midwest Airport Fun Days at the St. Louis Downtown Airport over the weekend.  The practice I watched Friday was one of the best I have ever seen at any show, period. Cameron Memorial Airport and the people of Cameron can hold their heads high knowing they had a world class airshow in their town. 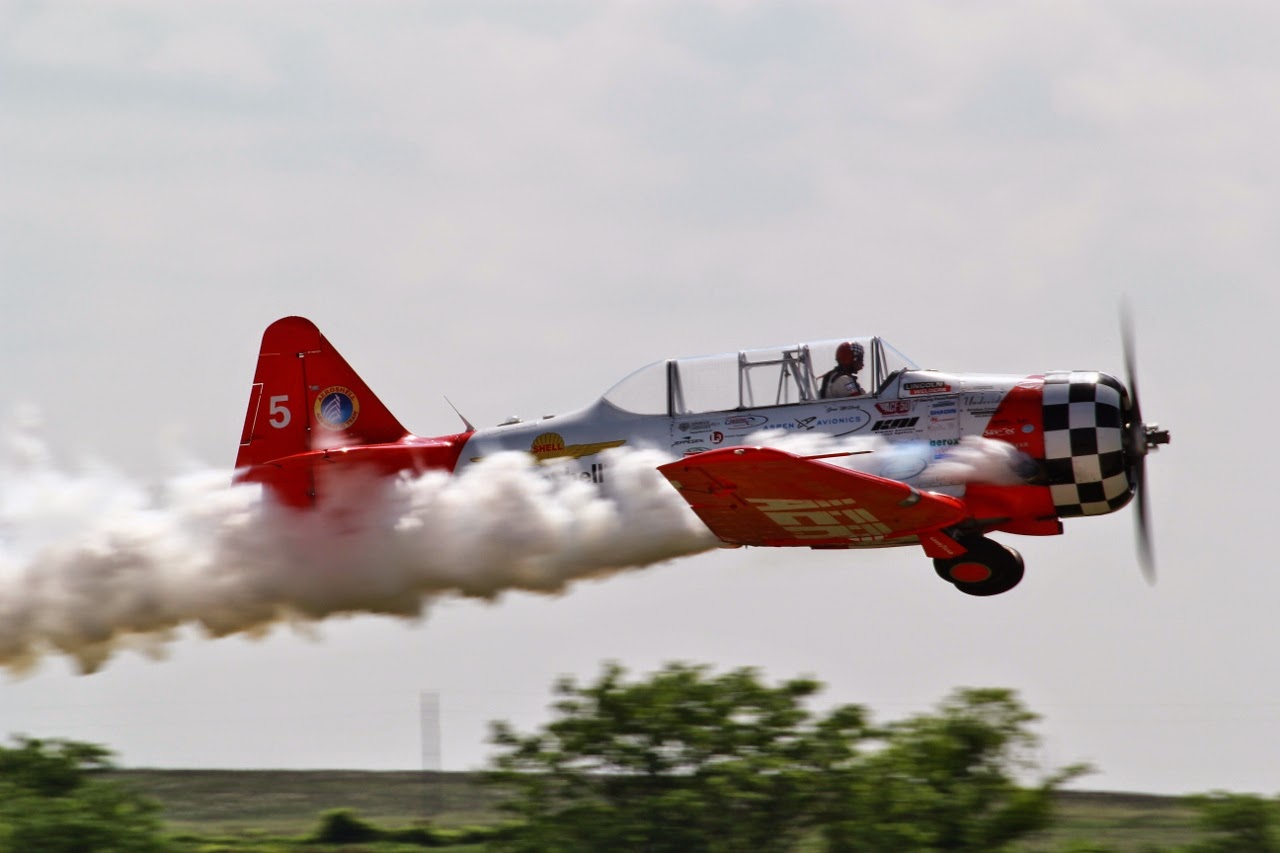 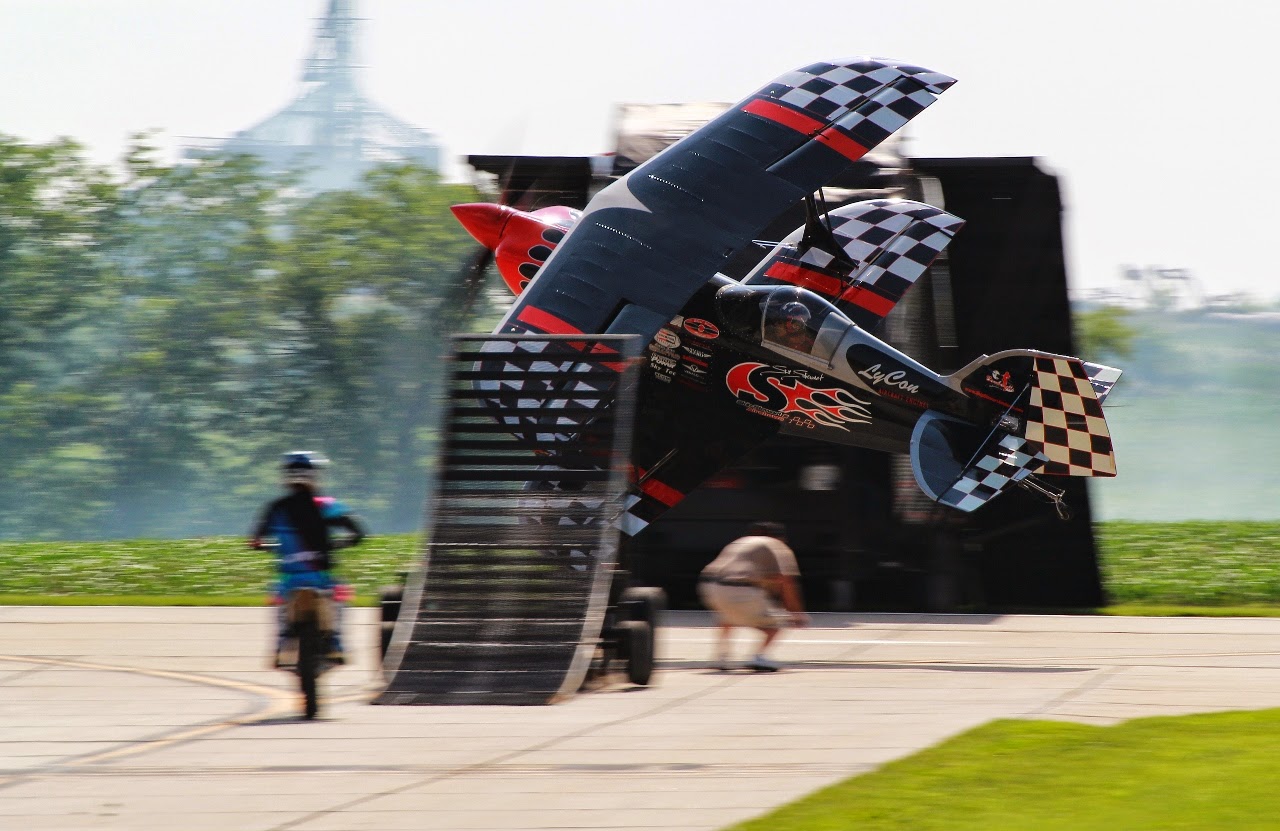 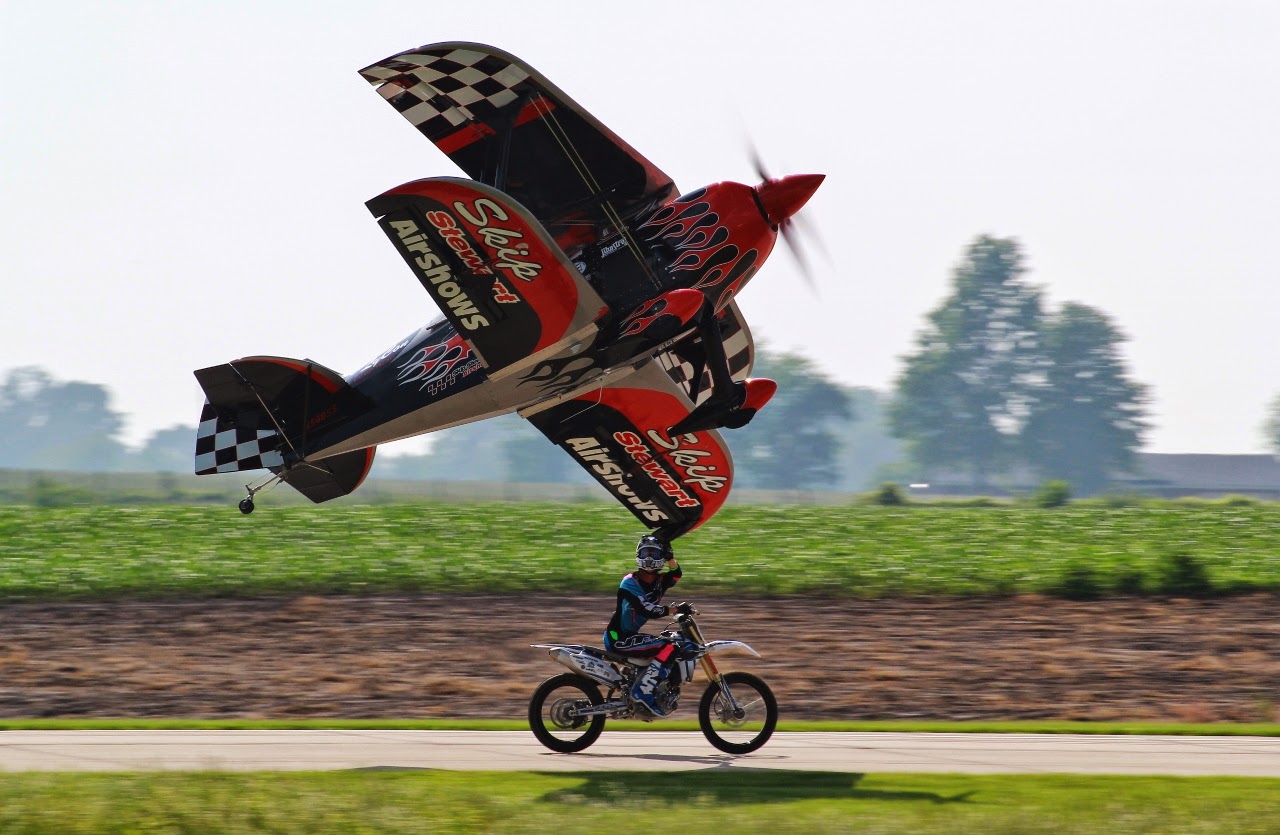 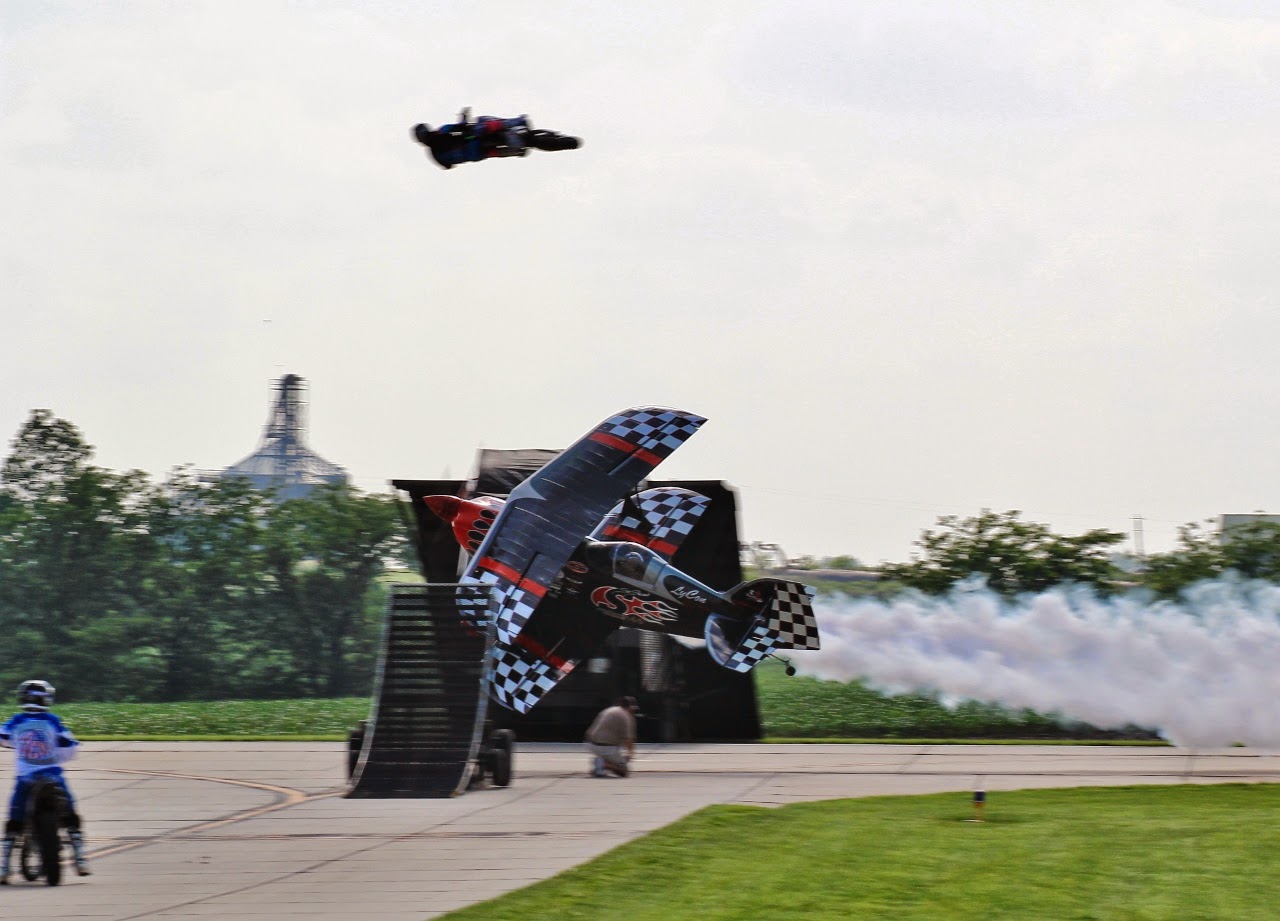 The Aero Experience would like to extend a special thank you to Eric and Lee for the access and hospitality while my wife, son and I were there. You've done a fabulous job and put together a great show that we will be sure to attend next year.  Another big thank you goes out to all the performers, as you are all great ambassadors for aviation and I look forward to seeing all of you again at shows in the future.
Posted by Carmelo Turdo at 11:00 PM

I love the photos of the vintage aircraft, especially the B-25 low pass. For many years an old B-25 sat out on the ramp at Battle Creek until one day someone came and began refurbishing it. I have often wondered where that airplane wound up.

Guess I should put on my aviator sunglasses, head out to the airport and start visiting some airports.